If the sun has got his hat on, there can be few better ways to spend a day in Riga than heading down to the Jurmala Beach Resort. A popular retreat as far back as the 18th Century, Jurmala was a favoured recuperation point of Russian soldiers recovering from wounds suffered in the Napoleanic Wars; whilst later, in the 20th Century, the area enjoyed major development and became the resort of choice for many high-ranking Soviet officials during Commnunism. Brezhnev and Khrushchev were just two of Jurmala's many fans!

Jurmala's most obvious asset is its 33km stretch of fine white sand, much of which is backed by attractive forest and woodland. Clean and shallow waters, with little in the way of crashing waves, also make for ideal swimming conditions - although those used to swimming in the Med. might have to toughen up a bit if they want to enjoy the somewhat testicle-shrivelling temperatures! 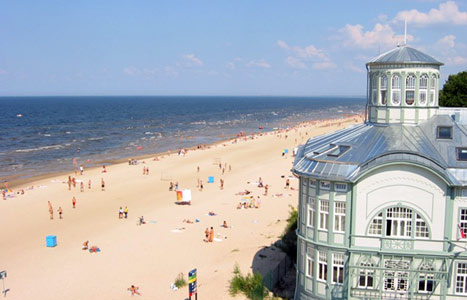 Another natural wonder that adds to the charm of the district is the beautiful Lielupe River, which flows all the way from Lithuania to drain in the Gulf of Riga. Before it does so it runs parallel with Jurmala beach, sandwiching the resort between river and sea. It's well worth a walk along the Lielupe where you'll be treated to a splendid view over the flatlands and towards the nearby forest, and if you're lucky you might see the odd fisherman casting a fly out from a decrepid looking hut.

Of course Jurmala really grew famous thanks to its reputation as first class spa resort. Fresh sea breezes and pine-infused air, combined with rich deposits of minerals in the local mud and spring water made Jurmala the perfect place to slowly recuperate from that life-threatening ingrowing toenail. Hence a number of large scale spa facilities were established over the years, particularly in Soviet times. After a natural decline in the late 80s and early 90s, spa tourism is back on the rise and you can check out what specific spa resorts are open for business in our play section.

Don't like the beach, it's too sandy? Don't like rivers, they're boring? Don't like spas, they're too girly? For the difficult to please amongst you Jurmala still has a few tricks up its sleeve. Fans of Art Nouveau architecture can check out the Baznica Church (Baznicas 13), fans of splashing about can check out the Aquapark, and nature fans can go birdwatching and walking in Kemeri National Park. Finally there's always the chance to eat and drink your fill in the ever-increasing number of Jurmala's bars and restaurants.