Riga was officially founded in 1201, just over eight hundred years ago, as German merchants came over to colonise the Baltics. By 1282 the city was granted admittance into the powerful Hanseatic trading league of predominantly German towns, allowing Riga to flourish. Since that time Riga has been a free town, part of the Polish-Lithuanian kingdom, part of the Swedish empire, part of the Russian empire and part of the USSR. This has always led to Riga being a cosmopolitan and ethnically diverse town, a fact reflected in today's population which comprises of only 45 percent Latvian people. The remaining 55 percent consitutes an almost equal number of Russians to Latvians, with Belarussians, Ukrainians, Poles and Lithuanians making up the last ten percent or so. Some hostility exists from Latvian nationals towards ethnic Russians, stemming from the history of Soviet occupation and the widescale deportations of Latvians that took place in the early days of Soviet rule.

Riga is in fact the largest city of the Baltic states, despite a relatively small population of 800,000. It has a large Old Town (Vecriga), which stretches alongside the Daugava river, and boasts a number of historic monuments, the most striking of which are the Doms Cathedral and St. Peter's Church; whilst the area of Riga referred to locals simply as 'the centre' is famous for its Art Nouveau (Jugendstil) architecture. The Historic Centre of Riga as a whole is included on the UNESCO world heritage list.

Riga is also home to two of Latvia's largest academic institutions, the University of Latvia and Riga Technical University; it houses the Latvian parliament (Saeima); boasts the largest airport in the Baltics - Riga International Airport; and can claim the tallest building in the Baltics - the Riga Radio and TV Tower. Riga maintains sister relationships with cities around the world, including Moscow, Beijing, Dallas, Santiago, Stockholm, Florence and Slough. 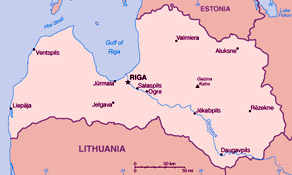 One of the three Baltic states, Latvia at 64,600 km. sq. is fractionally smaller than its southern neighbour Lithuania but larger than its neighbour to the north, Estonia. Along with its fellow Baltic states it achieved indepedence from the USSR in 1991 and accession into the European Union in 2004.

Latvia is lucky enough to enjoy a large stretch of coast on the Baltic sea, whilst the inland regions are predominantly low-lying swampland, forest and fertile plains, with many small lakes. Latvia's highest points are found in the Morainic Hills in the East. The river Daugava, which springs from the Valdai Hills in Russia and flows through Belarus is the largest in Latvia, draining into the Gulf of Riga.

Latvia's population is made up of only 60 percent of ethnic Latvians (predominantly Letts and Latgalians, two 'tribes' of Latvians), whilst nearly 30 percent is made up by Russians and some ten percent by other minorities of the ex-Soviet states. Only 54% of Russians however hold Latvian citizenship, as a number of measures to stem Russification of Latvia were put in place following independence - however children born to Russian parents after 1991 are now automatically granted citizenship. The Latvian character is said to be calmer than the sometimes hot-headed Lithuanians yet more passionate than the often reserved Estonians.

Overall Latvia is enjoying a prosperous time in its history with plenty of foreign investment and a steep rise in tourism forging one of the fastest growing economies in Europe. In a sense Latvia is enjoying its first secure term as an independent country, the last period of independence being a fleeting glimpse of freedom in the interwar period. The Latvian song festival, which began in 1873, is a symbol of the Latvian national identity (Estonia and Lithuania also have such festivals), and has earned Latvia the tag 'The Land That Sings.'

Yes, this street still has the same name. Just type Lacplesa iela Riga in any interactive map and you will find it :-)

I am a Russian/Latvian Jew. I was born in Riga in n 1969, and immigrated to Brooklyn, NY in 1980. Now I live in Florida. When I lived in Riga I lived on Lachplishes Street near the cinema. I would like to know if the name of that street has changed and if it did what is it now. If it still the same please help me find it on a map of Riga?

I am a Russian/Latvian Jew. I was born in Riga in n 1969, and immigrated to Brooklyn, NY in 1980. Now I live in Florida. When I lived in Riga I lived on Lachplishes Street near the cinema. I would like to know if the name of that street has changed and if it did what is it now. If it still the same please help me find it on a map of Riga?

IT WAS A NICE COUNTRY I LIKE THE COUNTRY VERY MUCH