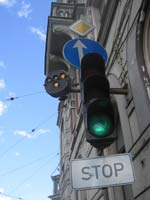 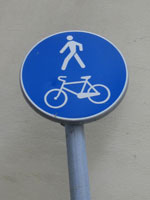 The weather in Riga changes more often than the traffic lights and seasoned pros carry a sweater and umbrella with them at all times. It's not uncommon to be boiling hot, a little bit chilly and soaking wet in the time it takes to enjoy a single beer on one of the city's many outdoor verandas.

Latvians are proud patriots, and an appreciation of their history and culture will get you a long way if you are planning on making friends. If in doubt steer the conversation towards ice hockey as this is one thing that the dimunitive country excels at. Pretend to know who Sandis Ozolinsh is and you'll be bought beer all night (The NHL veteran is also the man behind Latvia's first 18 hole golf course)

Smoking in most public places is banned in Latvia, which includes - in theory at least - bars and restaurants without a designated and ventilated area. If in doubt ask before you light up, or simply go outside.

You can't smoke inside and you can't drink outside! What kind of country is this! Police will act if they see you sinking a swift can on the street.

If you're an internet addict you'll be pleased to know that Latvia is as far removed from the dark ages as most European countries and offers an increasing number of WiFi spots. You can log on at any joint of the ubiquitous Double Coffee chain or surf in style at the Sarkans restaurant (Stabu street, 10).

When it comes to thaw time, usually around late February or March, it pays to look upwards. Large overhangs of snow and ice can fall with force from high buildings and cause a cold neck at best - or a broken one at worst. Walking in the middle of the street is a good safeguard.

Above: An ambiguous green light

Below: Bicycle stuntman up ahead

Salt'n'Pepper EB: Food so so, service terrible Riga Post Office Jelena: I have tracked my package from NJ to Latvia. I received the following messages: Customs Clearance Processing Complete LATVIA and this morning: Your item could not be delivered on February 24, 2021 at 8:01 am in LATVIA due to the addressee not available at time of delivery. It is being held while the addressee is notified. When my niece called the local post office they said that need to clear the item and most likely she will pay the fee. For what? A few presents? After I received the message that it was cleared? Who works in these facilities and do they have a manager? Unbelievable! Naree-Siam Thai Massage and Spa ventura: very good massage just like in thailand . good service not rushed Naree-Siam Thai Massage and Spa Naree Siam Thai Massage and Spa: We are happy to announce that the Riga Salon will reopen 25 of august 2020.