With a mere 1.5 million native speakers and only 3.2 total speakers you have to be a pretty dedicated linguist to want to get to grips with the tricky Latvian language. Still, if you're desperate to be a member of this elite club (ie. you got hitched to a Latvian wife and can't understand what she's shouting at you) then read on for a few pointers!

The Latvian language is one of two Baltic languages, the other being Lithuanian, that evolved from Indo-European. Latvian boasts a hearty 35 letters, 22 of which you will find in the English language and 13 of which look suspiciously familiar except for the curious dots and dashes floating above and below. Clever people refer to these 'extras' as diacritical marks, but no need to tax yourself - just know that they affect the pronunciation of the letter in question. 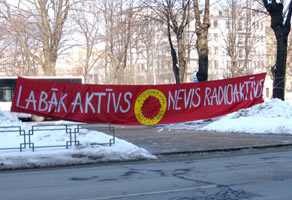 Here are a few handy phrases that are sure to see you through ninety nine percent of situations you might encounter in Riga... Remember the stress always falls on the first syllable! Es nesaprotu
I don't understand Vai Jus runajat angliski?
Do you speak English? Vienu alu, ludzu
One beer, please Es tevi milu
I love you Cik jums gadu?
How old are you? Kolosāls
Terrific Jūs esat brīnis Cik tas maksa
How much does it cost? Ludzu, rekinu
The bill please

When it comes to grammar there's more than enough to keep you busy for a decade or two. Nouns boast a healthy six declensions and six cases (just think of the permutations!) and whereas verbs only come in three simple and perfect tenses there's always the five moods to consider. Probably you can feel a thin film of perspiration on your forehead by now, but no need to panic just yet. Take a peak at our simple words and phrases and you'll have plenty to help you through a long weekend!

If you've got some good ideas on how to make our language section better, let us know!

i want to learn this language

Hello! If you're still looking for a chance to study Latvian, I offer to study it. If you or others are interested, write me - lbrizga@gmail.com

My woman, the love of my life, speaks beautiful Latvian and if you heard her you'd think you'd tuned into Angel FM (...oooerr...I'm in love)

I speak perfect German. Is this language still used in Riga as a spoken or even commercial language

I just moved to Riga and I need to take a Latvian language course, preferably intensive. I appreciate any information and a good apartment rental hint too.

how you say , sweetheart to your latvian girlfriend ? or baby ? or anything nice !!

All I know is that I like this language very much. My wife (latvian) tells me I have it easy for I am spanish speaker, compared to english-spoken people that seem to have so much problems to get the concepts of latvieðu valoda...I don think it's in extinction: the identity of this country is such so strong... :)

Hi I moving to Latvia-Riga and I wanna know where can I go for to learn me this languages ///not body know???

Btw, Latvian language is the most similar language to old Sanskrit.. our nation has very deep roots and interesting history.

All languages are beautiful including Latvian.It's good for each individual to extend themselves either by language or other skills, for their own self esteem.For those comments against the Latvian language "have you learnt another language" you believe to be more useful to improve yourself? Or can you ONLY write disparing comments?

one of the most interesting languages of europe, not of the dying kind, I think baltic languages will have a revival in the near future. It is a key to many questions in linguastics. Besides its a cool language, spoken by few, but so cool!!

Latvians have their own language, kept for ages and closely realted to original Indo-European. Americans and Australians do not even have a self language nor culture, and some of them cant even be aware of other different people existing all arround. Latvian language is useful and hard to learn as well. Surely not as extended as other languages, but handy to interact with Latvians (as you ignorants, cant speak Russian either). They say learning hard (inflected) languages keeps your brain younger for longer, so there might be a cure for you.

can you give us the latvian equivalant of 'do you have a single brother' "would you like to live with me in australia", and 'can we take our clothes off now'

Who would want to learn a dying language, spoken only by 2 mil people? :)) that's a good joke

Latvian has 11, not 13, "special" letters (with diacritics). "R with cedilla" is used only in diaspora, and even with this that would be only 12. Writing examples without diacritics is totally senseless, at least not without a pronunciationguide.

I like Latvian I was in Riga Jan 2007 to meet a friend she became ill so I didn't get to see her much (10 Min the day I had to go home) I didn't have a hard time talking to Latvians as for a lot of them also speak some English and if not they were steel willing to try to help me and understand what I needed or help.

I think it is good to know a second language fluently. Having travelled abroad, I feel lost not knowing the language.

it's a beautiful language! y'all must be some sweethearts over there! i would love to see riga and ride my bike.

It's a beautiful language! I have spoken and understood it all of my life. No one should pay any attention to the low-class, non-cultured comments of some of these people.

I think it's a terrible language to learn. Nobody needs it anyhow, except Latvians.

You poor arrogant fool, yes it hard to learn but so is any foreign language if you are not interested or ignorant

Salt'n'Pepper EB: Food so so, service terrible Riga Post Office Jelena: I have tracked my package from NJ to Latvia. I received the following messages: Customs Clearance Processing Complete LATVIA and this morning: Your item could not be delivered on February 24, 2021 at 8:01 am in LATVIA due to the addressee not available at time of delivery. It is being held while the addressee is notified. When my niece called the local post office they said that need to clear the item and most likely she will pay the fee. For what? A few presents? After I received the message that it was cleared? Who works in these facilities and do they have a manager? Unbelievable! Naree-Siam Thai Massage and Spa ventura: very good massage just like in thailand . good service not rushed Naree-Siam Thai Massage and Spa Naree Siam Thai Massage and Spa: We are happy to announce that the Riga Salon will reopen 25 of august 2020.