Here are a few things to bear in mind during your stay in Prague. First off, as in any modern European city, keep your wits about you and try to…

Above: Probably not the most popular way to get to the city... Left: Fly in and get an aerial view. Below: Most likely the easiest way to get…

Above: Going underground! Left: Trust the tram driver, he's a pro! Below: Follow the golden rules and you'll be fineBy Public Transport Getti

The Czech currency is called the Koruna (CZK) and the exchange rate usually sits at about 28 Korunas to 1 Euro. Goods and sundries are expensive for…

We're not going to lie to you: the Czech language is VERY hard for English speakers to get to grips with. We won't go into all the complicated…

The story of Prague is no less turbulent than that of similarly large cities in Central Europe. It saw its first golden age under the rule of Charles… 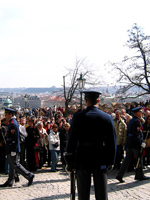 Above: Annnnnd break! At the Prague Castle Below: Overlooking Vaclavske Avenue at night 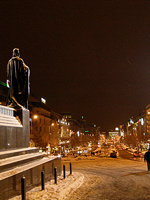 It seems like most Central European cities' attractions lie squarely with their Old Town, but in this, as in many things, Prague is an exception to the rule. Though the Old Town does hold a historic square and several interesting museums and cathedrals, as well as its ancient Jewish Quarter, a proper visit to Prague requires some wandering outside of its cobblestoned old centre and into its many central neighborhoods. With its own Castle district, a New Town brimming with excitement, and the unfortunately named Lesser Town - where lesser is greater - Prague's sights and sounds will occupy the weekenders as well as the permanent ex-pat.

Since 1992, the entire Old Town has found itself in an exclusive club - the UNESCO list of World Heritage Sites - the anthropological equivalent of being on the guest list of Studio 54. Prague therefore is quite proud of their centre, and most houses have been renovated and the streets swept clean of their communist past. The best place to start to explore the Old Town is the main square, which holds the Astronomical Clock and Old Town Hall Tower, as well as many historic churches and old houses. Just north of the Old Town is Jozefov, the historic Jewish quarter of Prague, where several surviving synagogues still stand and hold services.

From Jozefov, one can take the Manesuv Bridge over the Vltava River and enter the Castle District, or Hradcany. At this point all you need to do is look - and go - up! While the climb up the castle's steps might be strenuous - and a bit dangerous in the winter thanks to the thick layer of ice and snow covering them - the view from the top is well worth the struggle, and it'll help you burn off those extra pilsner pounds. Exploring the Prague Castle itself could be an all-day event, so we recommend getting there early, as in the summer the tourists begin lining up even before opening time.

Once you've given the Prague Castle a proper storming, head downhill (ahh, relief!) and south to the Lesser Town. Though not as historically mature as the Old Town, the Lesser Town features several interesting sights and museums, as well as a multitude of churches and concert halls that fill the atmosphere with classical music every summer. The Lesser Town also hosts some of the cutest and coziest cafes and restaurants, which are usually not as crowded with tourists as in the Old Town. Once you've done a fair share of exploring the Lesser Town, be sure to cross the famous Charles Bridge back to the Old Town, and head south down the Vaclavske Avenue, past Wenceslas on his horse and the National Museum, to the New Town, where you'll find parks galore (and the Prague Botanical Gardens). We recommend the park behind the Prague Central Station, where you can sit on a hill, watch people playing with their dogs, and take a breather above Pragueâ¦

Want to explore further? The Prague Life team has written more detailed guides to each district of Prague (Old Town, Jewish Quarter, New Town, Hradcany, Lesser Town), as well as plenty of information about sights in our culture directory, so get out there and explore!

Prague is an amazing city. Everyone should visit it at least once in their lives!

Hoping to visit Prague this year. ~Found this wonderful website which is making me even more exited, can't wait for our trip. Thank you

I like this website and there is a lot of useful information for us. It is clear that the talented person designed this website. He/She is really talented and successful. Thank you for it. However,Prague Map does not working. I hope you will repair it so we can easily put it account. Thank you again...

love your site, but the PDF download for the city guide is not working for Prague. File may be corrupted?

Prague Gay Pub Crawl Squier: If you arrange a private pub crawl with us, our guides David or Vojta will make sure that you will fully enjoy every minute of it. Darling Cabaret David: Open Again.... Much more younger girls. :-) We you their limousine for free.. Ambiente Rozamond: When we talk about Tomas Karpisek, the founder of the ubiquitous Ambiente group of restaurants, on our Prague food tours, we often describe him as the “Steve Jobs of the Prague culinary scene”. Sure, it's overstatement, but it’s not that far off. If there is anyone who sets food trends in the Czech Republic, it’s Tomas. The appearance isn’t that far off, either: we’re yet to see Tomas in something that even barely resembles a business suit. He’s more of a jeans-and-a-t-shirt guy. Also, just like the late Jobs, he’s a visionary of sorts and has a bigger plan, too. And he’s undoubtedly one of the most respected personalities on the food scene, as witnessed by our interview with Hana Michopulu, the owner of the popular Sisters bistro. Manufaktura Doina Alexe: Excelent shop!