The Golem of Prague is ever-present - from postcards to souvenirs to books, you can't avoid the creature in the city. But what exactly is a golem anyway? The original word "golem" has Jewish origins, meaning an "animated being created entirely from inanimate matter." Though legends of golems exist from long before Prague was settled, such as in ancient Jewish folklore, our favourite animated being is a relatively modern creation, created by a Rabbi named Yehudah Levi ben Betzalel (or Loew in some sources) of Prague, known as "the Maharal." 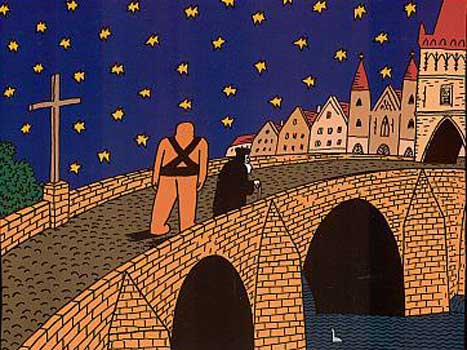 According to legend, the Maharal created his Golem from the mud of the river Vltava to help save the Jews of Prague from the malicious accusations of blood libel, or the belief that Jews used the blood of a Christian child during Passover. Dead or murdered Christian children would often be planted in Jewish houses for priests to "discover" and incite the masses to their pickaxes and torches, as the masses liked to do.

Besides the playful art featuring Prague's Golem by Fun Explosive adorning postcards and posters for sale at all the tourist spots, a statue of the Golem of Prague stands at the entrance to the city's Jewish sector, reminding locals and visitors alike that Prague is indeed a city of Golem. And because no legend is real without merchandising, behind the New Old Synagogue postcards, T-shirts, and miniature Golems of Prague are sold to all.

Where is the Golem Statue??? I'm in Prague now and nobody seems to know anything about it. Please advise before I leave Prague. I need the specific location in the Jewish Quarter. Thanks!!!

i'm trying to discover the name of the sculptor who created the golem statue at the entrance to the jewish section of prague. also, pertinent facts, dates, etc. this is for a paper to be read at a conference on Sept. 24, so time is of the essence.