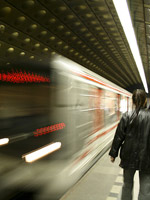 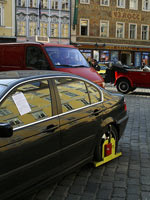 Here are a few things to bear in mind during your stay in Prague. First off, as in any modern European city, keep your wits about you and try to avoid looking too much like a tourist if at all possible. Central Prague is as safe - if not safer - than most large Western cities, but it always pays to be vigilant. Check with the tourist office before going for a midnight wander anywhere outside the centre.

Smoking is most definitely permitted in public spaces (except for public transport) and you should expect funny looks and withering put-downs if you ask someone to extinguish their cigarette outside a designated non-smoking area (such as those found in 99% of restaurants).

Service charges are rare in restaurants and cafes but check the bill just in case. Tipping is expected instead and 10% is considered to be the respectable amount.

The weather in summer is generally sunny and hot, with temperatures hovering around the high 20's C. Winter is very cold however, so if you're planning a romantic snowbound trip then don't forget to pack a hat, gloves, and some thermal underwear!

If you have a laptop then a cheaper alternative to using internet cafes is to log in to one of the many public wireless networks that exist in the city centre. At last count there are over 100 such hotspots so you should never be stuck without internet access. Most cafes advertise their free WiFi at the door.

Whilst businesses love the increased trade provided by large groups of tourists - stag, hen, football/rugby tours etc. - previous bad experiences have made the locals twitchy when confronted with large groups of (usually British) people hellbent on drunken oblivion. If you're coming as part of such a group then please remember that you're a guest in their city and that you should treat it, and them, with respect. If you don't then you'll soon find that local police won't be afraid to do the same to you.

Above: catch the underground to save your feet some grief!

Below: don't park illegally or you'll get a nastier surprise than your usual pigeon poo!