The story of Prague is no less turbulent than that of similarly large cities in Central Europe. It saw its first golden age under the rule of Charles IV in the 14th century. Prague was, at that time, the third largest city in Europe and witnessed something of an explosion in construction: the Charles University, the New Town, the Charles Bridge, and Saint Vitus Cathedral were all built during this period.

Most of the following centuries were passed in the same manner as other major central European cities i.e. in a frenzy of murder, battles, occupations, and looting: all of which has enriched the history of the place but was mighty miserable for the poor inhabitants of the time. After the German invasion Prague became the capital of Czechoslovakia, and remained relatively unscathed during the German occupation and Russian liberation. The Americans inadvertantly bombed the city in 1945, killing hundreds of residents, after somehow mistaking it for the German city of Dresden (which lies some 83 miles away).

Prague suffered in much the same way as the rest of the country during harsh Soviet-imposed Communist rule, and it was here that the Velvet Revolution was born and completed in 1989. Today, Prague is indisputably a modern European city and is becoming the capital of Central Europe. Many large companies have their regional headquarters here and the city is an enticing investment location, despite being more wealthy (and therefore expensive) than many Western counterparts. 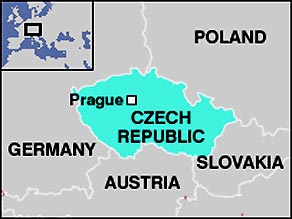 Like most Central European countries, the Czech Republic's history is, to say the least, eventful! The modern form of the country took shape in the 9th century under the kingdom of Bohemia, the power and authority of which was undermined by numerous wars, including the Hussite wars and the Thirty Years War. Following struggles with the ruling Habsburgs (of Austria) in the 16th century, the country plunged into a dark age which was relatively quickly followed by a national revival. A compromise in 1867 led to the mammoth Austro-Hungarian Empire taking over, a state of affairs that continued until the collapse of the Habsburg empire at the end of the First World War: Czechoslovakia was born.

Life passed fairly uneventfully (apart from being forced by the allies to cede a large part of the country to Germany of course) until 1939, when Germany invaded and made the country a protectorate. There was a lively resistance movement during the war, which reached its peak in the assasination of the German governor Reinhard Heydrich; an event which had severe implications for the villagers of Lidice, which saw its entire male population killed in reprisal, and the rest of the population shipped to concentration camps.

Following "liberation" by Russia, Czechslovakia fell under their sphere of influence, becoming communist in 1945. Protests about this grew in frequency and size towards the end of the 1960's, but were brutally repressed over the course of the next two decades by way of a "normalisation" campaign.

In 1989, the Velvet Revolution took place. The spark was provided by the police when they brutally broke up a peaceful student demonstration, which led to several groups uniting to develop an organised movement - the word "Party" was intentionally avoided - campaigning for change and known as the Civic Forum. The Civic Forum quickly became very popular with the general population, and the communist party all but collapsed in on itself as a result, eventually leading to elections in 1990 - the first since 1946 - which boasted a stunning turnout of over 95%.

Whoever wrote the potted history of Prague needs to go back to school instead of putting garbage on the web. Prague did not become the capital of Czechoslovakia 'after the German invasion' (of 1939). It had been the capital since the creation of the Czechoslovak state in 1918. This state was broken up by the Germans into a nominally independent Slovakia (in reality a puppet state) and the so-called Protectorate of Bohemia and Moravia (the current Czech Republic). Prague remained the capital of this occupied territory. After liberation by the Russians in 1945 the newly restored Czechoslovakia did not immediately become a Communist state. That did not happen until 1948. The separation of the two constituent republic occurred in 1993 (the article doesn't make this clear)

Now I am in Prague and really see that it is a beautifully preserved city, rich in mystery, ghosts and legends. When I came here I enjoyed its historical monuments, castles and beautiful and diverse nature. The capital of Czech Republic is Prague, Praha (The name of the city in Czech) is known as the pearl of Europe for its beauty. And I like not only Prague, but the whole Czech Republic, I was traveling to the world famous spa town of Karlovy Vary, also known by its German name of Karlsbad (or Carlsbad in English) http://www.karlovyvary.cz/, I enjoyed International film festival there http://www.kviff.com/en/news/, it was a great experience for me. Karlovy Vary reminded me Prague with wealth of architectural forms, ranging from Romanesque and Gothic through Renaissance and Baroque to Art Nouveau, Cubism and Deconstructionist, co-exist in an unusual harmony, very beautiful and with less crowds of tourists except at the time of film festival when tourists leave Prague hotels http://www.prague-hotels.org.uk/ and go to Karlovy Vary. I also visited Kutna Hora and was really impressed by Bone Church http://www.kostnice.cz/. Can you imagine - 40,000 dead form morbidly fascinating sculptures and artwork; skeletons meticulously fashioned in 1870 by a wood carver. Prague is my favorite city in the whole world!

It is just a great city with a most marvellous history. If you haven't been there yet, just go!