Big Sister is Watching You...

We had thought reality TV couldn't sink any lower, couldn't get any sleazier... and we were wrong, of course. While shows such as "Big Brother" show humanity at its worst, with jealousy, pettiness, and rudeness being the norm, a new type of reality programming has popped up in Prague: Big Sister. However, don't expect this program to appear on network TV; in fact, in order to watch it, you have to pay 29.95 Euros a month. That's because the show takes place in the most unlikely of settings: a brothel. 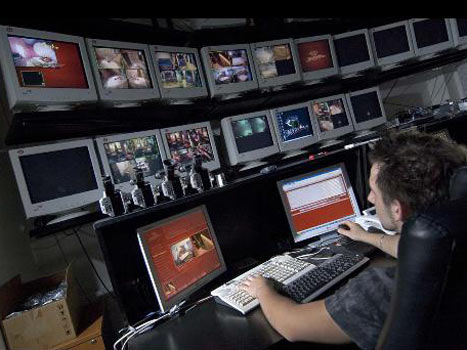 Above: The Big Sister control room, where the action is... watched.

Every room in the brothel has several cameras that are always on, and are constantly monitored by a central control room with dozens of monitors and technicians. In addition to the private rooms, which range in themes from heaven and hell to the igloo room that features a giant polar bear overlooking the bed, the club includes a strip show, pool and sauna - all under the watchful eyes of Big Sister and its online subscribers. Depending on the season, the brothel offers between 25 to 45 prostitutes, all of them free of charge - to those who sign the broadcast release forms, that is. Each night sees about a dozen "performers", while the website itself gets over 10,000 hits a day. Most of the women working for the brothel are from the Czech Republic and Slovakia, and make about four times the average Czech wage. All of this takes place in a renovated tenement building just outside of the Old Town. Thanks to the Czech Republic's liberal laws regarding things like sex and drugs, the brothel is able to legally exist in the city centre.

So, is it National Geographic for adults? A version of The Real World that's actually entertaining? You can always visit Big Sister yourself, for your own fifteen minutes (or less) of fame!

Dear sir: I shall visit Prague this June, 27-30. During this period, I would like to visit your Big Sister. Pls. Let me know your detail address. Thanks.

Dear sir: I shall visit Prague this June, 27-30. During this period, I would like to visit your Big Sister. Pls. Let me know your detail address. Thanks.

can sex without a condom

can someone tell me if this place is closed??

i loved this job

Is sex really free? I'm Asian And I can accept live my sex

Is there any club in Prague or CZ with a similar concept?

Is it still Open?

I truly appreciate this post. I ave been looking everywhere for this! Thank goodness I found it on Bing. You have made my day! Thank you again..

Does Big Sister is ok now and is it open?

K5 was the main club - BigSister is closed now

I went to K5 Relax Club in Prague a couple of weeks ago for my mate stag party! What a great place! No stress from the girls, till you ask to one of the manager to bring you the girl at your table! Under each table you will find a tablet with the info about the girls that are working that nigh!During all the time that we were drinking at the table always the pole was busy with one of the girls!Best Gentleman Club In Prague! See you very soon again!

Does this place still exist? I've read some conflicting info about wether or not it does. But if it does, I'm jumping on the first flight to Prague! Awesome concept anyway, there should be more places like this. @Jessica from USA. Check out their website darling, I dont know how the application and interview process goes, but ehrrrm, I'm sure it wouldnt be too hard to get a job there. Let me know, we'll go together. Or maybe I'll see you there. ;)

How do I get a job working there

Place is alright... No girls just full of gay aliens

Yeah. This place is no longer like this and the name has changed! Such a disappointment. I was looking forward to hanging out in the hot tub. That's a separate charge, after paying to get in. They still have girls swimming in the pool, sometimes. DO NOT WASTE YOUR TIME.

i can't find a contact to know about reservation and rules!

I've just learnt about this institution, today only.. Looks a very place to be in!!

The company of Beautiful Czech Ladies for free! What an excellent idea, having appeared in a soft-porn movie myself and having enjoyed the fun experience with like minded free-thinking people, I know what I'll be doing when I am next in Prague.

how did you make the reservation?

I made a reservation, I can't wait! I'm so excited.

who needs to get saved today in czechoslovakia?

Amazing idea, I wish this was on cable tv too

My only ambition now is save up to go to Prague. AND IM SINGLE. YES. YES. YES.

Absolute genius of an idea...win-win-win

It sounds like a great way to generate revenues. Perhaps Greece needs one such establishment, so it can get out of debt! :-)

Genius! What a great idea, it seems this is a good solution to poor but randy guys!

this is awesome! never heard of anything this wicked before. long live the creator of this big sister mates.

That is sick, dude !

Also I find sickening yet sweetly ironic that this place is called "big sister". The world is indeed becoming something darker and more twisted than Orwell or even Huxley could have ever fathomed.

Wow, what a bizarre experience! It isn't completely free, because you have to pay a small fee just to enter the club, but once you're in you really can choose any of the girls and do whatever you want - as long as you're willing to do it on camera! Brilliant concept, wish they'd bring it to UK

I would just like to point out Big Sister Media runs it's dedicated TV channel in United Kingdom and Ireland on Television X - Channel 3 . As well as it's original TV shows in Italy - Prima Fila Hot Club - SKY ITALIA.