Famous for their vodkas and superb beers, Poles are not shy when it comes to the odd tot or three. As a visitor to the city, the choice is mind-boggling. Just bear in mind that for every drinking hole you find at street level, there is probably another in the basement, and a club upstairs. Even the local franchise of a famous coffee shop chain offers spirit chasers! Once you're here, just remember that the Old Town district has more bars per square metre than anywhere else in the world, so don't expect to get very far on a pub crawl. For a fuller flavour of what to expect on a night out in Krakow, check out our nightlife section with updated info on weekly parties. On this page you'll find links to detailed and comprehensive information on over 200 places to drink in Krakow, but in addition we've included a short and cheeky list of the top 5 places to drink that we actually go to, so simply clink the link right here to read more. 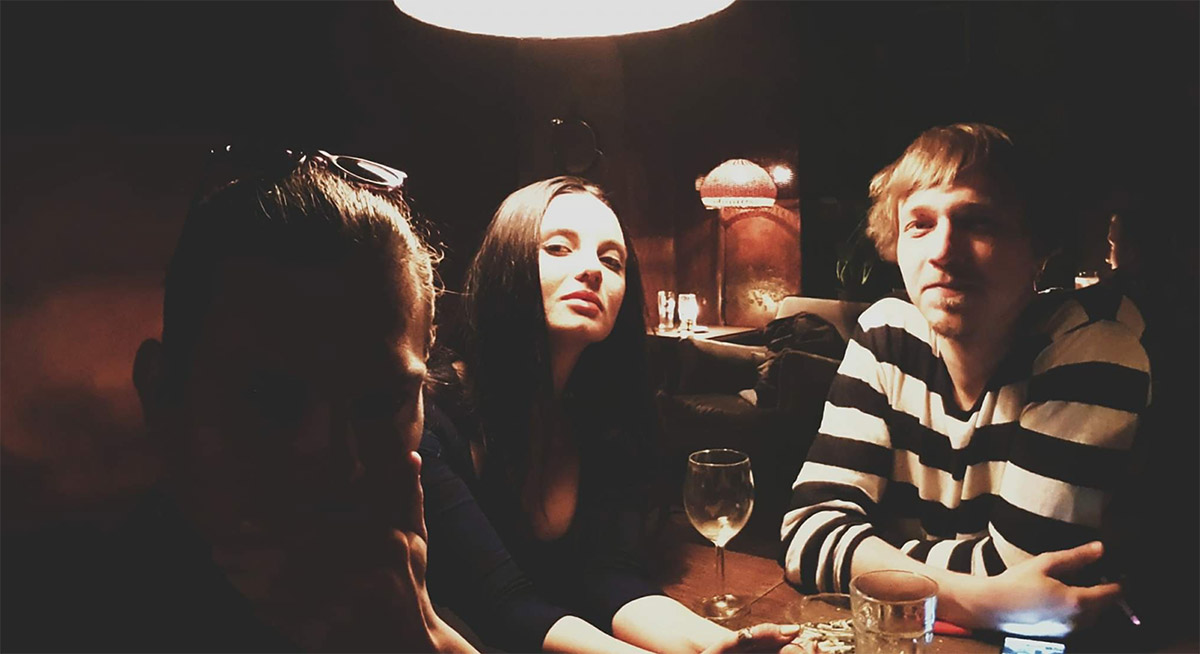 No self-respecting pub crawl in Krakow would fail to take in the city's Kazimierz district. A ten minute walk south of the Market Square, Kazimierz is the former Jewish quarter, and now the gritty and hip centre point for many of Krakow's best bars. The most famous are Singer and Alchemia, but you'll do hard to find better that Eszeweria, a perennial favourite with locals and less inundated with tourists than the former two. If this pub was in Budapest, it would doubtless be called a 'ruin bar- - the vibe is chairs and tables from the local flea market, scruffy recycled cupboards and plenty of old candle wax, amongst which you will find a lively and regular crowd and drinks that don't cost the earth. In the summer a small courtyard at the back opens out with additional tables, and provide another excellent hideaway to enjoy a cold beer away from the prying eyes of paparazzi who are doubtless looking for you. 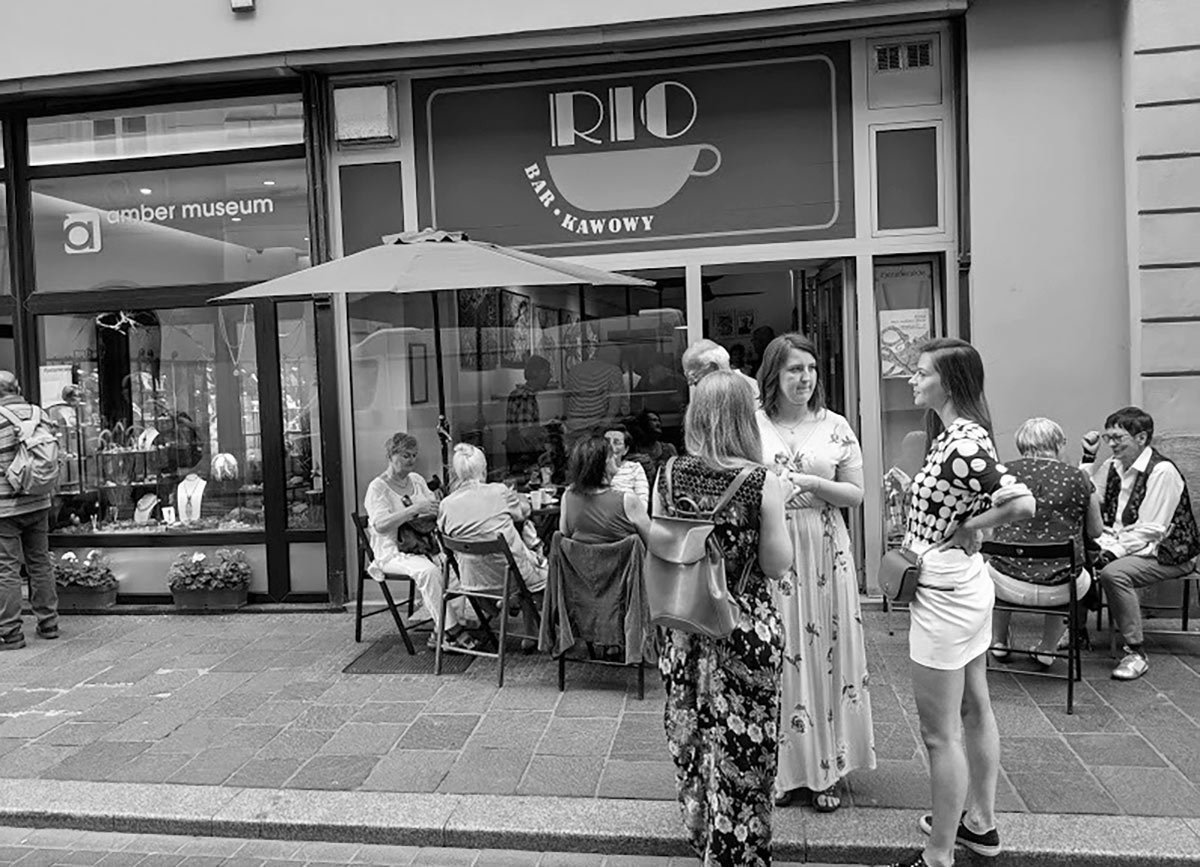 Drinking in Krakow doesn't just mean alcohol. Drink means cafes and cafes mean coffee. And while we can't all make it over to Brazil to enjoy the best, Krakow at least has its doppelgänger in the small, modest but cult Rio on Utica Jana. At first glance, Rio doesn't seem to have much to recommend it - uncomfortable-looking stools, a dearth of young people, and a constantly changing but reliably mediocre exhibition of art on the wall - but that's to miss the point. Rio is a Krakow landmark, a meeting place over the decades for distinguished artists and writers and nowadays a dying glimpse into how it was like to live in the city before the hordes of tourists descended. Oh, and they make probably the best coffee you'll find in Krakow. 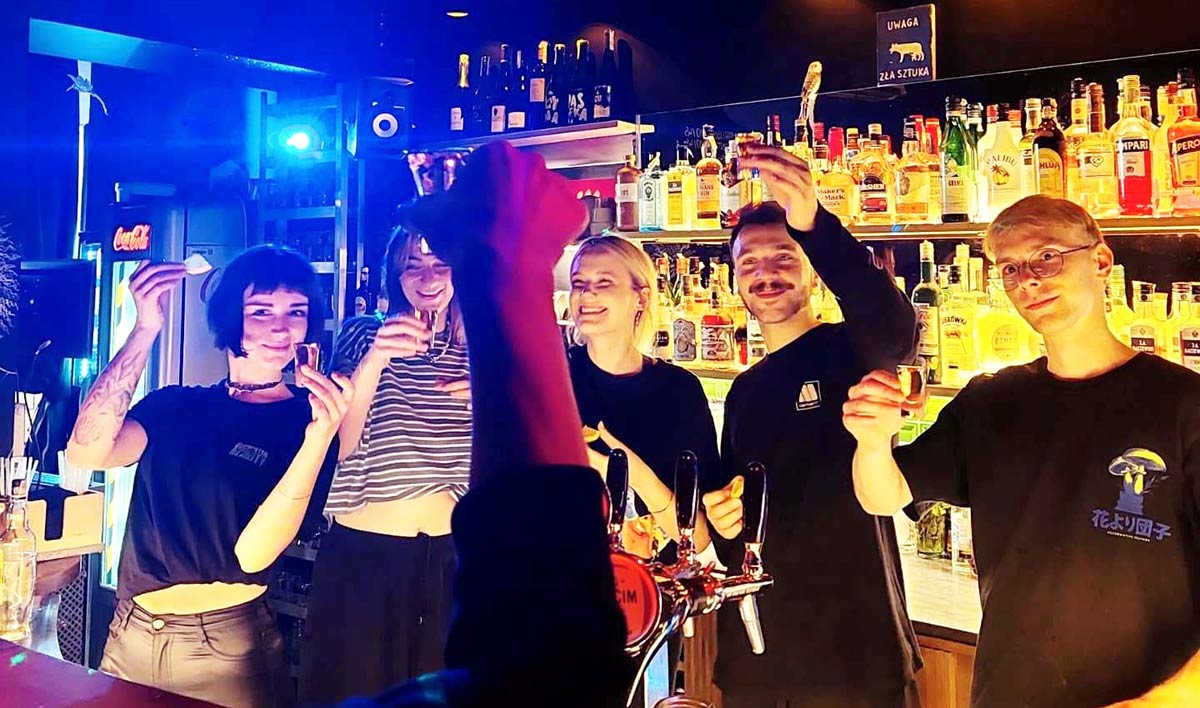 Hands-down Krakow's best know bar, Piękny Pies ('Beautiful Dog') has moved location several times in the last twenty years, but always managed to drag its hip, artsy clientele along with it, wherever fate has led it. Currently to be found on Plac Wolnica in the funky Kazimierz district, the club showcases live music, DJs, with a weekend tendency to offering its club-goers solid portions of electro, techno and acid. You may not get too many smiles from the bartenders, but you’re in the right place. 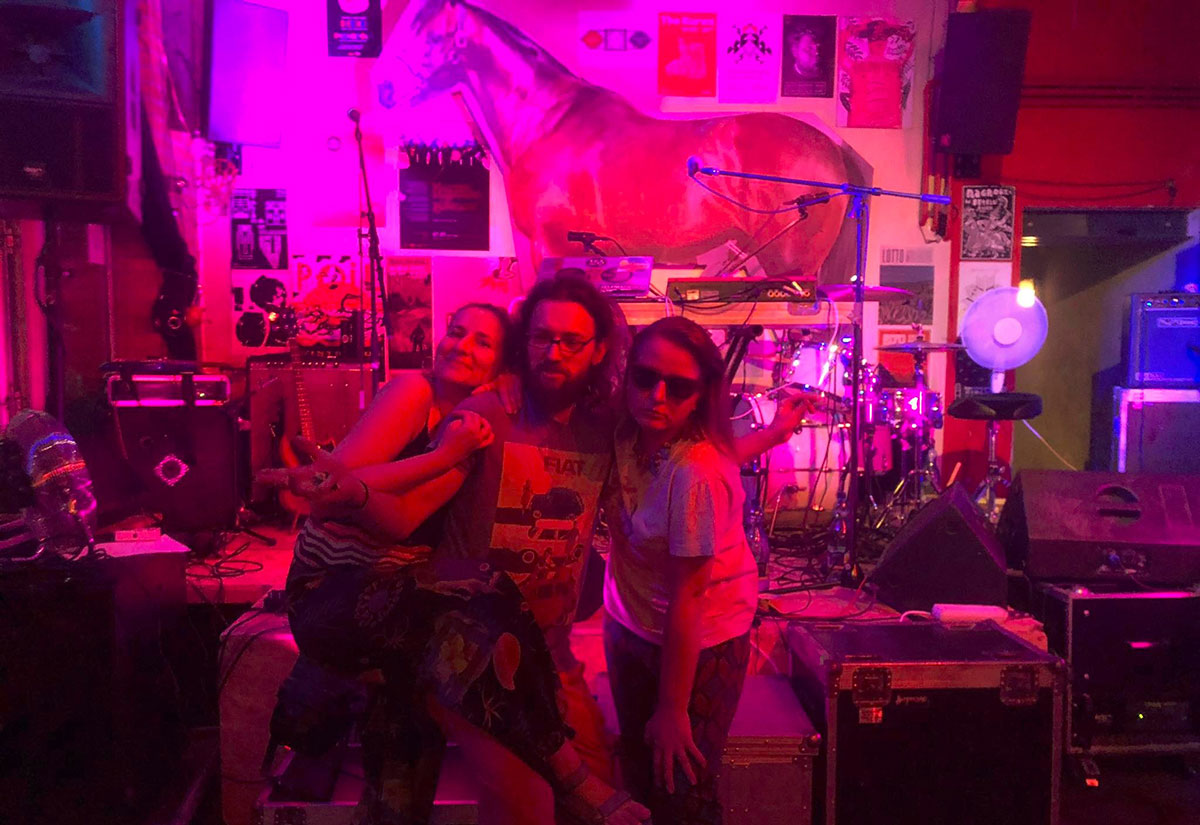 So good, we named our dog after it. Or rather, our daughter’s dog. Which we take care of. Often. Betel is one of those pubs / bars / clubs which defies classification. During the day, a rather scruffy, small, but perfectly-located-for-students cafe, which transforms as the day wears on into an exhibition space / concert hall / riotous party venue. So you'll never be quite sure what version of Betel you'll get, which is the essence of its appeal. Just walk smugly past the lines of tourists queueing outside the neighbouring Charlotte for their overpriced oat-milk lattes and croissants, and slip into Betel for better coffee, better people, and better times. And if while there you bump into a friendly dog that looks like a small Alsatian, you finally get your once-in-a-lifetime chance to just say hello to Betel in Betel. 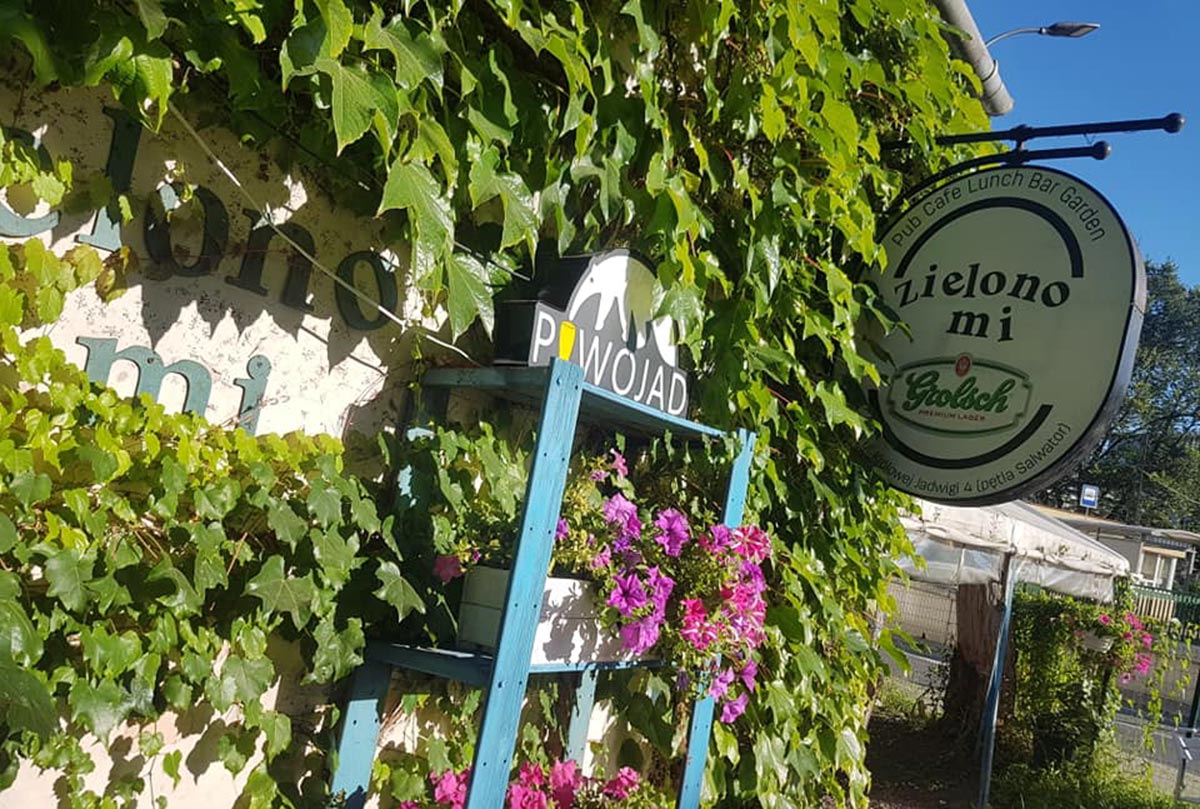 Will you accept this challenge? The challenge involves leaving the comfort of the Old Town, taking a tram (normally number 1 or 2) all the way to Salwator, and then one further stop after that, where the tramway does a tight circle and stops before heading back. At this point, jump out of said tram, amble over the zebra crossing to the small house covered in ivy, and you have arrived at Zielono Mi. You have now officially left the tourist centre of Krakow behind, and entered the local's pub. Congratulations. Now, depending on your mood, order a glass of wine, a craft beer, or a round of vodka shots. And repeat. Various people will enter and depart your field of vision, and before long you'll have made friends with the locals and feel like moving to Krakow permanently. At this point, all you require is the approval of the bar owner. If she appears with her (thankfully decommissioned) AK-47 and threatens you, asking you to leave because of your rowdy behaviour, it's official. You have passed the test and been approved. You may now leave your current home country and apply for residency in Krakow.

Our top 5 will obviously not be to everyone's liking. If you're a beer afficionado, You might find this list of top ten craft beer places in Krakow to be more useful.

Reviews about Krakow Bars and Pubs

ZERO STARS Friend was drugged given free shots of vodka. Taken to a room and €800 taken from his bank account. Scum of the earth at this place avoid at all costs literally!!!

I managed to delete the Google Maps accounts of a lot of the VIP Strip scam Clubs in Poland as well as Spain as they are so stupid mobsters :)))) Just report the retards as they use same accounts to give between themselfs 5 stars. Next will bomb their place with stinky bombs and I will start with Wild Orchid in Gdansk and Level Up in Krakow. Will have a knife and pepper spray in case the retard bouncers fight back.

Completely different from the normal Krakow pub - this one is haunted mainly by locals rather than tourists, and is quite a lot of fun!

I think there are a few better places in Kazimierz now - like Eszeweria for example, and this place seems to have a few more tourists than the others, but overall pretty good!

One of the few places with a dart board. Electric one, unfortunately, not a proper bristle one, but still....

One of the oldies in Kazimierz, and still one of the best!

Awesome place. My favourite in Krakow!

I was drugged and robbed in January 2017. I cannot believe they are still running. Please do not visit this place. I'm going to get in touch with the embassy as it's totally unacceptable.

Watch out, they fill in another amount of money if you don't look. Pretty sure they put something in my drink. DONT GO HERE!!