The Old Town is where most visitors will begin their tour of the city, and where many of the key landmarks are to be found. Since 1989, it has undergone a major transformation, and the place is now really getting into its stride. Cafes, restaurants and shops are flourishing, whilst the black soot that cloaked much of the city has been painstakingly removed.

The dramatic arrival of democracy and a Free Market culture has, of course, been no bed of roses, but one cannot help feeling a sense of admiration at how the Cracovians have responded to the changes. The city's age-old character has not been lost. Rather, it has been given a new lease on life. 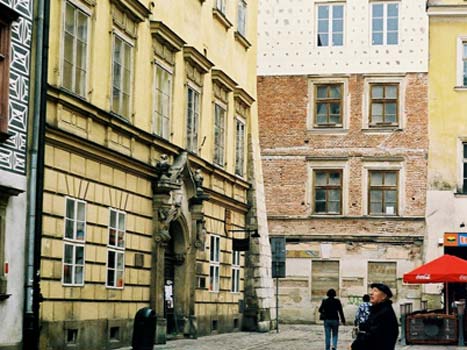 Orientation in the Old Town is straight forward enough. It was once ringed by a great wall, and a fragment of this still survives. Where its turrets once rose up, one now finds the Planty Gardens, which form an enchanting threshold to the city. The district has preserved its medieval layout, which, unusually, followed a grid pattern. This, combined with its relative compactness, means that it is difficult to get lost here. And besides, the principal streets all lead to the expansive Rynek, or Market Square. So once you have crossed the Planty, it is not a bad idea to forget about maps for an hour or two, and discover the city as it unfolds before you.

Me and some mates are going to Krakow in 2 weeks time, any people know good pubs/clubs to go to? feel Always free to contact me :) email adress below

I was recenlty lucky enough to travel to krakow with school, where we went to see all the old world war two attractions such as auschwitz. I was amazed when we were able to have free time to rome the main center of krakow, it captivated me with all the old building and the european feel to the place. I highly recommend going to castor coffee club on the main square as they serve the very best coffee i have ever tasted, and that is no exaggeration. At the moment as i am only 15 i have many exams coming up, but in my cap year i am hoping to spend this time in the city i love krakow.

My wife and I have been to Krakow for the last 3 new years.This is a lovely city with very friendly and polite people. Not to be missed!!!!!!!!

First time a few years ago I managed to take my 1st Overseas trip and was lucky to spend 3 days in this amazing parting of the world. I cannot wait to come back there and bring my family.

Krakow is the land of art

Nice site. My Grandmother was born in Krakow. Her parents sent her to American at the age of 10 alone. I have family here. I would like to know if there is a site where I can speak to a person who is in Krackow to chat who is respectible. Any help would be appreciated. I hope to come to Krakow in the near future and it would be nice to find family. Thank You so much

Krakow is truly beautiful and has a lovely atmosphere.Will definitely come back

Have been in many historical citys, but Krakow is definately the best one. Very friendly people and lovely places with a lot of charm. Will be back soon.

Cracow has to be one the most wonderful cities in the world (and I've been around) Great bars and restaurants and friendly people. I just hope it doesn't go the way of Prague and end up with dozens of pissed English kids on stag nights

going to krakow again for the 3rd time this new year,cant think of going anywhere else,counting the days..PARTY ON!!!!!

Such a magical Old Town. We loved Cracow on our tour of Europe.

Thank God this city was not destroyed in the Second World War - the Old Town especially is an absolute gem.

Nice site! I might study in Krakow and having visited a few times I appreciate learning a few new things.

Why can't we get a hotel quote without giving ex-directory phone numbers etc?

While we don't have the possibility of having our own currency conversion yet, we recommend XE's currency converter, which has Polish Zloty: http://www.xe.com/ucc/

It would be useful to have a currency exchange facility on thew site.