Kiev (known as Kyiv, in the official state language of Ukrainian) started life in the 5th Century AD as a trading post of the Eastern Slavs, an ethnic group that would evolve into the Russian, Ukrainian and Belarussian people. The city grew in prominence until it became the dominant political power in a state known as 'Kievan Rus', which existed from the late 9th Century until the 13th Century.

This period is known as the Golden Age of Kiev and indeed the city was instrumental in the development of the Slavic people's identity in this part of the world. In 988 Prince Vladimir the Great chose Orthodox Christianity as the state religion, arranging the mass baptism of his people in the Dnieper river. His son, Yaroslav the Wise built St. Sophia's Cathedral a replica of St. Sophia Hagia in Constantinople, promulgated the first East Slavic code of law, and is thought to have established the region's first schooling system. Indeed, Kievan Rus' was one of the most advanced states of the day and at that time Kiev's population was considerably larger than London's and its culture considerably more advanced.

After the dissolving of the Kievan Rus, Kiev's influence and fortunes diminished and the city remained a marginal power until Soviet times. Lithuanians, Poles and Russians took turns in subjugating the city, granting it various degrees of autonomy but never allowing its influence to grow to that of its golden age. The city began to prosper again during the industrial evolution of the Russian Empire in the 19th Century but despite declaring itself as the capital of an independent Ukraine in 1917, Kiev passed under Bolshevik control in the battles that took place after the Russian revolution. Kharkiv was made the capital of the Ukrainian SSR.

In 1934, having growing in influence, Kiev was made capital. However, the following years were not a pleasant chapter in Kiev's history. Stalin was on the rampage and mass executions of intellectuals, nationalists and anyone seen as a political threat were common.

World War II was a yet more painful episode for the city. A bloody battle was fought in defense of the city, which the Germans won comprehensively. An evacuation was made however and Kiev was booby-trapped with ten thousand mines by retreating forces. Detonated by remote control the bombs levelled the city, killing a thousand German soldiers and many more Ukrainian civilians. Kiev burnt for five days.

After the war Kiev grew further in influence, and although freedom of speech and political freedoms were suppressed by Moscow, the city enjoyed a powerful status as one of the three most important cities of the USSR (after Moscow and Leningrad, or St. Petersburg as it is now known).

Whilst the fall of the Soviet Union in 1991 was greeted with great joy by the citizens of Kiev and Ukraine in general, it brought few immediate benefits to the city. The early 90s were marked with vast inflation and huge unemployment.

In 2004 the events of the Orange Revolution were played out in Kiev before the eyes of the world - however the new hope and optimism of this new start which saw Victor Yushchenko voted as Ukrainian president have since faded and political instability and corruption remain a problem.

There are causes for optimism however. Kiev will play a leading role in hosting the Euro 2012 Football Championships and Ukraine is aiming for EU membership by the year 2015. Meanwhile in recent years the capital has seen a vast increase in the number of Western quality restaurants and nightclubs, and is considered a centre of fashion, culture and the arts. 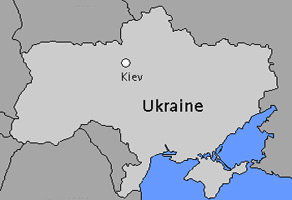 The concept of Ukraine as a country was born from the state of Kievan Rus, a powerful state that ruled much of the territory that is modern Ukraine during the 9th to 13th Centuries. The Ukrainian language evolved from the Old East Slavonic language that was spoken during the time of Kievan Rus. The first documented use of the word Ukraine dates back to 1187, and the Ukrainian people maintained a strong sense of national identity through centuries of foreign rulership and occupation, during which time Ukrainian nationalists made several bids for independence - some successful, but all short-lived.

Modern day Ukraine was established in 1991, when the USSR dissolved and Ukraine declared itself an independent state. It still bears many scars from its time under Soviet rule, when the country endured two of its biggest tragedies: Holomodor, the great famine of 1932-33, which was brought on by Stalin's agricultural policies and saw the death of an estimated three to five million people; and the Chernobyl Disaster, the explosion of a nuclear power plant in Chernobyl.

Today Ukraine is still struggling to come to terms with a market economy, although consistent economic growth in the new millennium (after a decade of decline in the 1990s) bodes well. Ukraine's future depends greatly on its traditionally close ties with Russia, which it relies on for energy. However, Russian and Ukrainian relations are not as close as they once were with the Kremlin even shutting off gas supplies in January of 2006.

Partly because of souring relationships with Moscow, Ukraine has been looking West for trading partners and influences. It recently won the hosting rights to Euro 2012 Football Championships in a joint bid with Poland and is hoping to join the EU by 2015.

Some of this stuff is not true

I have never visited the Ukraine. Why do you say "some of this stuff is not true", I am interested in knowing what is not true. Thank you.