Yes, against all the odds, Poland and Ukraine will be hosting the European Football Championships in 2012! Their joint bid was announced successful by UEFA chief Michel Platini in Cardiff on 18th April 2007, winning out over more favoured bids by Italy and Croatia/Hungary - and causing widespread jubilation throughout the two Eastern Europe countries.

The action will be spread over six cities in Poland: Warsaw, Gdansk, Poznan, Wroclaw, Chorzow and Krakow; and four cities in Ukraine: Kiev, Lviv, Dnipropetrovsk and Donetsk. Kiev's Olympic Stadium, which hosted the football at the 1980 Moscow Olympics, is the proposed venue for the final. 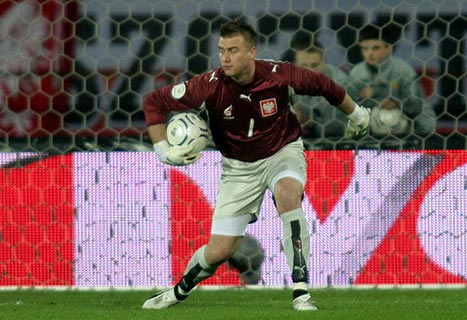 Winning Euro 2012 will result in a great deal of construction investments and enormous financial benefits to both Poland and the Ukraine, with some analysts putting the figures as high as 3 billion US Dollars worth of revenue. The tournament will also help shift the balance of power in football, and bring in resources and prestige to help boost the games of East European countries which have traditionally made little mark in international competitions. Euro 2012 will be the first major footballing event held by a country behind, or formerly behind, the Iron Curtain since Yugoslavia hosted the European Football Championships in 1976. It will be the first major sporting event of any kind hosted by an East European country since Moscow Olympics 1980.

Great news then for this part of the world, and a fantastic chance for Poland and Ukraine to show the world what they're capable of, both in terms of organising the event and competing in it! Of course, we'll keep you in the know with all the latest Euro 2012 news, fixtures and results - and, if you're coming to Warsaw to watch a match, we'll give you the low down on accommodation for booking hotels and apartments, give you travel information and details on getting to and from the airport, plus provide you with a very handy map for tracking down those stadiums. Oh, and we might have a few titbits on pubs, bars and nightlife you might want to read up on!

If however you are travelling to Euro 2012 for matches in other Polish or Ukrainian cities be sure to call on our friends in Gdansk, Poznan, Wroclaw, Krakow, Kiev and Lviv for the most complete guides to the action and the cities.

If you can't wait for 2012 however then check out all the latest news and views on Euro 2008 in Austria, courtesy of our colleagues in Vienna. See you at the game!

portugal or spain may win this euro cup. football rocks

this time its for spain again its belong to them

I HOPE PORTUGAL WILL WIN THE EURO

German is going to won this time.

France and Holland in final.

Hello, I think the Euro of 2012 in Poland will host this time the World cup of football winners and them challengers of the title of the new winners of the Euro 2012 in Poland. Many Thanks.

c.ronaldo but giving support to netherland. because only one best player can not make the every game winnnnnnnn

really england stand no chance at all they will come 3rd germany 2nd and spain 1st get real guys...

common guys, of course the final four will be : Spain, Holland, Germany and Portugal, England will not qualify, neither will Scottland, ireland, croatia etc.Get real, dudes!!!

countries like Spain,Germany,England are the countries thats are going to perform very well in this coming EURO 2012

animals are being burned alive for this friggin joke of sissies playing 'football' c'mon.

"THE FACT IS SPANISH TEAM IS THE GREATEST TEAM EVER PLAYED IN THIS WORLD,Torres,INIESTA,XAVI,PEDRO,VILLA"

THE FACT IS SPANISH TEAM IS THE GREATEST TEAM EVER PLAYED IN THIS WORLD,INIESTA,XAVI,PEDRO,VILLA HMMM....,INCREDIBLE.

'I AM WAITING FOR GERMANY,I LIKE TO WATCH THIER GAME PLAN.

Germany will be champion in 2012

i think england are going to win the whole thing well i dont think they are i know they are come on england!!!!!!!!!!!!!!

Polska is the number 1 football. Country in the world. Polska gora

Polska will defeat the west Polish called German in the final!

boys and girls u can't forget Portugal to win...everybody know they are contenders....

Germany gonna grab the title surely this time and Spain also has a fair bit of chance.Dream final(GERMANY V SPAIN)

Germany can play well and win the Euro 2012,where as Spain are the second best.

who can tell me, is better buying a ticket to matches and then booking a plane and hotel by myself or throung travel agency?

3.Hi there! Guys, I found a cool tour to Ukraine on euro 2012. Its especially the best way for funs who are going to Donetsk matches. First we arrive to Dnepropetrovsk where we will be given a transfer (airport-hotel, hotel-match, match  hotel, hotel-airport), a ticket to match and accommodation. Tour has the advantage of cheapness as compared with Donetsk prices. I can share details. Mail me ...

Thank god IRELAND wont be cheated out of it again by the french. can any one tell me were IRELAND'S games will be played when they get true????

What are the actual dates of the championships

What are the actual dates of the championships

Hi All, I can sell a several tickets for Euro 2012. For more details please contact with me by mail: euro.poland1@gmail.com Best regards, Mariusz W.

germany gonna make it this time i am dam sure

I have a great feeling that this Euro cup will be way better than the American cup. I believe that this time England will prove people wrong.

Poland is one of the most successful footballing Nation. They were 3rd in the World in 1982 & 1974! If they find the same spirit they will amaze once again!

Poland is going to put on a GREAT party! Be there!

Reply Jun 20th, 2011
i am number six
Bosnia And Herzegovina

I think Euro 2012 Croatia time, which has incorporated a harmonious team. There are plenty of quality players who have important positions in their clubs and some of its engine of teams and clubs. Luka Modric Tottenham (each attack goes through him and think he's 50% of the Tottenham team), then Da Silva Brazilian with a Croatian passport, which at one time played in the arsenal that I think is now in the Shakhtar Donetsk 'fiery forward, "mostly I want to say that some teams are strong in attack some in the defense Croatia simply has the quality to any place without a strong domestic league, most players play in big European clubs, but when play for the national team can beat anyone just unified and coordinated team that is consistently among the 10 teams of the world.

I WONDER WHICH GROUP THE HOME TEAM WILL BE PLACE. CAN SOMEBODY LIST THEM

Wow England have an easy group again, they always do qualify for the knock-out stages and then out they go, it's a pity that they get rubbish after the group stages, would be interesting if they somehow managed to get into the final.

Maybe you will find some interesting facts why Ukraine has been chosen as a host and next time will be more objective in your comments.

The euro 2012 will be brilliant. Pity the final is in Kiev.

Poland has got exactly the same sort of football fans as any other countries...lets avoid stereotyping...so sad

England, yes will end up 2nd...IF they get really lucky

I believe for Euro 2012 my country Albania will be number two in grup D.Together with France. I hope and I wating

I believe for Euro 2012 my country Albania will be number two in grup D.Together with France. I hope and I wating

scotland have the hardest group in these tournments but still we will win the group with domanet force! spain will be a challenge but im cofadent we will beat them. c'mon sctoland

did england get to pick the group opponents again

Poland and Ukraine as hosts automatically qualify for the finals - so they are not included in this preliminary draw for qualifying groups.

The european championship will a great boost for tourism and economy in Poland and Ukraine. It´s very smart of Poland and Ukraine to join forces and do it together. In fact I will try to get there and see the countries that gave birth to Henryk Sienkewicz(Potop) and Mazepa(cosackleader). Greetings from Sweden

we're not brazil we're northern ireland we will top our group

are poland & ukraine automatically in the finals?

I really hope England get Poland in the same group during the draw today!

PAFC and England Fans are on there way...Hopefully.

Dear Piotr if you can't speak english, do not write please, becouse they would laugh at you.

Hi! I think that it is realy a good opportunity for both countries. In the preparation of the championchip Ukraine is the same as Poland, at least you can go to Wikipedia and see the results, you will find the real photos of the ukrainian stadiums and only the project images of the poland stadiums... So Ukraine is weldone. And we welcome all the visitors in 2012 in Ukraine.

First class information. It's why I'm giving 1/5. If only there was information WHEN (day/month) I would give 2/5.

EURO CUP IS SOO SICK but dont diss the americas !! ARGENTINA URUGUAY BRAZIL MEXICO COSTA RICA some of the best teams in the world im rooting for england france or spain!

Polish preparation to the euro in 2012 is good but Ukraine has significant delays. I hope Ukraine will contiune to organized with Poland

I think Euro2012 in Poland and Ukraine was very good idea. I'm sure that it will be succes for bouth countrys, maybe not in football but in economy. I think that they must beter promote east Poland and Ukraine, not only citys where will be maches. All region of Lublin for example. Lovely.

Damn house is 3 hours away from kiev and 4 hours from odessa. I am for sure going to euro 2012

I thank God that Euro 2012 come to poland and ukraine that is amazing for foreigner to have a look into a new world, new life and new developed cities... to my view ukraine is qualified country to become EU member before the games.

Will Lublin have an international airport by 2012?

anyone knows which campany will produce the opening and the closing ceremony??

At least Poland will get an automatic qualification to the finals!

i think having euro 2012 in Poland is great

so where will the Euro 2012 final be? in Poland or Ukraine? Kiev or Warsaw?

Do marka! jestes totalym pesymista i tacu jak Ty niszcza nasz wlasny kraj, Im really sad for Mrek who said that we are not preaper to do the euro2012 , well, anyway that your opinion I hope that is not true

Why not any other country because what time would i have to make available to watch the ENGLAND matches? Oh well England will bring the trophy home {Hopefully}under Fabio /capello!!!!!!!!!!