In the sweltering heat of an August afternoon in 1942, during the Nazi Occupation of the Kiev, two crack football teams stood off against each other in Zenit Stadium. One was an elite force of German Luftwaffe pilots, named Flakelf, considered all but invincible by the German officers commanding the city. The other was FC Start, a team cobbled together of malnourished Dynamo Kiev players who had found work at a bakery during the occupation.

The match had been much hyped in the media and posters had been spread around the city. News of the previous match between the two sides had been suppressed after FC Start thrashed the Germans 5-1. This time however there was to be no such humiliation for the 'master race'. Before the game an SS Officer entered unannounced and addressed the team in perfect Russian.

"I am the referee of today's game. I know you are a very good team. Please follow the rules, do not break any of the rules, and before the game, greet your opponents in our fashion."

The subtext of course was that not only were the FC Start players expected to give the Nazi salute at the beginning of the game, but they would also be very wise to lose the match. 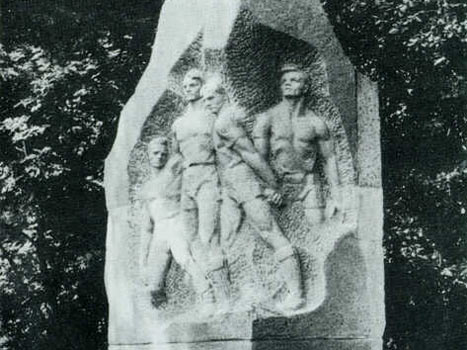 With the excited crowd watching, the two teams exchanged greetings, Flakelf crying 'Heil Hitler' to shouts of German approval. However, as the FC Start players raised their hands aloft instead of giving the expected salute they brought their hands back to the chests and shouted the Soviet slogan, "FizcultHura!", or Physical Culture Hooray! To the Germans' dismay the Ukrainian spectators cheered their rejection of the Nazi slogan.

As soon as the whistle blew the Flakelf team tore into their opponents with tackles and physical challenges bearing scant regard for the ball, whilst the Nazi referee exhibited an almost Wenger-like ability not to see the incidents. With the FC Start goalkeeper seeing stars, Flakelf netted their first goal. Start rallied however. Riding the challenges they pushed forward. When the referee was finally forced to award a free kick to the baker boys, Kuzmenko scored a stunning set piece. Next Goncharenko, a talented winger, took on the entire Flakelf defense before tapping in a second. A third followed and the team retired at the interval 3-1 up, with the Ukrainians in the crowd rapt with jubilation.

On this occassion FC Start had two unwanted visitors in their dressing room. The first was Shvetsov, a Nazi collaborator, who advised them to throw in the match if they knew what was good for them. The second, another SS Officer, was more clear in his menace. He warned them of the severe consequences that would occur if they were to win.

However the FC Start players were not to be bowed. Intimidated by the rowdy Ukrainian fans the German team were reluctant to keep up their physical war of attrition and with both teams scoring twice the result stayed the same at the end of the ninety minutes. In the dying minutes though defender Klimenko found time to add insult to victory when, after dribbling round the defence and the keeper, with the goal at his mercy he booted the ball back up the field. The Nazi humiliation was complete. The Aryan 'master race' had been comprehensively beaten by Ukrainian 'sub humans'.

Nazi revenge was not immediate, as various Soviet propaganda stories exposed (some versions of the story claiming that all eleven were immediately marched to Babi Yar ravine and shot in their football shirts). However on August 16th, following another league match, the Gestapo turned up at the bakery where the team worked with a list of players. Each named player at the bakery was arrested and driven to the secret police HQ in Korolenko Street, where they were interrogated under torture in the hope that they would confess to being criminals or saboteurs. None of them cracked. However Nikolai Korotkykh, was exposed as a former NKVD officer by his sister and died under torture. He became the first victim of the 'Match of Death'.

The remaining ten players were sent to the labour camp at Siretz, where they worked in appalling and torturous conditions. When partisans attacked the Germans in 1943, the camp commander gave the order to kill every third prisoner in retribution. Kuzmenko, scorer of the free kick, Trusevich, the charismatic goalkeeper and team captain and Klimenko, the defender who chose not to score, were all shot and bundled into the Babi Yar ravine. Three other players Goncharenko, Tyutchev and Sviridovsky, were posted to do forced labour in the city. Hearing the news about their teammates they were forced to act and managed to escape their bonds and hide in the city until the Red Army liberated it from the Nazis. The fates of the other players are unknown.

After the Soviets retook Kiev in 1943 talk of the mighty FC Start and their victories against various Nazi opposition - culminating in the match on the 9th August against Falkelf - were suppressed. Playing football with the Germans in a league was as good as being a Nazi collaborator in Soviet eyes, and so far from being heroes, surviving players lived in fear of persecution.

Later however, after Stalin had died, the story was allowed to surface and the Game of Death became a common legend to espouse Soviet heroism in the face of Nazi fascists. Of course in this version, the players actions directly resulted in their deaths which otherwise would have been averted. However, speaking after the collapse of the Soviet Union, Goncharenko the winger gave his opinion on the magnitude of the four players who forfeited their lives.

"A desperate fight for survival started which ended badly for four players. Unfortunately they did not die because they were great footballers, or great Dynamo players... They died like many other Soviet people because the two totalitarian systems were fighting each other, and they were destined to become victims of that grand scale massacre. The death of the Dynamo players is not so very different from many other deaths."

With so many unnecessary and tragic deaths perpetrated during the horrors of WW2, especially on the Eastern front, it's worth keeping this story in perspective. However, thanks to its romantic appeal it is always destined to be told as a great legend of eleven mens' defiance against their brutal occupiers.

The romance was certainly not lost on Hollywood, who retold the story with Allied prisoners of war replacing Ukrainian captives, in a movie called Victory. This cheesy propaganda flick stars Michael Caine and Sly Stallone with cameos from Bobby Moore and Pele.

For some more up to date, and hopefully considerably less dangerous football antics, check out the latest on Euro 2012 in Ukraine.

This is so radical...

this helped me with a project i needed to do.

It is a remarkable story and is told in more detail in this short film made during the euro 2012 football tournament... http://www.bbc.co.uk/sport/0/football/18602961

great article. There's a cool movie in the works about this story: http://www.kickstarter.com/projects/2082677268/playing-the-game

Incredible story! Amazing movie being made about this! http://www.kickstarter.com/projects/2082677268/playing-the-game

My mother told me this story when I was a little girl.

This is definately the victory of evil against the evilss

i salute the ukrainian team fr choosing death over cowardly.

Tribute to all the Kiev Players who accepted death against win.

Although most of this article seems to follow the established "facts", it is not true that the German football team was made up of elite pilots, or pilots of any kind, for that matter. As their name suggests, they were ground personell. They were certainly not a "crack" football team either. However, legends are legends...

I want to cite this article for a reseach paper. I am wondering what the correct citation should be, or at least, the name of the author of this article. Thank you, Ali