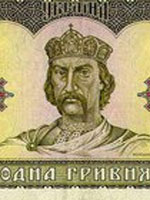 Credit cards are not as widely used in Ukraine as in Western Europe and America for example. You won't have any problems paying for your five star hotel (Visa, Mastercard and Eurocard are the most commonly accepted names) but if you're shopping for souvenirs or paying for a bowl of borsch you will need some cold hard cash. Credit card fraud is also a major problem in Kiev, so if that small retailer seems a little too keen to accept your flexible friend you might not want to hand over the little fella...

Since 1996 the hryvnia has been the official currency of Ukraine, which is also known as the hrivna (and confusingly pronounced 'grivna'), and abbreviated as either UAH or Hr. The hryvnia is available in banknotes ranging in value from one to two hundred, each sporting a patriotic portrait of national hero with ridiculous facial hair. A pound will buy you around 10 hryvnias (sometimes pluralised as hryvni), a Euro 7 and a US Dollar 5. Once you've split your bills you'll be dealing with kopiyka - there are one hundred to each hryvnia.

ATMs provide the clued-up traveller the best access to their money. Unlike with carrying wads of cash around there's no risk of suddenly losing your fortune to a pickpocket, and there's no wasting whole afternoons at banks as with cashing traveller cheques. Thankfully Kiev has just as many ATMs as the next European capital, although you may have to try a couple before you find one that likes your card. Bearing this in mind it's worth having a little safety money in reserve in case you're left short for an afternoon or so.

Travellers cheques are generally considered redundant by savvy tourists these days, who prefer the security and convenience of carrying their bank cards in their wallet instead. If you are accustomed to bringing travellers cheques with you abroad then now is definitely the time to get out of the dark ages - unless you want to rest your last hope of getting your cash with a bemused and monolingual bank clerk.

There are thousands of places to change your money in Kiev, however most only exchange Russian Roubles, US Dollars or Euros. A small bureau exists under Independence Square which will swap over most major currencies you're likely to have on you. Most places offer fair rate exchanges, with the more suspicious looking holes in the wall often your best option. Just be sure they press the right buttons on the calculator!

This page was very useful!