As of autumn 2005 citizens of the following countries can now visit Ukraine without a visa on short-term tourist, business or private travel of up to…

Above: Train it in to Kiev's magnificent station Left: Or else commandeer an old military plane Below: Then again, why not hire a flash car?

Above: Good luck deciphering one of these... Left: This mini-bus has been converted into an ambulance Below: ...going nowhere? Get there…

Credit cards are not as widely used in Ukraine as in Western Europe and America for example. You won't have any problems paying for your five star…

Russian is actually the language you'll hear most when you wander the streets of Kiev, and it seems Ukrainian nationalism doesn't stretch so far as…

Kiev (known as Kyiv, in the official state language of Ukrainian) started life in the 5th Century AD as a trading post of the Eastern Slavs, an… 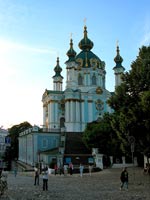 Above: The outside of St. Andrew's Below: The inside of St. Volodymyr's 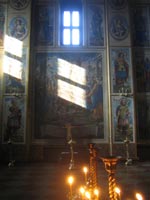 Kiev (Kyiv) is a city of changing faces and fortunes. Once the leading light of the mighty Kievan Rus' and cradle of Slavonic civilisation, it has since been sacked by the Mongols, ruled by the Poles and Lithuanians, then by the Tsars, detonated by the Red Army and occupied by the Nazis before growing strong again as the third most important city in the USSR. The classical influenced Soviet architecture of Independence Square and Kreschatyk are as much a part of Kiev's legacy as the Pechersk Lavra (Caves Monastery) and the golden domes of the many orthodox cathedrals, which once earned Kiev the cognomen of a 'Second Jerusalem'. After a decade of decline as the head of a newly independent Ukrainian state, Kiev is finally beginning to reap the rewards of a market economy and sparkling new monuments and malls are adding a new aesthetic to the city.

A fine place to begin any exploration of dynamic Kiev is on its main thoroughfare, Kreschatyk street. Closed to traffic during the weekends, this grand boulevard recalls Kiev's grandeur under Communism, as it is flanked on either side with splendid Soviet edifices, such as the Post Office and National Philharmonic Hall. It runs from the Bessarabsky Market towards the city's epicentre, Independence Square. Here, where the events of the Orange Revolution unfolded, you'll find one of Europe's most arresting plazas, with its commanding vista of the Globus Shopping Centre and the Hotel Ukraina.

If Kreschatyk Street and Independence Square represent Kiev's modern, commercial heart, then Pechersk Lavra and St. Sophia's Cathedral represent its ancient, spiritual soul. The former is a vast complex of sacred buildings, built around the famous caves monastery, the latter is the founding church of Orthodox Christianity in this part of the world. Both are essential attractions, for all but the most debauched stag party.

Once you've taken in all of the above make time for a trip to the picturesque cobbles of St. Andrew's Descent. This sacred spot is marked by the resplendent St. Andrew's Cathedral and is notable for being the former residence of Mikhail Bulgakov. It is also the quickest way to descend into Podil, Kiev's downtown region where you'll discover a curious mix of riverside restaurants, factories and churches.

More than most capital cities Kiev also offers the visitor a chance to admire a great deal of natural beauty. A long tract of forested hills rises above the Western bank of the river Dnipro, whilst islands like Trukhanov and Hydropark offer plenty of leisure opportunities from strolling amongst flowers and trees to lounging on sandy beaches.

Guide me UA Karen: Amazing tour with Olga! Highly recommend this company - prompt responses, cool guide, good service. D.Fleur Elva: I read this article fully concerning the difference of newest and previous technologies, it's amazing article. Domino kiu kiu D.Fleur Leonora: Very energetic article, I liked that a lot. Will there be a part 2? Kjøp Tottenham Hotspurs Fotballdrakt D.Fleur Wilburn: Hi there, I enjoy reading through your article post. I like to write a little comment to support you. Arsenal Trøje