When 500,000 people took to the streets of Kiev in November 2004 to protest against election rigging there was a sense of something truly wonderful happening. An event of unprecedented import that would see the Ukrainian people wrest power from the corrupt, Moscow-backed oligarchs that had ruled the state ever since the fall of Communism in 1991, and would hand power to a pro-democratic leader who would steer Ukraine westwards to economic prosperity and political freedom within Europe - all this seemed on the cards. In the short term that is exactly what seemed to have happened, but several years down the line, when we examine the events of the Orange Revolution and the political status quo in Ukraine today, is that what happened?

The last months of 2004 were certainly an exciting time in Ukraine's history. Presidential elections were forthcoming, and there was a hotly contested campaign being fought between the two principal candidates, Victor Yanukovych and Victor Yushchenko. Yanukovych, the current Ukrainian Prime Minister, had the backing of outgoing president Leonid Kuchma, a pro-Russian statesman who had reinforced ties with Russia after being elected in 1994, whose final years in office were dogged with corruption scandals. Yanukovych also had the backing of much of heavily russified East Ukraine and the open support of Vladimir Putin (who, as we all know, is ever keen to maintain a Russian sphere of influence in old Soviet states). Yushchenko meanwhile, a pro-European and pro-democratic leader enjoyed the backing of Yulia Tymoschenko, a charismatic and extremely popular politician who chose not to run herself in order to support Yushchenko (but who was promised the post of prime minister, should Yushchenko win). Voter wise Yushchenko was supported by the vast majority of Western Ukraine and much of Ukraine's younger generation. The campaign was not fought cleanly, with Yushchenko nearly dying of Dioxin poisoning (he survived but was visibly disfigured) widely regarded to be perpetrated by supporters of Yanukovych. 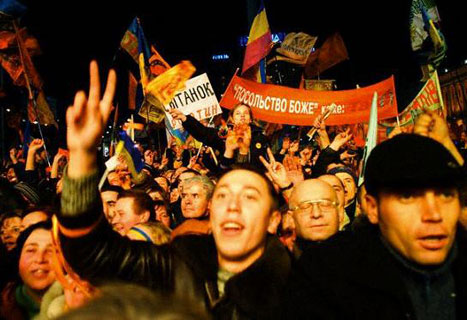 The First Round of Voting

The first vote of October 31st, 2004, was a tight run contest and, despite allegations of vote rigging, the two candidates ran neck and neck with Yushchenko collecting 39.87% and Yanukovych 39.32%, with other parties making up the rest of the vote. With neither party claiming the 50% required for victory, a run-off vote was then ordered by law for November 21st between the two leading candidates to determine the presidency. When Oleksandr Moroz, the third placed candidate in October's vote and leader of the Socialist party, threw his weight behind Yushchenko the vote seemed all but a foregone conclusion.

Needless to say Ukrainians turned out in their millions to vote in the run-off for president. Exit polls (polls taken by the media asking voters who they voted for) had Yushchenko up to eleven percent in the lead, however when the official results were tallied they had Yanukovych up by three percent. There were immediate and widespread accusations by Yushchenko, his supporters and Ukrainian and foreign monitors that Yanukovych's adherents were engaging in electoral fraud, including voter intimidation, physical assaults and the torching of ballot boxes with Yushchenko's campaign able to provide solid proof in many instances (for example they had trained thousands of volunteers and sympathisers to record what happened at the polling stations using video-cameras). Meanwhile the state-controlled media reported no violations were occurring.

Then came boiling point. Years of dissatisfaction with their politicians came to a head at this point for a large proportion of the Ukrainian people (although not quite as spontaneously as it seemed, but more on that later!). Convinced that their votes were being undermined and that the election had been stolen thousands of Yushchenko supporters took to the streets determined to claim it back, publicly exhorted and encouraged by the Yushchenko electorate campaign. The day the results were due to be announced, 21st November, hundreds of thousands gathered in central Kiev, flooding Independence Square and blockading government buildings (the Parliament was largely pro-Yanukovych). Yushchenko's supporters were easily identified by their orange garments and ribbons, orange being the colour of the Our Ukraine party of which Yushchenko is the head. The bright warm colour certainly made a striking impression against the Kiev winter snow, and the strong visual impact was responsible for the term coined later of the Orange Revolution.

This mass protest was a spectacular coup pulled off by Yushchenko's campaign and far from a spontaneous outburst that it might have seemed to the outside observer from the West. As Yushchenko urged his supporters not to leave Independence Square until the fraudulent election results had been annulled, his campaigners had already organised the means for them to remain as long as possible in what was a very carefully planned operation. 5,000 tonnes of porridge and 10,000 loaves of bread were supplied to protesters each day, 300 portable toilets were laid on, tents were supplied with heaters (to combat sub-zero temperatures), plus foam pads and sleeping bags, with 11 truckloads of rubbish spirited away each day - largely financed by American money. Meanwhile Ukrainian popstar Ruslana and the Klitchko brothers (Ukraine's famous heavyweight boxers) appeared on stage to lend kudos to the campaign.

Behind the scenes even more important work was being done by Ukraine's top spies and military generals. General Popkov (possible urged by Russia, or pro-Russian sympathisers) was ready to take military action against the protesters, but a series of phonecalls made by and to various highly influential parties averted any chance of violence. These key members of the security services feared that if troops were deployed then there might be a repeat of Tianamen Square (many of the generals had family members who were at the protests in Independence Square) or worse could trigger a civil war between the East and West of Ukraine. This was a crucial development as it was thought that the military was in the hands of Kuchma, Yanukovych and other pro-Russian stakeholders.

With Yanukovych unable to call the military to his aid, and with his own supporters protests in Donetsk, his political stronghold, impotent in comparison, the two opposing candidates were clamped in a deadlock, whilst vast numbers of Ukrainians continued to strike, protest and practice peaceful civil disobedience.

Behind the Scenes Negotiations

During this time of highly visible protests however much of the nation's fate was being decided behind the scenes. Yushchenko, Yanukovych, Kuchma, and other high-level officials held three meetings in the ensuing twelve days in an attempt to negotiate an end to the political stalemate. The result was that Yushchenko got his wish of a second runoff election (the Supreme Court announced on the 3rd December that they had annulled the results of the first runoff election) and the two sides also agreed upon reforms to reduce electoral fraud and, importantly, to transfer some of the Presidential powers to parliament. This package agreement was immediately ratified by the Ukrainian parliament.

The second run-off election between the two Victors, Yushchenko and Yanukovych, took place on December 26th under extreme scrutiny from Ukrainian and foreign monitors and press. On 28th December the Election Commission declared Yushchenko the winner with 52 percent of the vote, versus Yanukovych's 44. Subsequent legal cases filed by Yanukovych were all summarily dismissed by the Supreme Court and Yushchenko was officially sworn in as the President of the Ukraine on 23rd January 2005.

...or was it? At first glance it is easy to sell the Orange Revolution as a fairy tale story. A story in which the people rose up and took control from the politicians in a tremendous show of democratic power. They crowned their champion, a man who bore the terrible scars of his suffering for the cause, and who promised to fight corruption and bring prosperity to the land and the bad guys were forced to leave the political arena never to be heard of again.

Unfortunately politics are rarely black and white - and it seems even rarer are they orange. Yushchenko's presidential term has been characterised by power squabbling and bickering and although both economic growth and foreign investment are on the up, Ukrainians' hopes have turned from optimism, into anger, despair and frustration.

One of the first signs that the Orange euphoria might have just been a giddy high, came in January 2005 with the sacking of Yulia Tymoshenko from the post of prime minister. Tymoshenko, was dubbed the 'Orange Princess' for her role in helping Yushshenko get to power however she has proved to be a thorn in the president's side ever since, often obstructing his policies and proving erratic and power-hungry.

Worse yet for Yushshenko, Yanukovych - far from fading into oblivion - has seen his popularity rise meteorically. In March 2006 his Party of Regions won general elections and he has since taken the post of Prime Minister putting him right back in the centre of the action. Still enjoying the unflinching support of his power base in the East he has been treading a more pro-Western line on many issues in the hope of winning over some of Yushshenko's supporters.

Perhaps this is what distresses the Ukrainian people most of all. Years down the line from the Orange Revolution and the same figures - Yushchenko, Yanukovych and Tymoshenko continue to squabble over policies and vie for power, whilst the same corrupt oligarchs and tycoons get richer with little improvement in the state of affairs for the average Ukrainian.

The Orange Revolution will always be remembered as a momentous occasion when the people, if only for a few days, seemed more powerful than the forces that governed them. But with Ukrainian politics quickly reverting to the status quo, it seems that flash of orange was a false dawn...

For more information on the meticulous planning of the Orange Revolution, check out this article by the Guardian: A 21st Century Revolt

For more information on this thread of the Orange Revolution read this detailed article by the New York Times: How Top Spies in Ukraine Changed the Nation's Path

For more information of Kiev, head to Kiev Life homepage.