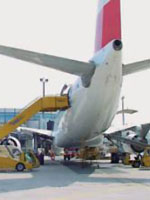 Above: Vienna airport is amply served with connections


Below: Will Mum never pack light? 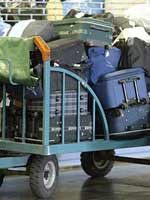 Vienna airport is a very laid-back place that serves as a perfect intro to the city itself. Languid fellows loaf about drinking coffee and smoking cigarettes - there are no obvious signs of rush. Combined with this unruffled atmosphere, Vienna airport has the added bonus of being linked to most of the major cities of the world. Cheap flights may not be in abundance but UK passengers can fly for next to nothing to cities like Graz and Salzburg. From there you can hop on a train to the capital.

Vienna's place at the heart of Europe means that you won't be hard-pushed to find a connection. Inter-railers can approach the old Habsburg capital from just about every angle, with direct train services from dozens of Western cities. Vienna is also well-connected to Central European gems such as Krakow, Prague, Lviv and Budapest. You can check connections here. 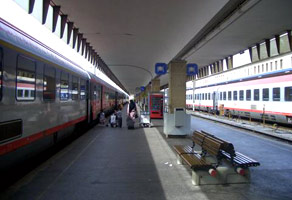 Austrian roads are for the most part a joy. And these days you can drive all the way from Calais to Vienna without having to show your passport once. Nor will you have to change your currency, as it's Euros all the way. We tried our hand at this trusty adventure, and it even had the effect of converting our euro-sceptic passengers into inspired adherents of the Union! That said, unless you're driving the Batmobile, this is not the quickest way to cross Europe. But on the other hand, the customs officers might be slightly suspicious if you roll up dressed as a flying rodent.

Sleeping on a bus, or at least trying to, doesn't rank amongst life's greatest pleasures. After a jolly start to the journey, most faces become a trifle sour after the first night. But as with the arrival of Spring after a Russian Winter, you'll feel you've earned your break when you reach base. Besides, you're saving a lot of cash, and you'll see something of the expanse of Europe on the way. Eurolines offers a range of options on the European mainland, whilst Britishers can hop on a bus from London's Victoria.

No, we're not pulling your leg, or foot, if we can slip in a fantastically bad joke (drum roll please). No, this mighty journey has been done dear readers. A walk to Vienna and beyond inspired one of the classics of 20th century travel writing, when a young writer - fresh from being expelled from school - set off from the Hook of Holland to the bay of Constantinople. So if you get kicked out of college or your boss decides that your services are no longer required, all is not lost. Perhaps you can reinvent yourself as a modern-day minstrel.