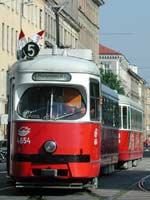 Above: If you touch the silver nose, it will play Strauss. But beware - the black mouth bites. Below: Spot the hedgehog. 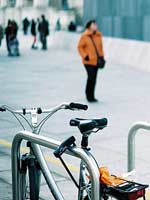 One of the absolute pluses of Vienna is that the entire expanse of the Innere Stadt (the Inner City) is pedestrianised. This central zone encompasses all the historic treasures that were enclosed by the medieval walls. And in this neck of the woods, walking is a pleasure. The only vehicle you might encounter is the occasional horse-drawn fiaker. All the same, whilst you could easily spend a whole weekend without stepping beyond the Ring, visitors to destinations such as Schonbrunn will need to investigate the public transport system.

Vienna's underground rail network is again a much more laid-back affair than its Parisian or London counterparts. The so-called rush hour doesn't really seem to have found an equivalent here - hussar for that. The U-Bahn follows a straighforward colour-coded system, and information pamplets in English can be picked up at most stations. 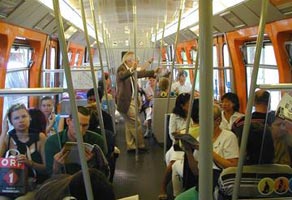 If you want to traverse the city and still be able to see how the Vienna jigsaw fits together, the tram system provides the answer. This old-fashioned legacy has its charms in a gracious city like Vienna. What's more, we're hazarding a guess that most film buffs will probably drop short of following Orson Welles down into the sewers. In which case, the tram is a way of following in Harry's footsteps without risking some slippery surprises. Nostalgic souls make haste as some superslick porsche numbers are now joining the fold.

If you need to make a quick dash to the station, bear in mind that you'll have trouble flagging down taxis on the street. Don't worry, it's not because you're staggering around with a beer can and a kebab. OK, maybe it is, but technically, taxi-drivers are not supposed to stop. Instead, ask a gallant citizen where the nearest taxi rank is or ring a firm direct. Most operators (and drivers) understand English, but don't expect them to quote Shakespeare.

The tram casts its tentacles far and wide, but it can't reach every last corner of the city. In which case, jump on a bus. There are also regular services to the airport.

hi ,if i am a tourist what is the best card i buy to use public transport for me&family all 4 persons.thank u