They might have been tailor-made for the Rolling Stones' recording studios. But Vienna's female politicians have failed to see the joke about the naughty, mouth-shaped urinals by the National Opera. Indeed, the ladies claim that humouring the three-year old terrors is akin to showing sympathy for the devil.

Buckling under duress, the owner of the facility has agreed to remove the urinals, so it looks like blokes won't be getting no satisfaction in the immediate future. But enough dodgy Rolling Stones jokes. As the owner himself expressed, you can't always get what you want. Yes - terrible, terrible. No more terrible puns..... 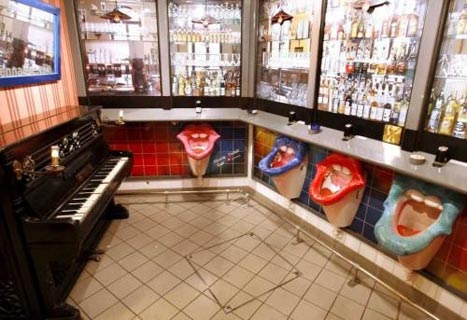 Above: The mouth-shaped urinals at the centre of the storm

Coming back down to earth, readers may be wondering how this furore came about. The urinals had in fact been open for business for several years now. The 'Opera toilet', which is part of a paying facility in a subway near the famed Staatsoper, had not received any complaints until recent months. However, national elections got tongues wagging, as the only public loos near the Opera House (a time-honoured canvassing venue) were the mouth-shaped miscreants. City Counsillor Sonja Wehsely attacked the conveniences as 'disgusting, misogynistic and tasteless beyond comparison.'

Vienna Life thinks that it would indeed take a very smooth-talking fellow to convince an audience that the urinals were in good taste. However, should they be banned? The city's artistic community thinks not. They've hit back at what they call 'green fascists' who are stamping on freedom of expression. Austrian talkboards have been aflame with arguments.

Ultimately though, its the owner himself - Neuhold Gerhard - who has to face the music. Originally citing fears of diminished earnings if he removed the urinals, he refused to be pinned down. He added that no men had ever complained about the designs. However, he's now backed down, although rumours are circulating that some American investors have shown an interest in ordering some 'George Bush' Bidets. So Neuhold Gerhard Limited is not done yet.

progressive toilets only for men? Any ideas for the Ladies room?