"The fine arts are five in number: painting, sculpture, poetry, music and architecture, the principal branch of the latter being confectionery."

So spoke Antoine Careme, the pastry chef extraordinaire who blazed a trail through Europe in the early nineteenth century. The funny thing is, there was a lot more truth in the proud Frenchman's words than you might at first imagine. For in those days, the confectioner was required to rustle up marvels of an altogether higher order. Sugar, pastry and marzipan were corralled to create architectural wonders that were often several feet tall and the length of a crocodile. Fantasy ruled the day... Palaces of sugar, greek gods or carriages pulled by mythical beasts - such feats were all in a day's work for the confectioners of old. And these creations were as beautiful to behold as if they had been carved by a Florentine sculptor. To put it bluntly, the marzipan masters of yesteryear make today's celebrity chefs seem like schoolboys.

But we're straying from the point. The golden age of the confectioner may have passed in Europe, but if there's one place where it has endured to some degree then it's here in Vienna. Even the French concede that the Austrians have the edge. Alright, not all the French do, but some grudgingly will admit that when it comes to cakes, the Austrians are wizards who command respect. 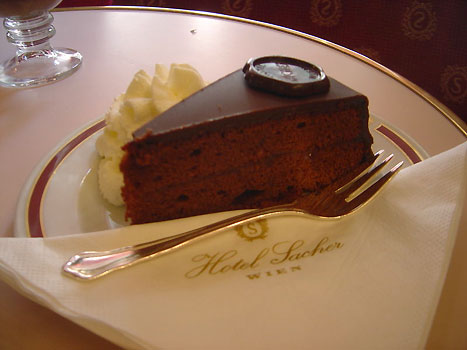 Above: Mirror, mirror on the wall, who's got the most authentic recipe of them all?

A couple of years ago, some very serious scholars were commissioned to carry out an equally serious survey. It was to determine which of our nations guzzled down the most chocolate each year. Of the 193 countries that make up this world, Austria came in second, just a whisker behind the Swiss. From this data, we can surmise that Austria's confectioners have a not entirely disinterested audience.

But what about the cakes themselves? Sachertorte, Imperial Torte and their ilk... Well, like all good things, legends swirl around the Sachertorte, the first of the great Viennese cakes. The undisputed fact is that it was created for Prince Metternich, the Iron diplomat of his day. On the eve of an important banquet (1832), the Prince instructed his staff to create a pioneering pudding that would bowl over his guests: 'Dass er mir aber keine Schand' macht heut abend!' he bellowed. ('You shall not bring shame on me tonight!'). The only problem was that the head chef was off with the flu... What was to be done?

Into the fray stepped an ambitious sixteen year old apprentice by the name of Franz Sacher. The young lad conjured up his chocolate and apricot masterpiece, and the rest is history. By the mid 80's Hotel Sacher - which was founded by Franz's son Eduard - was dispatching 100,000 sachertortes across the world each year. That said, it hasn't all been plane-sailing. For generations, Cafe Sacher was locked in a feud with Imperial confectioners Demel, who had rustled up their own version of the cake. Legal wrangles lasted all the way to 1963.

The Sachertorte may be the king of Austrian cakes, but there are plenty of princes and dukes pressing at the door. The delectable Imperial Torte has a pedigree that stretches back to 1862, whilst the Esterhazy Torte, the Linzertorte and the Truffeltorte are all long-established favourites. And that's to say nothing of strudels. So all things considered, sweet-toothed travellers will not be at a loss.

I think that the Imperial Torte is actually a much tastier cake than the Sacher. The Sacher has better PR that's all!