Santa Claus Given The Boot

Vienna's City Hall has confirmed that a wanted man is at large in the capital. The suspect is described as elderly, of portly build, and possessed of a fulsome white beard. Accounts are still hazy at present, but early reports suggest that the man is fond of wearing flamboyant red coats with matching trousers. Other witnesses have noted that the suspect is given to uttering eccentric greetings such as 'Yo ho ho'. One anonymous informant has even gone as far as to claim that the man owns a series of curious pets, including a herd of Scandinavian deer. However, police are not taking the latter report seriously at present.

That said, Detective Hans Kopfenmeister, head of the Vienna constabulary, is urging members of the public to report further sitings immediately, as the city is keen to make an arrest before December kicks in. 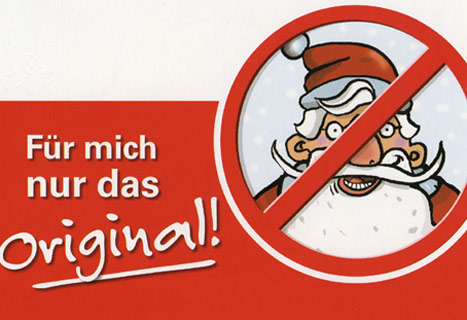 Above: 'Only the original for me!' runs the pro-St. Nicholas / anti-Santa campaign...

Well that's probably a long enough red herring for the moment. But Father Christmas has made the Viennese authorities see red this year. So much so that Santa has been banned from the main Christmas Market in front of the Rathaus.

Just what's inspired this festive ire? Have the Austrians lost their sense of fun? Did Santa have one too many mulled wines last year and stuff a snowball down the Mayor's dinner jacket? Not as far as we know. What the furore is actually about is that old Coca-Cola chestnut. And if you haven't already heard the dastardly tale - and we confess that we had no idea until a couple of years ago - the red-suited Santa was largely the creation of Coca Cola back in the 1930's. Before then, the good St. Nicholas ruled the roost, especially in Roman Catholic countries. Or so the Frankfurt Nicholas Initiative is saying in their current 'Ban Santa' Campaign. Vienna's authorities are joining the fight:

"Santa is an English language creation - people who want to see him should go to America where I am sure Coca Cola will be happy to oblige," a Town Hall spokesman was quoted as saying on Ananova. The source added:

"There are rules governing what stallholders can do and one of them is to agree not to use the image of Santa as a condition of being able to trade there."

Whilst it's true that Coca Cola gave crucial momentum to the contemporary Father Christmas look, the soft drinks company was not in fact the first to promote the red-suited image, as recent research has revealed.

All the same, such caveats are of little importance to the Frankfurter Nicholas Initiative. They'd like to see the red-suited fellow booted back across the pond. Speaker for the group Bettina Schade reflects:

"We object to the material things, the hectic rush to buy gifts, and the ubiquity of the bearded man in the red suit that are taking away from the core meaning of Christmas. The Christian origins of Christmas, like the birth of Jesus, have receded into the background. It's becoming more and more a festival that is reduced to simply worldly gifts and commerce."

The Assault on Santa - Official Site....!

At last, an organisation with sense. The world has gone mad when it comes to Christmas. the true spirit is back and I am not suprised it takes place in Vienna. good luck with your initiative.