The countdown has begun. A laser-show lit up the night sky from Vienna's Town Hall marking 500 days to the off. The mascots are up to their mischief, the team-strips tailored and tickets are selling like sachertorte. And on Sunday June 29th 2008, two sides will square up at Vienna's Ernst Happel Stadium for the grand final of the European Cup. The bookies are ready, and so should you be!

It was a long struggle for Austria to win the host's baton. In 2004 they got to the last hurdle in a joint bid with Hungary, only to be pipped to the post by Portugal. But in a new bid with fellow mountain men the Swiss, the Austrians came good. The action will be divided between Austria and Switzerland, with matches played in eight cities from Innsbruck to Zurich. 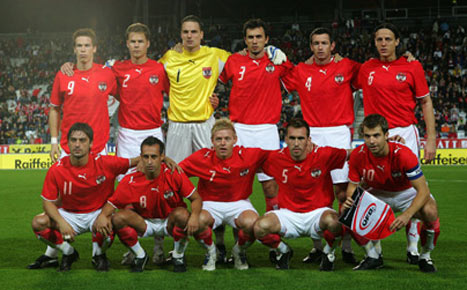 Above: Can Austria pull something out of the bag for Euro 2008? Recent performances suggest we shouldn't hold our breath!

If your eyes are on the main prize, you''ll be snapping up places in Vienna. The Austrian capital has scooped two quarter-finals, a semi and the grand final itself, making it the focus for most of the high drama. It's a city of cakes, and the Viennese have plucked all the best cherries.

But if you're following a particular team (your own if you're European!) the action is spread far and wide. Austria and Switzerland are providing four stadiums each for the shenanigans. The Austrians will be showcasing Innsbruck, Klagenfurt, Salzburg and Vienna, whilst the Swiss are touting Basel, Berne, Geneva and Zurich. Of the latter, Basel gets the lion's share, with two quarter-finals and a semi.

Sixteen teams will take part in the tournament. As hosts, Austria and Switzerland have qualified automatically.

Euro 2008: Staying on the Ball in Vienna

That said, you don't need tickets for every game to soak up some of the tournament buzz. The revelry will surge through Vienna, where several viewing points are planned for the duration of the cup. Coverage of all matches in Austria and Switzerland will be relayed from massive screens around the capital. Of these, the pick of the bunch will be in front of the Town Hall (Rathaus). There an enclosure is ear-marked to accommodate 200,000 fans, with beer and sausage stalls to boot (much to the surprise of neighbouring nobs at the Burgtheater, who weren't consulted).

For several centuries Vienna rivalled London and Paris as one of the great imperial capitals of Europe. It's still right up there amongst the most sumptuous cities on the continent, offering a sensational backdrop for the coming cup. That said, for all its imperial whirl, Vienna is no mad metropolis. It's a distinctly homely place with a fondness for the laid back. There's always time to linger in a cafe and have a gossip. So much so that anyone who's set foot here of late will know that the prospect of a major football tournament presents one or two comic possibilities. For all things considered, Vienna is something of a dainty old dame. In fact, of all Europe's capitals, Vienna must rank as the most genteel of the lot (closely followed by co-host Zurich). It's no rough and tumble here - more cakes and strudel. In short, Vienna hosting a major football championship is a bit like Queen Elizabeth inviting a pair of Sumo wrestlers to square up in her drawing room. Monty Python would love it. All the same, foreign journalists have been hailing Vienna as an increasingly hip destination in recent years (with good reason) and fans should have a cracking time in the city - it's a beauty.

HELLO EVERYBODY I SEARCH TO COMPLETE MY COLLECTION A TICKET FROM THE MATCH N°12 EURO 2008 AUSTRIA POLAND. IS ANYBODY HERE TO HELP ME????? PLEASE SEND TO ME YOUR PROPOSITIONS I CAN BUY OR SWAP THIS TICKET REGARDS KRIS

Have booked tickets for final even though England's not performing. What the hell, should still be a great tournament. See you in Vienna!

I've got my tickets for Euro 2008 austria! See you boys there!

looking forward to Euro 2008 in Austria. Not sure who i'll support without the three lions being there, but my mate lives in Vienna so i'm going to go and soak up the atmosphere - which is always great during the big football tournaments

May the best team with the most luck win- Good luck to Sweden and Poland and Austria.

England out. They had it coming really. Maybe they won't have such an overblown image of themselves next time (which might even do the team a favour in the long run). In the meantime, the Viennese must be thanking their lucky stars that the barmy army will be taking time off. Meanwhile Euro 2008 remains wide open....

Can't believe England are still in with a chance! Thanks Israel, it's always professionalism at its most commendable when a team gives a good performance despite nothing to play for but pride. What with Croatia's slip up, things couldn't be looking much better for McClaren and the boys given the earlier forecast. Might see you all in Austria/Switzerland this 2008 after all!

A painful, painful loss last night. Yes, those penalties were painful. Russia wins - England hanging on by the hair of their chinny-chin-chin. Too much!

England are flying! Wouldn't say Euro 2008 qualification is in the bag, but we seem stronger than for a long time and for once you can say that we have real strength and depth in the squad - with Lampard being kept out!

Well, it looks like we Scots - the underdogs - may just be making our way to Austria next June. Top of the group so far!!. hard luck for Ukraine but its looking good for the Tartan army!!!!

We've already bought our plane tickets for Euro 2008! Expecting some quality football. And more.... Ladies of Austria - get ready for the Croydon lads!!!

The first half against Russia was one of the best performances I have seen from an England team in recent years. Our quality really showed (for a change) with great control and lovely passing movements. If we can keep this up not only will we qualify for Euro 2008 we could even go further and get to the semi-finals or even final. Ok, Russia put us under pressure for the first ten minutes of the second half, but the final scoreline says it all. We were comfortably the better team, and Owen proved we have a world class striker who will take his chances at this level and bury them. THe big question (for England fans at least... sorry if this is boring for the rest of you!) is whether McClaren should stick with same players. Ok, Heskey has done ok (actually the same that he always did - don't understand why he got so much stick before, or so much praise now) but Rooney will give us much more. Richards should stay above of Neville and as for the midfield I won't pretend to know the answers, but it should be a case of strong or really strong whoever the gaffer picks. See you in Vienna!

Can not wait until Euro 2008. Austria finally has the chance to be winning something!!!!!

Pete, at present, a weak beer is on the cards for the official enclosures. Also, plastic cups will rule the roost. However, there are plenty of fantastic places in Vienna to investigate worthier brews - all best for now...!

Is it true that Austria has banned all beer apart from a weak official one for the tournament?

Morten - as the English say -'that is how the cookie crumbles'

Looks like we won't be coming to Austria. All because of one Danish idiot! I can't believe it - whole nation suffers because of one idiot. Although he was right - it was never a penalty. Stupid referee. Stupid fan. F@ck life sucks!

Wow. Now Poland and Ukraine get Euro 2012. Hungary loses out third time in a row. Painful...! They've got to get it next time if they can still face it. Meanwhile, see you in Austria....!

I agree Stjepan, and not only Portugal, Spain too. And after their performance against Israel England might not even set foot in Vienna!!!

Surely Portugal??? Cristiano Ronaldo is probably the best player in the world PLUS they know how to take penalties a bit better than some teams!!! England don't look that cohesive - should they bring back Beckham????

spain will take the cup papa best team ever

That's an interesting theory Jerzy - perhaps the Poles will find their form. After all, if I remember rightly, they've been victorious at Vienna before. King Jan Sobieski saved the day at Vienna back in 1683. Perhaps it's time for a reprisal! See you at Ernst Happel Stadium - June 2008!

I think that Poland can be the black horse of the tournament, because Leo Benhaker is theri coach D O B O J U P O L S K A !!!

Can't wait for Euro 2008 in Austria - already booked my tickets over to Vienna! There was a fantastic atmosphere in Portugal in 2004 and I'm sure the same good humour will prevail in Austria and Switzerland... It is too early for a cry for of ROOOOOOOOOOOOONNNEYYY? Surely not!