Amsterdam is a remarkably tourist-friendly and safe city - but it's always best to stay on the safe side. Keep an eye on your belongings in busy spots like the Centraal railway station or Dam Square.

With cheap flights from budget airlines like EasyJet abound, most visitors to Amsterdam, these days, arrive by air. A proper international hub, and the largest airport in the Netherlands, Schiphol serves hundreds of destinations, including most major airports in the UK.

Public transportation in Amsterdam is organized by GVB, which runs an efficient system of trams, buses, a few passenger ferries, and a small metro system throughout the city and its environs.

The Dutch seem to have a natural aptitude with languages, with most comfortably speaking two or more languages fluently. While the number in…

The city of Amsterdam began its life in the Middle Ages, when its marshlands and swamps surrounding the Amstel river were populated by a small group… 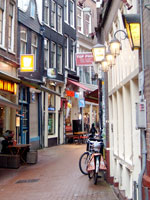 Above: The winding alleys of Amsterdam Below: The Royal Palace 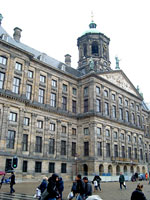 There's certainly no shortage of things to see and do in Amsterdam, but with its countless dedicated bike lanes and pretty canal-side streets - cycling and walking the city is a genuine pleasure. We've compiled the city's essential sights into a handy walking guide below, but you can also go in-depth with these useful pages all about Amsterdam:

The best place to start your exploration of Amsterdam is undoubtedly Dam Square - the spot where the Amstel river was first dammed, giving the city its name all those years ago. Surrounded by imposing buildings like the Koningklijk Paleis (Royal Palace) and the Niewe Kerk church you can truly feel the history in the air.

In fact, the city's oldest neighbourhood of De Wallen is just a few steps east of Dam Square, accessible via Damstraat and the many pretty canals which take you into the Red Light District and Chinatown. Further east is the Nieuwmarkt, the Old Jewish District, and bustling Waterlooplein.

Alternatively, walking west from Dam Square will lead you towards calmer grounds through the Golden Age-era Grachtengordel district and the hip Nine Streets neighbourhood, known for its quirky, fashionable shops, and located between the Singel and the Prinsengracht canals. Further west you'll find the quiet, idyllic Jordaan, home to the popular Anne Frank House. Intersecting Dam Square is Niewendijk (to the north) and Kalverstraat (to the south) - essentially one long pedestrian street, constantly packed with both locals and tourists keen to browse the high street shopping on offer. Heading north will lead you to the Centraal railway station, and walking south will steer you towards Spui which is where you'll come across the serene Begijnhof courtyard.

Continuing south down the Spui you'll hit the Singel canal, and crossing the next bridge will find you at Koningsplein square with the famous Bloemenmarkt floating flower market to your left. Walking down Leidsestraat from Koningsplein you will eventually reach Leidseplein square, one of the city's central points for dining and entertainment. The surrounding streets are home to countless restaurants, bars, and clubs, and some of the city's top venues are located here including the Melkweg cultural centre and the Stadsschouwburg theatre.

Turn left to Weteringschans street for a few minutes to reach Max Euweplein square. It's a bit of a tourist magnet (what with a casino and a Hard Rock Cafe), but it's also a reliable spot to find tourist-friendly services like bike rentals and canal boat tours.

Continuing down the pedestrian walkway, you'll cross the Singelgracht canal and be faced with the grand, main entrance into Vondelpark. Not yet ready for a break beneath the trees? Head across the street to Hobbemastraat, which will lead you to the gorgeous Museum district, a neighbourhood known equally for its luxury boutiques as its cultural institutions. With its striking towers jutting out into the sky, you won't miss the Rijksmuseum, which faces the expansive Museumsplein greens. With the Van Gogh Museum and Concertgebouw just steps away, only a quick snapshot of the iconic Iamsterdam sign can distract you from continuing on your Amsterdam explorations...

I stayed for a day in Amsterdam came there in the monrig and left in the evening. We had canal cruise and that was great, really great :). And then we spend some time in the diamonds museum and later just walked through the old town to see what these red lights look like and stuff. :) I can say that this diamonds museum was NOTHING interesting, really nothing :). But i guess there are other better, but in my opinion it's better to spend this time in the city itself, not in museum, if, of course, you aren't a real muesum-lover :)

This is a good introduction to the city. Perhaps a bit more about the canal boat trips would be helpful.