The Netherlands is home to the most liberal soft drug policy in the world, and there's no denying that some visitors to Amsterdam choose this city for that exact reason. In fact, the City of Amsterdam estimates that 23 per cent of tourists to the city visit a coffeeshop at some point during their stay.

The Dutch drugs policy, which arose in the 1970s, is based around the idea of separating hard and soft drugs, focusing efforts on strictly preventing the sale and use of hard drugs such as cocaine or heroin. The focus with soft drugs, particularly cannabis, has been to regulate its sale and use by taking it off the streets.

The sale of marijuana and hash is not officially legal in the Netherlands, however it is tolerated. As long as a coffeeshop follows a strict set of rules, it will not be prosecuted. Coffeeshops cannot serve anyone under 18, sell alcohol, or sell over 5 grammes of cannabis to a customer in one day. The sale or tolerance of hard drugs in a coffeeshop is strictly forbidden. Since 2008, the sale of magic mushrooms is also forbidden. It is also worth noting that the citywide tobacco smoking ban does include coffeeshops. 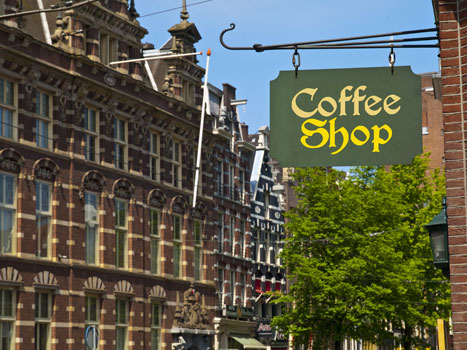 New Developments and the 'Weed Pass'

Over the last few years, there have been several new developments in the nationwide drug policy in the Netherlands. Parliament members have proposed the introduction of a "membership" card system for coffeeshops, available only to residents of the Netherlands over the age of 18. However, the implementation of these 'weed passes' is up to individual cities, and usually those most interested in the programme have been border cities such as Maastricht, which have attracted the biggest problem with "drug tourism" from nearby Belgium and Germany.

Amsterdam has appeared to be opposed to the "membership" system and its coffeeshops will continue operating as usual for the time being. However, the city has expressed concerns about the high number of coffee shops in the city centre, particularly in De Wallen which includes the Red Light District, an area which is currently undergoing long-term redevelopment.

Also on the cards is the possible redefinition of very strong marijuana with a THC content of over 15% to join the ranks of hard drugs. In that case, coffeeshops will only be permitted to sell marijuana with a smaller THC percentage.

Care to give that Mary Jane a try for yourself? Here are a few tips for making the most of the coffeeshops in Amsterdam:

- Don't simply stick to the coffeeshops in the city centre and the Red Light District. There are lots of cosy, unique neighbourhood coffeeshops in pretty areas like Jordaan and De Pijp. Not only can you hang with the locals, but you'll avoid some real tourist traps.
- Never buy drugs off the street - not only is it illegal (and pretty darn stupid considering all the coffeeshops around you), but street dope is not regulated like the stuff sold in coffeeshops, so you'll never know what you're ingesting.
- Public smoking is permitted, but try to respect those around you and keep it discreet.
- You must be 18 to use cannabis, and you can never carry more than 5 grammes - this rule doesn't only apply inside of coffeeshops!

Order the Best Quality Weed,Coke,Painkillers and Hash Oil online at affordable prices. For more details you can contact: Email... tplug05 at gmail dot com . Phone.....+1(559)420-0769 . Our delivery is secure and discreet. God Bless!!

I'm missing a crucial piece of info here. Where should I go when I'm in Amsterdam? I have one night and want to go to the best coffee shop in town. Amsterdam Life! Tell me!

Totally don't understand why every country does not follow Holland. High time it was legalised everywhere. Alcohol is more harmful !!!

Don't be an idiot. All narcotics should be completely banned. No excuse for allowing it at all.

Martin, I know you have been brought up to believe this is true, and perhaps met some people who abuse them in a harmful way and from an ignorant understanding. But I would warmly invite you to consider that many of these natural substances have been around and consumed by man since we were neanderthals. Since the very beginning things like mushrooms, coca leaves, marijuana, kawa, ahayuasca and even cacao have helped man to build and grow and develop by boosting our strength, immunity, creating new neural pathways in the brain and guiding us through evolution. In the times when we lived in a more rural natural way (which many still do today using the same herbs and natural medicines - where does medicine begin and end and where drugs?) they helped us to plough the fields, walk long distances to collect food and water, guide people through death or save them from mental illness. even so much of the art and music so famous today was created with the inspiration from these plants. and they are also the basis of all legal pharmacutical medicine - just processed greatly as to lose much of their other beneficial effect. Much like the difference between Many people today still use them in the same way - with respect and dignity and with the full intention of growth, kindness, compassion, love, intelligence and the continued evolution of mankind. With a warm heart, i encourage you to research quantum physics to see the true limitlessness and ultimate connection of our physical world, as well as the anthropology and real science behind sacred substances such as mushrooms, ahayuasca, coca and cacao.