If you're calling Zagreb from home to reserve your hotel or book a restaurant in advance, you'll have to dial +385 for Croatia. Omit the 0 and then…

Above: Follow that car! Below: The famous red, white and blue... Of Croatia AirlinesBy air Located in the village of Pleso 14km southeast…

Above: As you can see, no shortage of these in Zagreb. Below: Ride one of the last remaining commie relicsBy taxi Taxis, as in most cities…

Zagreb, being a capital city and destination for international travellers, has fully embraced credit card culture and all of your favourite logos and…

There's no getting away from it, Croatian - like any language from the Balkan/Eastern European region - is going to be pretty tough to master for the…

Whether as part of annexed or independent Croatia, Zagreb has always been the focal point and heart of the Croat population. The importance of the… 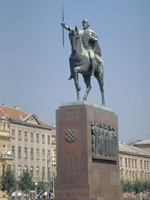 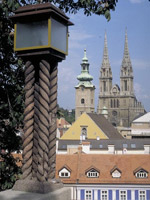 Zagreb may not enjoy the enviable reputations of many of East Europe's other medieval capitals, such as Prague, Budapest and Tallinn, nor does it have the draw of Southern Croatia's beautiful coastline and beaches - but all the same this oft-overlooked city well warrants discovering. Contrary to general perception (or lack of it) Zagreb is certainly not short on character, charisma and colour - with the added bonus that tourism is yet to show its toll. The thrill of visiting a city without British stag groups running rampant should never be underestimated!

Zagreb is divided into three distinct parts: the Upper Town, the Lower Town and New Zagreb. It is on the cobbled streets of the thousand year old Upper Town ('Gornji grad' in Croatian) that most tourists will want to start their exploration of Zagreb - and there's certainly a lot to see! The impressive neo-classical Presidential Palace aside, the cynosure of this district is the beautiful church of St. Mark's with its famed tiled roof, constructed in 1880. After you've admired these two buildings, be sure to let your nose lead you to some of the area's many museums and galleries. The Zagreb City Museum is well worth a look in.

If the Upper Town leaves you feeling a touch vertiginous after a while, venture down into the city to see what Zagreb's Lower Town has to offer. Most of the buildings of the 'Donji Grad' hail from the 19th century, and it is here you find the real heart of Zagreb - with shops, restaurants, cafes, theatres and parks in abundance. A natural starting point is the Bana Jelacic Square, named after Josep Jelacic, a Croatian freedom fighter and symbol of nationalism whose equestrian statue dominates the plaza. This large pedestrianised space is the perfect spot to grab a table outdoors and feel the pulse of the city - with a glass of Osjecko beer.

To the South West of the Lower Town find another essential tourist attraction, this time in the form of the Mimara Museum. One of the foremost museums of South East Europe this vault of treasures owes its 3,750 exhibits - and it's name - to a wealthy businessman and avid art collector. If you weren't expecting to see works by Rembrandt and Goya in Croatia, think again!

Of course, in a city of nearly 800,000 people such as Zagreb, there are too many attractions and tourist-worthy sites to mention in this small space. We suggest you get your map and compass at the ready and set off with the spirit of adventure in your veins. Don't forget too that it's not all dusty museums and pretty architecture. Check out the National Theatre for top performance art, and be sure too to explore Zagreb's bars and clubs. They are fast drawing attention far and wide - the nightlife round here has a real bite to it!