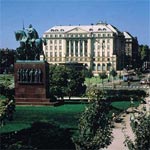 Many moons ago, the Orient Express made Zagreb a regular stop-over point on the journey from Paris to Istanbul, opening the door to the first significant numbers of tourists to Zagreb and paving the way for some of the first luxury hotels in the city - chief among them the Regent Esplanade. Zagreb's position along the historical trade route from Hungary to Austria and, more recently from Western Europe to the East has made it an ideal mid-way point between a multitude of nations and traders. With tourism on the rise and with Euro-backpackers increasingly adding Zagreb to their destination lists, the emerging Zagreb hostels and cheap hotels in Zagreb means Croatia's capital is better-equipped than ever to provide dwellings suited to all budgets.

Reviews about Where to stay...

I stayed there last winter. They have everything you need. For me, the staff A + rest A-

I would like to know rates per night to stay in at The Regent Esplanade hotel. We are a couple, preferring a king size bed, non-smoking.

A very good hostel. We liked it here a lots and staff were nice to us. Thank you, Janusz

Simple, basic but clean accommodation. Does the job.

Hotel Slisko was great. The beds were comfy and the cafe had a good coffee. Zagreb was a must-see for us, but we wanted a little luxury but not break the bank. A good little budget hotel.

It was not your ordinary place to stay the night, but that's what I loved about it. A bit of a walk, but also quiet and authentic.

Met some great mates here. No smoking, too.

Top quality hotel, you couldn't ask for anythin gmore one of the best i've ever been to in the world, let along croatia or zagreb... check it out, it's gorgeous!!

The Regent Esplanade is by far the best choice of hotels in Zagreb - in fact it is the best in the whole of Croatia. One look at the magnificent palace tells you you are in for a treat and the hotel staff treat you like royalty. dn't take any chances if you are coming to Zagreb - i advise you spend a little more and stay at the esplanade