The Altarpiece of St. Mary's

In Cracow, the worlds of history and legend often seem to blur into each other, and there are few finer illustrations of this than the tale of Veit Stoss, a character who might have stepped straight out of the pages of Grimm.

Stoss was born in the small German village of Horb am Neckar, and his rise as an artist was nothing short of meteoric. He swept aside the social barriers that were normally imposed on his profession, being granted the freedom of an imperial city and enchanting kings and bishops with the brilliance of his art. At the same time he achieved notoriety by draining resources on a legendary scale, spending twelve years to complete one altarpiece - a feat that makes Michelangelo appear positively brisk - and running wildly over budget. 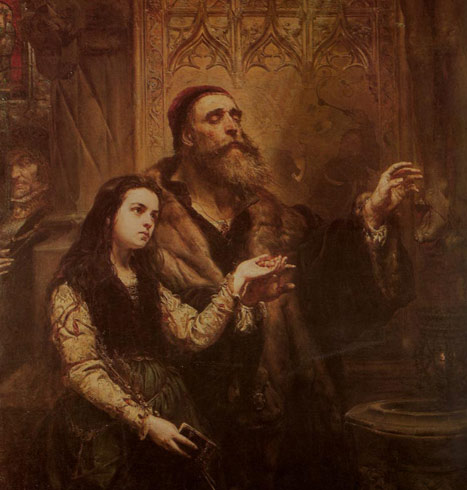 Veit Stoss's triumphs were certainly as spectacular as his failures. On returning to Germany he was thrown into prison for being involved in a fraudulent investment scam, and had it not been for the intervention of eminent figures such as the Prince Bishop of Wurzburg, he would have been blinded or put to death. As it was, he was let off with that most charming of medieval customs, a branding on both cheeks.

Stoss's creations would follow their own strange odyssey. His crowning work, the altarpiece of St. Mary's Church in Cracow, survived numerous invasions, only to be spirited away by the Nazis in 1939. However, unlike many treasures that were stolen from the city during that period, such as Raphael's 'Portrait of a Young Man', the work survived. Five years later it was discovered in the cellars of the castle at Nuremberg, and after careful restoration it was returned to its original home.

Stoss's finest work in marble, the tomb of King Kazimierz Jagiellon in Wawel Cathedral, was also to sail into murky waters. In 1973 a group of archaeologists were given permission to open the tomb by the then archbishop, Karol Wojtyla. Within weeks, sixteen people involved in the operation had died, prompting a host of speculation, both scientific and supernatural (poisonous mushroom spores were the culprit).

Quite apart from the worlds of legend and myth, it is certain that Stoss's creations will continue to enchant and astound. Five hundred years after the artist's death, his works remain amongst the most spectacular in Cracow.

The life of Veit Stoss, or Wit Stowsz as he is known in Poland, is amongst the best-documented of medieval sculptors. However, his early days remain somewhat shrouded in mystery.

Stoss was born in the Swabian village of Horb am Neckar around 1450, and as a young man he settled in Nuremberg, where he married Barbara Hertz (c.1470). Nuremberg was a bustling merchant city that had a strong tradition in the arts, and Albrecht Durer was amongst other great talents who settled there at that time.

This beamed city behind a great wall was a key trading point on an artery that spanned the expanse of Europe. This stretched south east through Prague, Breslau, Lwow, and from there on to the Black Sea. In this world Nuremberg had fostered a special relationship with Cracow, which had a large German speaking merchant community, and it was this connection that brought Stoss to the Polish capital in 1476.

When Stoss moved to Cracow he found a city that was enjoying its Golden Age. One of the grandest and most splendidly fortified cities in Central Europe, Cracow was also amongst the most prosperous. Royal privileges helped trade to flourish, and there were over thirty guilds in the city. The export of textiles, salt and lead were a tremendous success, whilst the timber and grain trade also flourished. Poland was known as the 'granary of Europe', and the port city of Gdansk provided the springboard for trade with the world at large.

The Royal Castle at Wawel was itself the nexus of a dynasty that ruled over a huge swathe of the European mainland. Poland may not have been the most powerful country in Europe, yet it was by far the largest, and in Stoss's time the Jagiellon dominions stretched from Prague all the way to beyond Kiev in the east.

The Royal University in Cracow had also just entered a golden era. Students from across Europe studied there (Copernicus was amongst the pupils during Stoss's lifetime), and a year before Stoss arrived in the city, Cracow opened its first printing press, hot on the heels of Gutenberg's experiments.

Stoss moved into a house on the Royal Way (no. 41 on Grodzka street) and set up a workshop. Experts are shaky in their attributions of works to Stoss from the Nuremberg period, yet the surest proof that he was already a famed artist by the time he reached Cracow lies in the simple fact of his commission.

The altarpiece of St. Mary's Church, which he set to work on immediately in June 1476, was a very prestigious work. The church itself, which dominated the main market square, is a mighty edifice that soars above the city. It is still amongst the most striking landmarks in Cracow, and the altarpiece was the crowning element in a long programme of reconstruction that began in the wake of the Tartar invasion. The construction of the church was a matter of no small importance to the merchants of the city - it was very much a symbol of their stature, a project that excited much civic pride.

Whether or not the merchants would still have chosen Stoss had they known how much money he was to get through is another matter. However, set to work he did in the Summer of 1476 and it was a very ambitious design that he envisaged.

The altarpiece for St. Mary's is some forty-two foot high and thirty-six wide. Folding wings extend to the north and the south, paneled on either side, and the whole work contains some two hundred figures. These range from small angels to the striking life-size figures of the central stage.

This main scene represents the Death of the Virgin, who is kneeling down, surrounded by the twelve apostles. Above, in miniature, her soul is being accepted into heaven, whilst at the peak, she is crowned beneath a gothic canopy, flanked on either side by the famous Polish saints, Stanislas and Adalbert. The opened panels on the sides depict smaller scenes in relief, including the well known passages of the Nativity, the Pentecost and the Adoration of the Magi.

Stoss and his pupils carved the entire construction from limewood. Much of it is gilded, which accounts for some of the fantastical cost: the altarpiece eventually ran to 2808 florins, which was roughly equivalent to the entire city budget for one year. However, this clearly didn't leave everyone in a frothing rage, as Stoss eventually became a free man of the city, and he remained in demand right up until his sudden departure from Cracow in 1496.

Despite the vastness of St. Mary's, Stoss's altarpiece dominates the church with a striking authority. Even if you are standing right at the back on a crowded day, the whole thing seems to command the show. As the altar was the fountain of God's Grace, and the art above it, the most important expression of the Divine, this is as it should be.

The lucid harmony and symmetry of the design are all important, yet it is the dynamism, energy and emotional depth of the figures themselves that really astonishes. Such was Stoss's attention to detail that even the veins of the apostles are rendered with an arresting realism. Fanning out around Mary, the group of the apostles ripple with a dramatic tension that is almost baroque - Stoss was a master who was far ahead of his contemporaries.

Whilst completing two other smaller commissions for St. Mary's, as well as a number of private works elsewhere, Stoss also created a work in marble that is arguably the equal of his limewood altarpiece.This is the tomb of King Kazimierz Jagiellon (r.1447-1492) in Wawel Cathedral. And if ever there was a work to evoke the Brothers Grimm then it is this. The tomb can be found in the Holy Cross Chapel, below Jozef Mehoffer's enchanting stained glass windows.

In a sense Stoss picks up from where previous sculptors had left off. The gothic tombs of Kazimierz's father and grandfather, with their reclining effigies and rippling canopies, were there to be studied in the main body of the cathedral. Yet Stoss takes this model and invests it with an energy and a magic that completely outshines the others. The whole thing seems to rise up with a magnificent sense of grace, whilst the figure of the king himself, and the tiny angels that adorn the capitals, are both exquisitely rendered.

To many, this tomb may well appeal more than the altarpiece in St. Mary's, which has a rather overwhelming use of gold. Dazzling the viewer with the glory of God was certainly one of the main points of an altarpiece, but the pure marble of the Wawel tomb may be more digestible to modern tastes.

Stoss left Cracow suddenly for Nuremberg in 1496. It is not known for sure why this happened, yet it was perhaps due to family reasons, and his wife died just a few months later in the German city of her birth.The urgency of the move is made clear by the fact that Stoss paid a large fine to the Church for not beginning work on a further tomb that he had been commissioned to deliver. Stoss was not to return to Cracow, but several of his children remained in the Polish capital, forging careers as goldsmiths and sculptors.

Their father married again two years later, but his life in Germany was certainly not plane-sailing. After the episode of the investment fraud, and the branding that went with it, Stoss was condemned to a miserable confinement within the city limits. The wily sculptor escaped, only to be caught and imprisoned again for a short spell. Confinement to the city began once more, but his work drew the attention of the art loving Holy Roman Emperor, Maximilian I, who granted him an audience. The kudos that went with this meeting seems to have put the artist's career back on track, and Stoss lived out his days in Nuremberg, continuing to work well into his eighties. He eventually passed away in 1533, his reputation undiminished as one of the greatest artists of his age.