The Magic of Mushrooms

If, like Cracow Life, you often feel the pull of nature to the forests, particularly for a madcap dawn adventure, there is one time of year to go whilst still pretending to be sane. Throughout September and October, Poles of all shapes and sizes head to the forests for the cherished custom of mushroom picking. And what the hell, why not get dressed up as a druid anyway, it's certainly not a crime to wear a white robe or carry a golden sickle, provided you don't attack anyone with the latter. 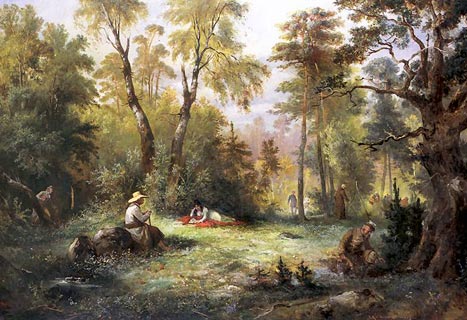 Poland is renowned for her mushroom bearing capacity, and picking the little blighters has been a custom since time immemorial. The practice is even enshrined in Poland's best loved epic 'Pan Tadeusz', penned by the Romantic hero Adam Mickiewicz (1794-1848). Poles recall with a smile the scene 'Grzybobranie' ('Mushroom Picking'), which spices up the romantic entanglement at the heart of the tale:

Mushrooms abounded - round the fair damsels the young men did throng;
Or vixens, as they're hailed in Lithuanian song.
They symbolize maidenhood, their flesh no maggot bites
And no insect thereon ever even alights.
The slender bolete maidens pursued instead,
That colonel of mushrooms as it's commonly said,
But all hunt for milky caps which, though not very tall
And largely unsung, are the tastiest of all...


But before Cracow Life gets inspired to wander into deeply pretentious territory, here are a few basic tips on the weird and wonderful world of Polish mushrooms ....

Just as if you were exploring the Amazon forests for undiscovered flora, we'd advise taking a native friend with you on your adventures. It's not that Poland's forests are full of tigers or other fanged fiends. But picking the wrong mushroom can be equally as deadly: you need to know your mushrooms, to ransack an old phrase.

As regards the misty early morning start, Poles have a strong penchant for fantasy, but the main reasons why people opt for dawn raids are more practical. Besides wanting to beat any other hunters to the precious shrooms, Poles know that they taste at their best if you cook them the day you pick them. Mushrooms lose their quality quickly, and left-overs have to be pickled (this is no great tragedy, as Poles are masters of the pickled mushroom).

Around Cracow, anywhere with a good mix of deciduous woodland is a potential mushroom oasis. Favourite hunting grounds include the foothills of the Beskidy, which are accessible from Nowy Sacz and the old spa town of Krynica. However, all is not lost if you can't make it to the forests.

Of course, if you're shacked up over here in Cracow, you might not always have time to go on an Arthurian adventure. And in this case, there's an excellent, if somewhat more expensive alternative.

Stary Kleparz is a marvellous market on the northern fringe of Cracow's Old Town. Farmers have been selling their goods here for centuries. It's one of the most distinctive and colourful places in the city.

In September and October mushrooms steal the show. The sheer sight of them is a delight in itself, from the small, cream-coloured 'kurki', to the tasty orange 'rydze' , to the giant 'kania' which can grow as wide as a pizza and as thick as a doughnut.The vendors themselves, generally lively old grannies with leathery faces and patterned headsquares, complete the folkloric picture.

We're sorry to say this but Cracow's restaurants seem rather slack about championing Poland's finest vegetables. Many Poles will tell you that if you want to eat well here, you have to eat at somebody's house. Whilst things have improved dramatically since communist times, there is still some truth in this notion, especially when it comes to classic Polish food.

All the same, if you're over here as a student, or you're an expat on a protacted business venture, there's no reason why you can't have a go yourself.

(In no particular order)

Rydze: These orange chaps are a classic option. An old polish saying goes 'zdrow jak rydz' ('healthy like a rydz') - bugs can't munch these fellows, but thankfully we can.

Cook: A classic and very simple way to cook rydze is to fry them with butter.

Cut off the storks, then rinse the remaining caps. Before you fry them it's important that they're dry, as they're not so good mushy. Warm some butter in a pan, then fry till crispy.

Not at all bad with a glass of red wine.

Cook: One popular way is to fry a carton of kurki in some oil for a few minutes (having cleaned them thoroughly). Then add generous dollops of cream, until you have a sort of custard of mushrooms. Simmer for a while until all the juices have done their job.

Excellent with a cutlet.

Kania: On the subject of cutlets, these giants can be prepared exactly like a meat cutlet (and they end up tasting deliciously meaty too - apologies to vegetarians).

Cook: Roll the giant mushroom in some flour, then follow the same process with some egg yolk. A couple may be needed. Fry until golden.

Prawdziwki: These mushrooms literally translate as 'the true ones', and they're amongst the most popular. Again, you can cook them in a very straightforward way.

Cook: Bung some cleaned caps under a grill, under side up. Sprinkle on some salt and some lashings of olive oil. Then grill for 5-10 minutes.

I was taught to pick a mushroom my dad called Maslaki. They only grew under and around pine trees. I often wondered why they only grew there. If anyone has an answer let me know.

It would be really helpful to have the scientific names of the mushrooms that one can get in Krakow.

How many years will dry mushrooms keep from poland

Thanks very very much for this Crakov' story with mushrooms! It was: 1. a very nice first knowing about this site, and 2. a good relaks when i'm reading this story. With best regards, Nina, biotechnologist, Kyiv, Ukraine.

Great article! Your sense of humor is spot on! Love to pick shrooms and in NYC area I always get questioned by Park Rangers... a for my sanity and also if I'm some kind of a drug dealer... :)

That's funny. In Ohio some rangers don't allow you to pick Shrooms, acorns, or anything the animals could eat.

It's great fun searching for mushrooms. Having lived in Poland, I'm now confident I can find them in English forests too, and have been introducing my family to the shrooms!

i am from witow poland and i pick mushrooms every year on vacation ,i find that the best ones are kurki , enjoy!!!!