As you ascend the stairs to Wawel Cathedral, you may notice a curious selection of bones that are chained to the wall on your left. One of these looks as if it might have come from the rib-cage of a blue whale. The other, an ancient, snout-like relic, is even more fantastical in its appearance. If you are puzzled as to the provenance of these objects, then do not fear. For enlightenment can be found embedded in the western defense wall above the river. There one finds an eighteenth century plaque, and it reads as follows:

KRAKUS, A POLISH PRINCE
RULED AD 730-750.
HERE IS THE CAVE
IN WHICH HAVING KILLED THE WILD DRAGON
HE SETTLED AT WAWEL, AND FOUNDED THE CITY OF CRACOW. THIS INSCRIPTION WAS MADE BY STANISLAS JABLONOWSKI, PRINCE OF PRUSSIA AND CAPTAIN OF THE POLISH ARMY ARTILLERY 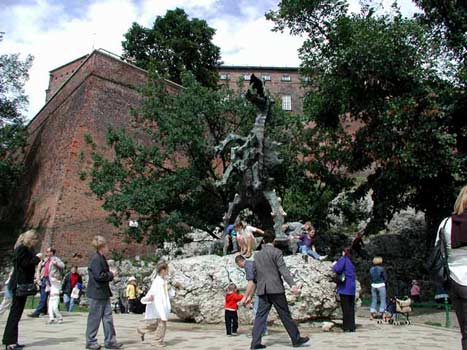 A dragon-slayer, no less, who killed a monster and ascended the throne of Cracow. It is a legend that remains amongst the best-loved in Poland. The entrance to this beast's lair can be found at the westernmost point of Wawel Hill, and it commands a fine view over the Vistula. From here you descend a dizzying flight of steps, after a hundred or so of which the temperature suddenly drops, setting the tone nicely for the job at hand - the slaying of the infernal dragon.

The caves below are dank and mysterious, a suitable backdrop for such chivalrous adventures. However, if there are some who would prefer an unassailable historical reason for investigating the place, then they too are in luck. For the caves did receive a second incarnation. During the seventeenth century, to the delight of many aristocratic adventurers, both an inn and a brothel were to be found here. It is claimed that kings themselves distinguished the chambers with their presence. A most agreeable distraction to be sure.

My daughter loved it

Wow! Even UK attraction pages don't use this kind of posh language to present their treasures. You may consider simplier language for all potential users of the page to understand, not only natives;)

When I was much younger I was fascinated by dragon-lore and dragons! My girlfriend N.Slawinska (fron Cracow)fascinated me with this tale. However, now that I'm 40 I tend to find greater allure in the other story (about the Inn and brothel), funny how one changes...

My ancestors were Polish Jews. However, it has been more than 200 years since my family lived in Poland. Fascinating stuff!!

My ancestors were Polish Jews. However, it has been more than 200 years since my family lived in Poland. Fascinating stuff!!

Can't wait to meet the Cracow dragon! I'm coming with my parents in May! I read about the whole story at school. I love dragon stories!

I love this story! One of the best!

We had a great guide by the name of Dennis McEvoy (of Krakow) who showed us around - I HIGHLY recommend him. He was great!

this is the nicest think i ever seen in my life look after it forever .......