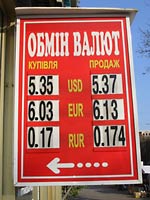 Don't expect to be able to use your credit card everywhere, although you're unlikely to have problems in higher end restaurants and hotels, likewise in good bookshops. All in all, payment by credit card is increasingly commonplace.

Our basic money advice is hold onto the stuff. No, seriously, don't wave about your wallet at the train stations, or on the street for that matter. But you probably weren't intending to do that anyway. The stunningly uncool money belt may in fact put your mind at rest on one or two scores there. Lviv is not sin city but pickpockets have been known to grace certain establishments, not least the train station. That money belt (maybe they'll soon have a retro chic cache.... hmmm, perhaps not) will help you to relax and soak up the glory of the aforesaid station. Are we mad? No, the Lviv station was the biggest in the entire Habsburg Empire when it was built, and it remains a soaring vestige of that era.

On the currency front, the bills that everyone loves are American dollars - the cleaner and crisper the better. Euros are also useful, but in day to day expenses the national Ukrainian currency is what you'll be dealing with, the blue and white Hryvnia (UAH) which come with various imprints of bearded national heroes.

Lviv is not awash with 'holes in the wall' as they're called in England, although frustrated local conservators will certainly assert that there are plenty of holes of a more literal kind. All the same, there are a few cash-points dotted around the historic centre, and that number looks set to grow and grow. Non-Ukrainian speakers will be relieved to hear that there's an English option in the system, so you won't have to worry about your card getting munched owing to lack of language skills. Forgetting your code after having drunk too much vodka is another matter entirely....

Your least fruitful means of paying your way - best to leave the cheque book at home.

There are lots of bureaux de change around town. Unless you're really stuck, don't bother with the ones at the airport, which don't offer the most kindly rates. Once in town there are dozens of other places to choose from, so you can shop around for the top offer.

I used my card to buy at the shops, no problem, however, I tried about 9 ATMs and it would not work. My daughter ended up sending me money by Western Union. I made some nice friends in Lviv, and I asked one of them to try and help me with the ATMs. They explained to a staff member of the bank that I had money. It would not work in english, however, they tried it in russian and oh oh oh it worked. Anyway the good news is that the pin code is the same in most languages and theyn looked away when I put this in. So if you have the same problem, try this out. TONY LIVERPOOL

Page might be a few years old perhaps? This summer (08) we found Bankomats (ATMs) very frequent in the city center. One word of warning to the fresh tourist: many bankomats offer very low dominations as pre-chosen. Probably convenient for locals, but when using visa electron or such it is not an economical thing to take out money in amounts of 10 to 50 euros at a time. Most machines seem to be able to give you about 10-20x the lowest suggested amount, so make use of that! But using cards to pay is still not common - here the Ukraine is about 10 years behind Poland, and even Romania. Even places advertising (or mentioned in guidebooks) that they take cards don't really want to do it - high commissions is one culprit, inefficient banks etc another and plain not being used to it a third.