A British diplomat at the Versailles Peace Conference once made the embarrassing blunder of confusing Habsburg Galicia with the Spanish province of the same name - he can't have won too many friends that day. Nevertheless, the realities of this region of Europe have often been kept foggy, a factor which suited some ruling powers.

The Kingdom of Galicia and Lodomeria was the north-easternmost province in the Habsburg Empire. Lemberg (Lviv) was its capital. The kingdom may no longer exist today, but the idea of it is still very much alive in the minds of Central Europeans. More often than not it is dished up as a sweet, romantic confection by restaurateurs, hoteliers and tourist brochures, much like the creamy cakes that you'll find in cafes across the old Galician lands. Emperor Franz Joseph I is an inextricable figure here, replete with his redoubtable lamb-chop whiskers. His reign (1848-1916) is looked back on with fondness not only by Austrians, but, crucially, Ukrainians and Poles too. 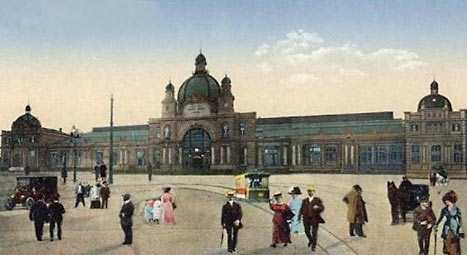 Above: The main railway station in Lemberg. When opened in 1903, it was the largest and finest in the Habsburg Empire.

All the same, scratch beneath the surface and the fairy-tale evocation of Galicia begins to unravel. Its very beginnings were the upshot of an international scandal: the province came into being as a result of the Partitions of the Polish Lithuanian Commonwealth (1772,1793,1795) by Russia, Prussia and Austria. The Austrians took the southernmost swathe, which became Galicia.

The stifling of the Polish and Ruthenian (Ukrainian) languages went hand in hand with the early attempts to consolidate Austrian power. The German language itself was enforced throughout the region's institutions, including the university of Lemberg and, later, Krakau (Krakow). Galicia enjoyed the briefest of liberations during the Napoleonic era, but after Waterloo and the Congress of Vienna, the prospect of independence was snuffed out again.

Meanwhile, Galician poverty became proverbial - it was the poorest region in Europe, and vast waves of immigrations - primarily to the United States - continued all the way until 1914. Life expectancy for a Galician peasant was dismally low.

In 1846, a Polish-led uprising was turned on its head when the Austrians encouraged the peasantry to attack their landlords. The ploy got completely out of hand with over 2000 nobles murdered before the Austrians restored order.

It seemed that Austrian rule would be bitter to the end, and yet within a generation, an almost complete about turn had transpired in the political realm. In 1868, with the Habsburg ship floundering in the wake of draining wars, Emperor Franz Joseph endeavoured to inspire loyalty to the crown by allowing far-reaching concessions. Galicia became an autonomous kingdom, and Polish and Ruthenian schools and newspapers mushroomed across the region. Polish became the main language again at the universities of Lemberg and Krakau, and Poles and Ruthenians rose high in the ranks of the provincial bureaucracy.

The twilight of Habsburg rule also saw a great cultural flowering. Local architects in Lemberg and Krakow helped restore some of the cities' ancient grandeur, whilst indigenous painters bowled over the critics in Vienna.

The Polish and Austrian nobility frequently intermarried, and even some members of the Habsburg family became polonized. Nevertheless, Polish conservatives blocked the rise of the Ukrainian language to an equal footing. At the same time, both communities clung on to the dream of Lemberg as a key city in their imagined independent states. This factor sowed the seeds for the showdown of 1918, when both sides claimed independence amidst the collapse of the Habsburg Empire.

In spite of all these complexities, a great many Poles, Ukrainians and Jews were loyal to the Habsburg crown by the close of the nineteenth century. 'We were one of several step-children in a rather unruly family,' recalled Count Alfred Potocki on Galicia's place in the Empire. The industrious Emperor Franz Joseph had become a much-loved figure, garnering a rapturous reception when he visited the realm in 1880. However, his vision was not to endure, and today, only the marvellous cakes and architecture remain.

My father was born y Galicia in 1903, and the previous text made me know, several aspects of the history I absolutelly ignore.- I thank you for this