It was a baking hot morning in June 2005, and for the first time in decades, some two thousand Poles had gathered for a ceremony at the Orlat ('Eaglets') war cemetery in Lviv. The reopening of the graveyard was being led by the presidents of Ukraine and Poland, who were joined by leading churchmen from both countries.

Just before the service began, a chill descended and thundercracks rang out, as if to underline the solemnity of the occasion. But the weather held, and as it turned out, the event drew markedly positive reactions from Poles and Ukrainians alike.

Many of the older men and women present that morning could still remember the Lviv of the 1930's - Lwow - which for a short interlude had regained its status as a city within independent Poland. Yet claims for the city had never been straightforward, and the inscriptions on the tombstones (mostly destroyed under the Soviet regime, along with the monuments themselves) recall a legacy of acute bitterness on both sides. That bitterness boiled over again during the Second World War. Soon after, the Iron Curtain descended, and with it an invisible wall between Poland and Ukraine. Travel between Poland and Ukraine was minimal during the Cold War years, and it is only in recent times that old prejudices have begun to dissolve. The reopening of the Orlat cemetery had been a decidedly thorny diplomatic issue for years. 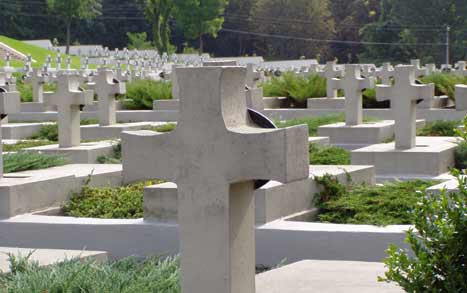 Above: Restored graves at the Eaglets Cemetery in Lviv

The cemetery was initially founded in the wake of the Polish Ukrainian War (1918-19). When the Habsburg Empire collapsed at the end of World War I, emotions bubbled over, and a street battle began between Poles and Ukrainians for control of the city. Ukrainians had declared an independent republic whose capital was Lviv, an unacceptable development in the eyes of the Poles, who were the dominant group in the city yet not in the surrounding countryside. Most of those that fought in Lviv were little more than teenagers, some even younger. The Poles won, and the families of the deceased petitioned the newly reborn Poland for a full cemetery in honour of the fallen.

All in all, there are over 2500 fighters buried at the Eaglets cemetery, although many of these fell in the later Polish-Bolshevik War (1919-21). There is also a monument to American and French pilots who fell in Poland's fight against the Soviet Union. The cemetery was actually designed by a young veteran of the clash, Rudolf Indruch, and there is something of a triumphal air in the grand architecture of the cemetery. Thus it is not difficult to see why the Ukrainians wanted their own monument unveiled during the official re-opening in 2005.

After the tombs were restored following the collapse of the Iron Curtain, the main wrangling point became the wording of the inscriptions on the monuments, which the pre-Yushchenko regime held were unacceptable to the Ukrainians. Most controversial was the Polish inscription about the soldier who fell 'for the fatherland.'

However, the Poles emerged as energetic allies of Ukraine during the Orange Revolution of 2004-05, which smoothed the way for the ultimate reopening of the cemetery. The very week that the graveyard was finally re-opened, Polish and Ukrainian bishops published a mutual letter of forgiveness for past struggles been the nations, mirroring the Polish-German episcopal gesture of 1965. With such a history, there was never going to be a 'happliy ever after scenario', but the emphatic embrace of both Presidents at the June ceremony will be remembered as a genuinely touching moment in a long-running saga.