Bed Down in the Old Town

The merits of bagging a bed in Krakow's Old Town are manifold. Landing yourself in the UNESCO-listed core will place you amidst princely palaces and stately old churches. With the cream of the city's restaurants, shops and bars at your fingertips, you're perfectly situated to enjoy the city. At this point, you're probably thinking that you'll have to cut a Dr. Faustus type deal with the Devil to secure a room in the ritzy realm of the Old Town. But the good news is, you don't actually have to resort to sorcery to land yourself in the heart of the city. There are a fair few mid-range options - there are even some hostels in the Old Town. But before we describe those unexpected offers (see below), we can't resist revealing some of the snazzier options, just in case you do want to dabble in some black magic. 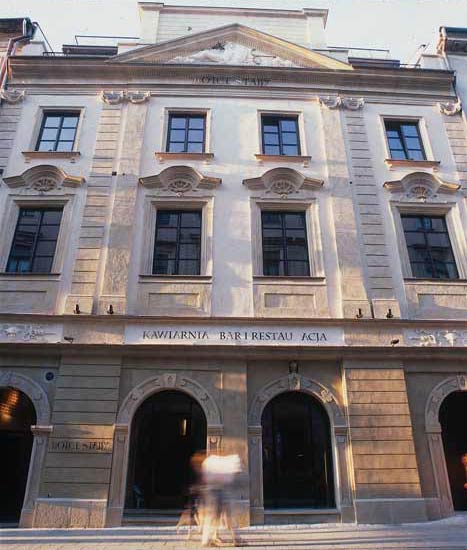 You can't get more central than the Old Town Square. And at the moment, there are two options to choose from on the 'Rynek'. The first is the Hotel Wentzl, a diminutive charmer with just twelve rooms on offer. If you can manoeuvre one of the rooms overlooking the square, you've hit the jackpot.

Next up is the Bonerowski Palace Hotel. Not the kind of name that trips off the tongue, but the hotel is indeed named after a certain Boner family, a powerful clan that lived here during the Renaissance. Opened as a hotel in 2007, it's a spic-and-span place with a more-than-enviable location.

That said, many might pick the Hotel Stary over the aforementioned two. Technically, it's located on an adjacent street, but in this case the hotel literally is a paper dart's throw from the Square. Many of the rooms look over the plaza, and the rooftop bar boasts one of the premier views in the city - of St. Mary's Basilica no less. The hotel itself is a trendy, boutique-style place with a blend of old school and contemporary cool.

The owners of Hotel Stary, the Likus brothers, have two other hotels in the Old Town, both intriguing choices. First up is the Copernicus, right at the foot of the Royal Castle. It's a glamorous place with much to recommend it, not least its fresco-ceilinged chambers and award-wining restaurant. The Likus brothers also run the Pod Roza, a safe bet on the Royal Way which won't have your bank manager making midnight calls.

Another premier choice, and one blessed with the quietest location in the Old Town, is the Grodek. Decorated by Princess Ingrid Lubomirska, it's a romantic hideaway with bags of style - unflashy but full of charm. A bonus is the in-house restaurant Cul-de-Sac, which boasts one of the best chefs in town, Rafal Targosz. The same team are also responsible for the superb Maltanski Hotel and Palac Pugetow, neither quite as central as Grodek but both equally as charming and homely.

A more palatial option is the Grand Hotel, a whopping complex a short stroll from the square. They have plenty of rooms, and plenty of history to boot. Once the palace of Prince Czartoryski (who lend their name to one of Krakow's most famous museums), the Grand was unveiled as a luxury hotel way back in 1887. Their good reputation has remained consistent from that day, although thankfully some of the furnishings and amenities have been updated.

Also well worthy of consideration is baroque boutique beauty the Amadeus Hotel, which has proved popular with guests as esteemed as bonnie Prince Charles. Its location on Mikolajska places you an underarm pitch from the Rynek, whilst remaining relatively sheltered from rampaging stag parties.

Well, we've pretty much wrapped up the luxury options in the Old Town. But what about the more wallet-friendly fare which we promised you...? First up is the Hotel Saski (on the same street as the Grand), approximately a diplodocus away from the the Old Town Square. It's a trusty mid-range favourite with some charming features, not least a century-old wooden lift. No smoking, please.

Another old school option in terms of reliability is the Hotel Pollera, which can boast stain-glassed windows by none other than Wyspianski himself. However, there are some brighter, cheerier options too if modernity is your middle name. Hotel Floryan (not to be confused with the Hotel Florian) won't break the bank, and the Hotel Jan is very reasonable too. A tad pricier is Pod Wawelem, a clean-cut new hotel by the castle, whilst also in the realms of the Old Town you'll find the mighty Ostoya Palace, the Polski, Wit Stwosz Hotel and Senacki. All will serve you well, although if you really don't want to take your chances international giants such as Radisson SAS and Sheraton Hotel provide piece of mind.

And if you think Old Town accommodation in Krakow is all about hotels, you'd be wise to think again. Many a Pole has converted his dusty old flat into a piece of prime real estate for the rental market, meaning tourists can have their very own apartment in Krakow (temporarily at least - the owners have a nasty habit of asking for it back at the end of your stay), and usually at a price much lower than you'd pay for a hotel room. Krakow Apartments have a large range of flats perfect for couples, families or big groups, or you can search through our sleep section for a comprehensive list of operators in the city.

Last but not least, there are several hostels to consider. Popular options include Mama's and Flamingo Hostel, not far from the square. Even more central is Hostel Rynek 7, bang on the plaza. For a full range of Krakow hostels hit up our dedicated page. You can book securely through Hostel Bookers.

Finally if you want to be absolutely sure of your hotel's location before you book, check out our rather funky map of Krakow, where you'll find that and much more...

a very handy page, thank you. Look forward to arriving in Cracow soon

Thanks. This is a really thorough rundown of the Cracow hotel scene! Has helped me make my choice - although it seems there are many different places offering great accommodation...