The Legends of Warsaw

Once upon a time (which is when these things always take place) lived two mermaids in the Baltic Sea. These half-fish, half-women were beautiful sisters who had spent their whole existence in the sea, before apparently getting bored of the life aquatic. One day they both decided to come ashore. The first sister headed up to the Danish straits, and so she sits at the entrance to the port of Copenhagen to this very day. The other sister swam first to the port of Gdansk, from where she decided to swim the river Vistula to its end. Fortunately for our story, the mermaid decided to rest on a sandy bank on the foot of what is today Warsaw's Old Town and, like oh so many ex-pats in the city, she loved it so much that she chose to stay.

Soon though, fishermen from the neighbouring village began to notice that someone was letting the fish out of their nets. Annoyed, they decided to capture the culprit and punish him. They didn't expect to find the mermaid, however, and as soon as they heard her beautiful voice, they vowed never to harm her (another reminder that men can be so easily swayed by a cute Polish chick). Soon, the mermaid would fill every evening with her gorgeous songs to the merriment of the villagers.

One day, a rich merchant was walking by the Vistula and spotted the mermaid. He had the bright idea, as merchants do, to capture her and show her off at a fair, making himself a fat profit in the process. He tricked her and threw her in a wooden shed, but her cries for help were so loud that soon a young (and undoubtedly handsome) fisherman's son heard her, and with the help of friends set her free. The mermaid, grateful for their aid, promised to defend them and their village, which would later grow into our beloved Warsaw.

Since then, the mermaid, armed with a sword and shield, has been protecting the city and its inhabitants. Today the mermaid of Warsaw can be seen all over the city, from the statue in the Old Town pictured below, to the city's coat of arms. 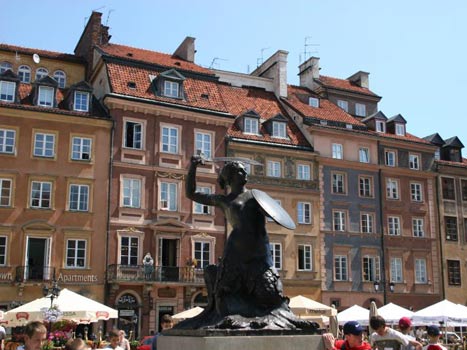 Once upon a time (again, funny how these things always happened then) there was a noble king of Poland named Kazimierz Odnowiciel ("Restorer"), and each year he journeyed from the then-capital of Poland, Krakow, north to Gniezno. The King would journey up the Vistula River to the north, and on the second day of his trip he was already tiring of the dried food prepared for him in Krakow. Craving a fresh meal and dreaming of fresh fish and milk, he noticed smoke coming from the shore, and soon he saw a small house.

The King ordered the ship to dock on shore and the King carefully made his way towards the house. As he and his company approached it, they could see it was a common fisherman's house. As was common in Polish custom, the hostess gave a very warm reception to the unexpected guests; she offered the King fresh milk and told him her husband, Piotr Rybak ("Fisherman") would be home soon with fresh fish. Soon, Piotr came home with a basket of fish he'd just caught, and soon his wife prepared them and they all sat down to a delicious meal.

As they were feasting on the well-prepared fish, the best the King had ever tasted, Piotr told him about the newest addition to his family, a pair of twins who had recently been born. The family was having a really hard time christening them, however, as there was no church in their village and the neighboring village was seldom visited by a priest. In fact, the priest had been there right before the twins' birth, so no one expected him to be back anytime soon.

The King had been very moved by the poor fisherman's hospitality and his story, and as he was leaving he put gold coins on the hosts' table. The fisherman would not accept, as it was old Polish custom to welcome all guests as family. But before his departure, the King requested to be received again on his way back from Gniezno, and to be honoured to as the godfather of the twins. He also decided to help the fisherman arrange a christening ceremony.

Two months later, as the King was making his way back to Krakow, he landed ashore at the small village accompanied by several boats. Piotr and his wife happily received them again. The King had kept his promise, and with him was a priest and gentry to perform the christening ceremony, and who bore gifts for the King's godchildren. On an alter made on a hill, the boy twin was christened Wars and the girl, Sawa. After the ceremony, amongst food and drink and merrymaking, the King declared that Piotr Rybak will be now called Piotr Warsz - the royal fisherman, the father of Wars and Sawa, and the owner of the vast forest in the vicinity. And as a settlement would arise in the surrounding lands, it would bear his name.

Years passed, and a village grew around Piotr's homestead, called Warszewa ("belonging to Warsz"). Whether the resulting name Warszawa came from Warsz or from the twins Wars and Sawa, no one knows, but eventually that village grew into our beloved city of Warsaw.

I’ve just been in Poland and was told the story of how Warsaw got its name - Wars was a fisherman who fell in love with a mermaid called Sawa . A story that ended tragically as she chose to become a human in order to be with him

Source of the article? :)

This is great! But when you edit this again, maybe add more historic events and stories... :)

i never knew this

OMG i'm polish and i never ever knew this ;P i have to say very good indeed

i love this i knew this wen i was 3 years old yes 3 my mum told me that so in the fucher i eill live in warszaw and here i am in that city.

I enjoyed the stories Dzienkuje Bardzo I have visited Poland 4 times so far and recommend it to anyone visiting Europe. I am proud of my Polish background and the fact that my Surname is part of a legend about Warsaw. It's one of the reasons I didn't change my name and took my husband's name in addition to and not instead of my maiden name. There used to be (I haven't checked if there still is or not) a department store called Sawa in Warsaw and even though I didn't shop there I took a picture in front of it because it had my name on it. Everyone I showed the pictures of my trip liked that one, it made me look like I was famous!

The Mermaid Statue is amazing. It's story is very interesting.

I really wish the second story of War and Sawa contained a mermaid. extremely disappointed.

Just got back from weekend in Warsaw and glad to find out why the city emblem is the mermaid and where the name came from. Evryone we asked did not know! But what an amazing story the modern city of Warsaw has, to have risen from the total destruction 68 years ago. Truly emotional visit to the Warsaw Rising Museum was aprt of a wonderful visit. Thanks to all we met.

A lady from Poland told me the story of Wars and Sawa at this year's WorldFest near Dallas. It was very interesting to hear.

2 good stories never heard them before

I liked the legend and the conclusion it had to it at the end but i also think that it could use a bit more mistery in it.

I have to write story-legend about my country ,which help me very much if I start to goat help from here..

Wow.Great info about Warsazawa and how the name came to be. I like knowing the origins of city names.. I was born in Marki and came by "boat" Batory at 6yrs. We still have lots of relations there.. My uncle Maciek Kolesnik was a known singer in the 50's . I now live in southern Ontario. Toronto area. Canada is so young compared to Poland. In such a small area it has mountains,protected forests,seasides and even a desert!and of course the people.So kind and welcoming. What a nice surprise to come across this site. Dziekujie.. BASIA

For an expat of 45yrs and at the age of 64yrs, there's never enough about Poland Maybe one day I'll fulfill my dream and visit that ancient land.

Maybe you can write something about the Miracle on the Wisla (Cud nad Wisla) - though it's more history than legend, it's pretty important for Poles and there's even a national holiday celebrating it every year...

I'm currently living in Poland with a family i met in London, fantastic welcome and fantastic people all round. Fallen in love with Poland. Thanks

Good information on this site

Polish people are generous and hospitable like the Maltese.They are genuine and love family and friends too.