While getting to Warsaw by train seems like the most romantic option, let's face it, if you're coming from London for the weekend the best option is a cheap flight from one of the many budget airlines offering connections to Warsaw. But with the range of budget airlines in Europe, how do you know which one will get you to Warsaw from your city? Luckily, we've compiled a comprehensive list below of direct routes to Warsaw. Keep in mind however that while we try to keep our information as accurate and up to date as possible, flights change pretty regularly so it's best to check with the actual airline before making any plans. And of course, if you find any errors in our flight lists or have any other suggestions, please let us know, we appreciate hearing from you! 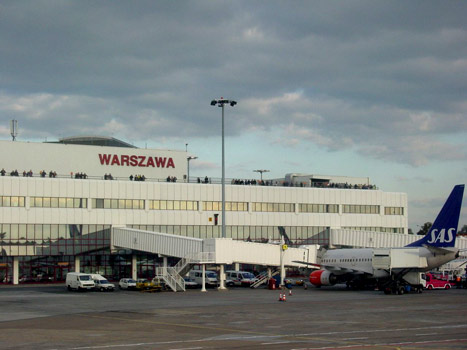 Flights to Warsaw Chopin from:

Above are the current direct connections to Warsaw, but remember, if you can't find the flight you're looking for, Krakow is just under three hours by train, and many major airlines and most budget carriers service Krakow or Katowice airports. So take a look at our Cheap Flights Krakow page and find your connection!

there are lots of flights to warsaw and minsk and kiev from warsaw, and also various trains.

Are there any flights to Poland from Russia

wizz air, bristol to warsaw starting 19 sept? bristol does not appear on wizz air departure lists of airports. is going to happen

how come you are taking bookings now from bristol/warsaw, but its not on your online booking form yet. can you explain how one gets through to book without having to make an expensive phone call.

Germanwings stops flying from Warsaw to Stuttgart from the end of March. Anyone knows why?

Excuse me, i have question is there any cheap flight from Hungary budapest to Warsaw?

Finally you guys got your act together and updated the cheap flights!! :P It only took, like, 3 years...

Following the instruction, I want to find a cheap flight from Warsaw to Munich, however it seems that Norwegian has no longer had such flights. So could anyone tell me which cheap flight should I choose now? Thanks a lot.

Any idea of the cheapest way to get to Hamburg or Berlin, preferably by plane

The easiest way to travel within Poland is by train. The journey from Warsaw to Lodz takes about 2 hours, and you can find a complete schedule here: http://nowy-rozklad.tktelekom.pl/bin/query.exe/en?

Hi!! I'm really desperate here so i'd appreciate any help that you can give me...i should be in Lodz,19.04 but i can't find any flight from the airports of Skopje, Sofija, Thessaloniki or Belgrade to Warsaw..i'd appreciate and if you can help me how to get from Warsaw to Lodz..thank you in advance Elena

Hi Alston, unfortunately there are no direct cheap flights between Russia and Poland - seems to me like a political thing =( anyway, one solution is a cheap flight to Germany, and from Cologne you can fly direct to Moscow. By air or train, either way getting a Russian visa, especially for Americans, is a huge hassle, I would recommend doing it as soon as possible and getting a tourist visa for 30 days. For more info on that, see our Russian visa page over on Moscow Life! - The Warsaw Life Team

What about using Warsaw for getting a cheap flight to either Moscow or St. Peterburg Russia? Is it easy for US passport holder to cross into and out of Russia on train, or less hassle with documents by air?

Really helpful! It seems you can get to Warsaw from just about anywhere in Europe, that's great!