Across the Vistula River from Wawel Castle lies the quiet neighbourhood of Podgorze (literally, "under/next to the hill"). Though until very recently it's been completely off the path for tourists, we think it's an up and coming area and definitely worth a proper tour of. But first, a little background information...

Podgorze originally arose as a seperate city from Krakow, established in by Emperor Joseph II of the Austro-Hungarian Empire as a rival across the Vistula River. The town developed quickly as the Austrians sought to create a "metropolis," the the full extent of their plans were never realized. From 1784 to 1915 it was administered as a separate town, and in 1915, on the brink of collapse of the Austro-Hungarian Empire, the town was incorporated into the administrative centre of Krakow and divided into five districts.

The Second World War is a tragic period in the history of Podgorze. It was in Podgorze that the Jewish population from Kazimierz was moved into the Jewish ghetto established there. From 1941 until 1943, the Jewish Ghetto took up a large part of old Podgorze, and Krakow's estimated 60,000 Jews were packed into an area of 20 hectares, often squeezing in four families in one flat. However, deportations began in 1942, and for many Polish Jews the Podgorze ghetto was their last stop before the death camps. Total liquidation of the ghetto took place in March 1943, during which thousands of the ghetto's residents were either shot in the streets or sent off to nearby concentration camps to be killed.

After the end of World War II Podgorze underwent a complete change of character. The 1950s and 60s saw the expansion of old Podgorze, while in the 1970s towering apartment blocks began to rise in the suburbs of the neighbourhood, creating new districts at the edges of the city that are still expanding today. After 1991, Krakow's districts were reorganized, and today Podgorze incorporates parts of other neighbourhoods, though it's generally seen as the area across the river from Kazimierz. Now we invite you to get to know the district better, and there's no better way to do it than on your own two feet... 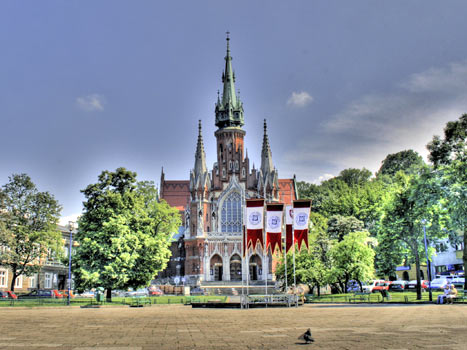 Above: The facade of the Church of St. Joseph dominates the main square of Podgorze.

The best way to get to Podgorze to start your tour is by following Starowislna in Kazimierz to the Powstancow Slaskich Bridge. (Side note: before you get started on your grand tour of Podgorze, we recommend getting side-tracked on Starowislna, as on the right side of the street you'll find what's informally the best ice cream in Krakow. Granted, it's only marked by an ordinary sign reading "Lody" ("Ice Cream"), but you'll know it's the right one when in summer there's a 50 metre queue out front; trust us, it's worth the wait.)

Once you cross the Powstancow Slaskich Bridge, you're officially in Podgorze. Directly on your right you'll find the recently unveiled Plac Bohaterow Getta (Ghetto Heroes Square), with its daunting monument of large metal chairs. The monument commemorates the heroes of the ghetto and remembers the victims of the Nazi Holocaust, as it was the very place many waited to board the trains that would take them to their end in Auschwitz and Birkenau. They were told to take all of their belongings, though in the chaos that began with the coming of the train, their belongings were left behind, including piles of furniture. On the square you'll find the Pharmacy Under the Eagles, a pharmacy during the war whose owner, Tadeusz Pankiewicz, helped thousands of Jews in the ghetto. The pharmacy is now a museum which portrays ghetto life.

More signs of the Jewish ghetto can be found by crossing the underpass and following ul. Kaciz, which turns into ul. Lipowa, on which you'll find Oskar Schindler's factory. On nearby Lwowska Street stands the only remaining part of the ghetto wall.

If you head back to the Ghetto Heroes Square, you can follow the Vistula street (Podwislna) into the soon-to-be-trendy part of Podgorze - or so we predict. Much like New York City's Williamsburg or London's Camden Town, this once poor and neglected area of Krakow is about to explode. Or so point all the signs. If you follow Podwislna to the end, on the left you'll spot one of the main signs - Drukarnia bar. Rumour has it, when Drukarnia moves to a neighbourhood, it becomes the new "it" spot. That's what happened when it moved to Kazimierz a few years ago, and now that it's crossed the river to Podgorze, we can only expect good things in this area.

After stopping for a brew at Drukarnia, head back away from the river towards the main square of Podgorze, Rynek Podgorski. The square itself is dominated by the beautiful Church of St. Joseph, pictured above. From the Rynek Podgorski, you can follow Parkowa street and admire the historic houses and mansions on the left, or take a side trip into Bednarksi Park on the right. Bednarksi Park is a massive green space reminiscent of Warsaw's Lazienki Park, with plenty of paths to stroll or bike down and benches to relax on, as well as a playground and even a stadium.

If you've still got some energy to spare, a hike up the Krak Mound is well worth the effort. From Bednarski Park, follow Dombowskiego Street to the pedestrian overpass over the highway, from which it's a straight shot to Krak Mound. Krak Mound might be one of Krakow's lesser known mounds, but that doesn't make the view from it any less magical. On a clear day, you can see 360 degrees of Krakow, including a stunning view of Wawel Castle and even the spires of St. Mary's Church in the Market Square. Behind Krak Mound you'll get a good view of the Podgorze Cemetery, which is worth exploring in its own right and is accessible from the mound.

From Krak Mound you can head back into Podgorze proper, and you'll eventually run into Limanowskiego, which turns into Kalwaryjska, the main commerce street of this area. Near Limanowskiego and Rekawka streets, hidden by some trees and by its tiny size, stands the Church of St. Benedict. This pint-sized structure, more of a chapel really, is the smallest church in Krakow and dates back to the turn of the 11th century. Unfortunately, it's rarely open to visitors, but might be worth a look just to see it from the outside.

Back on Kalwaryjska, you'll run into plenty of shops and eateries if your stomach has had enough walking. Or, you can turn down Dlugosza and head towards the river to find a lovely park, which is particularly a blessing if you have little ones; its small football pitch, basketball court, and playground will keep the children occupied for hours.

Following the river is a good way to explore Podgorze without losing your orientation (though frankly, it's hard to get lost anywhere in Krakow), and a riverside walk will take you past the Manggha Centre for Japanese Culture, which is always worth a look. To get back to the Old Town, you can cross either Grundwaldski or Debnicki Bridge, and you'll find yourself right next to Wawel. But we suggest to stay a while an explore Podgorze, before this hidden treasure becomes overrun with fellow explorers.

Loved it here. Less touristy than the old town. My girlfriend has lovely feet and found a fantastic shoe shop... Several hours trying on heels and she bought 5 pairs !!

My favourite part of Krakow ! Love it !

found this very informative. Having been to the city and not having been to this area I look forward to exploring this part of Krakow on my next visit.

The Schindler Museum is now open and is incredible. You need quite a lot of time to go around and really take everything in.

Was amazing to see the Schindler Factory in real life. Really makes you think. It seems they are4 making a big museum there and we were able to see a part of it

very informative, i shall be using the guide info when travelling in krakow later this year, will keep you posted

Podgorze is my new favourite area of Krakow. So much atmosphere and history, and great buildings. Not so many tourists either