Why on earth would anyone want to build a fake hill? And not just one - five of the blighters. Well, Cracovians will assert that building such mounds is in fact a very fine and splendid thing. Indeed, they've been piling them up since pagan times. The first went up way back in the eighth century, and the most recent as late as 1934. And although it may be difficult to know exactly what went on a thousand years back, we do know that the last two were built in good faith by the gallant Cracovians themselves, i.e., they weren't erected at gunpoint. So without further ado, let's have a look at these bumpy delights, which are amongst our favourite places in Krakow. 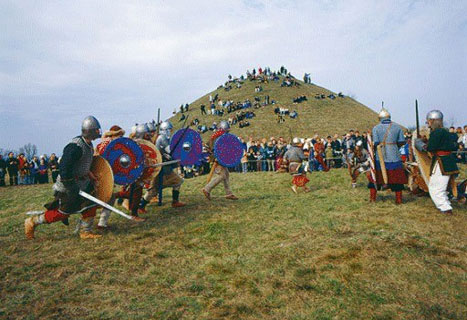 Above: Pagan warriors go berserk at the Krak Mound

As the name suggests, 'The Mound of Prince Krak' was built in honour of the legendary founder of Krakow. So the medieval chroniclers write, and so Cracovians believe until this day. Archaeologists estimate that the Krak Mound was built in the eighth century, some years after the prince did away with the infamous Dragon. The chroniclers insist that Krak was in fact buried in the mound, which commands a princely view over the city. We like this story, but as of yet, no bones have been found on the site, royal or otherwise. However, certain other interesting features were discovered there....

The Wanda Mound was also inspired by a mythical royal figure - Princess Wanda. She was a saintly soul who sacrificed herself for the good of Poland, throwing herself into the Vistula River to avoid the clutches of dastardly German Prince Rydygier. Of all the mounds in Krakow, Wanda's is the most surreal, due to a very simple reason. Until 1948, the mound stood in open countryside on the fringe of the city. Then all of a sudden, the newly empowered Communist Government decided to build an epic social realist city to counter 'bourgeouis Krakow'. Today, the Wanda Mound is next door neighbours with the vast steelworks of Nowa Huta.

Of the five principal mounds, this is the only one that no longer exists. The brutal truth is that it was bulldozed in the 1960's so that a football stadium could be built. The Ester Mound may have been the smallest of the five, but demolition does seem like a rather cruel fate... Legend holds that the mound was built by King Kazimierz the Great in honour of his lover Ester. However, of all the mounds this is the least well-documented.

This hallowed hump boasts a belter of a view over the city and the surrounding countryside. Dedicated to Tadeusz Kosciuszko (1746-1817), hero of both the Polish and American wars of independence, the mound was raised during the brief period when Krakow was a free city (1815-1846) on the brink of Austrian occupation. Earth from battlefields where the general fought was incorporated into the mound, as well as many other heirlooms. It became a sacred place during the Austrian occupation, when the Habsburgs built a fort around the structure.

When Pope John Paul II passed on in 2005, there was talk that a new mound would be raised. However, as of yet, the Pilsudski splendour remains the last of the lot. Jozef Pilsudski (1867-1935) stepped into Kosciuszko's shoes as the battler for Polish independence. His efforts bore palpable fruit, with the reemergence of Poland in the wake of World War II (1918-1939). Construction began in 1934, and as with the Kosciuszko mound, Cracovians themselves did most of the work (you can still see pictures in family albums of chaps in blazers pushing wheel-barrows) . The communists let the mound fall into disrepair, and removed the granite memorial from the top. But during the Solidarity era a major renovation programme was launched.

The old mounds look like bronze age mounds, in my opinion they are not circa 8th C, but in fact remains of the Celtic Boii settlements in the area during the bronze age.

Love the battle!Like Excalibur and King Arthur...! Will be checking those mounds.