Every year on Good Friday a procession takes place at this church that transports the viewer right back to the age of fire and brimstone. On that day, the Brothers of the Archconfraternity of the Passion - decked out in black robes and with black habits covering their faces - prostrate themselves on the marbled floor of this church. The procession has continued unchanged for hundreds of years, and the Brothers still carry staffs that are adorned with rather splendid-looking skulls.

The Franciscan Order arrived in Cracow in 1237. A monastery was founded on this site, and in 1260 work began on a church. Forty years later, King Ladislas the Short made a swashbuckling escape from here in a basket - the city was being bombarded by the dastardly King Wenceslas of Bohemia, who rather liked the idea of adding Cracow to his kingdom. After many skirmishes, the Polish monarch took refuge in the Ojcow valley, where he holed himself up in a cave. The Czechs searched high and low for the escapee, but as legend recounts, a huge spider's web concealed the door of the cave, and this put the hunters off the scent. Six years later, having regrouped his forces, Ladislas made good his return and reconquered Cracow. He left the kingdom stronger than it had ever been, setting the stage for his son, Kazimierz, who continued the job, and was later dubbed 'the Great'. 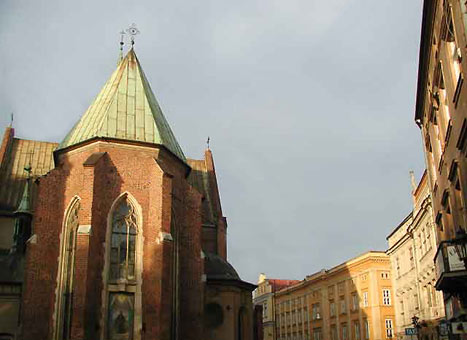 Whilst there is plenty of interesting history behind this church, and not a little myth-making too, it was a disaster, somewhat incongruously, that gave rise to its greatest legacy. In 1850 a fire tore its way through the Old Town, causing major damage to a host of buildings. The Franciscan Church was amongst several that were gutted, and rebuilding had to begin from scratch. This was done in the Gothic style, to mirror the former design, but when this was completed there still remained the question of the interior. The man who eventually rose to the challenge was Stanislaw Wyspianski, and he created one of the most original interiors of the age. He was a genius in the true sense of the word.

Wyspianski was already an established artist when he took up the Franciscan commission in 1897. He was twenty-eight years old, and he was also about to make his mark in the world of drama. However, although he had helped to restore a number of important churches, his original work for Lviv (in Polish Lwow) Cathedral had been rejected on account of its startling modernity. Thus it is something of a miracle that the Franciscans let Wyspianski loose on the entire interior (they did in fact reject some of his motifs for angels, which he wanted to paint as modern day street urchins).

As it was, Wyspianski designed not only the murals that cover the interior of the church, but also the magnificent stained glass windows. The result is extraordinary. The entire interior is ablaze with bright murals - roses and poppies swirl about in blues, greens and yellows, yet all with a wonderfully controlled harmony, much as one finds on looking through a kaleidoscope. The flowers reflect the Franciscan love of nature, yet there are also national motifs here, and you can find the splendid Polish eagle amongst the fray. During this time of partition, when Poland was divided amongst foreign powers, Wyspianski was a typically patriotic artist - he believed in art in the service of the nation, as is also reflected in his dramas.

Amongst the most striking features of the church are the stained glass windows. Bold and visionary, they are a world away from the staid traditions of the medieval era. Most famous is the huge 'Let it Be', which stands above the Western entrance. It shows God emerging from the cosmos in the act of creation. Equally impressive are the series of windows behind the altar-piece, particularly that of the Blessed Salomea (d.1268), who was the wife of the church's founder, Duke Boleslas the Chaste. Like her great nephew, Ladislas the Short, she also had connections with the enchanting Ojcow valley. She finished her days there at Grodzisko, in a convent of her own founding - hence Wyspianski's depiction of her as a Mother Superior. She was canonized in 1673. To the right of the altarpiece is another impressive window, here portraying St. Francis, the patron saint of the church.

Dotted about the main body of the church are some striking knightly sculptures which managed to come through the fire. These were incorporated into the new foundation along with a number of tombs. There are also some fine busts, including one of the great Renaissance poet Jan Kochanowski. Also of note are the side chapels, whose relics are held in great veneration, and these are well worth a look. Heading south through the cloisters one finds some faded medieval frescoes as well as a handful of splendid oil paintings, including that of another Renaissance figure, Bishop Piotr Tomicki, one of Poland's greatest patrons of the arts.

For centuries the Franciscans held the special right of pardon over those under the death sentence. However, in contrast with the radically innovative art of the interior, the church is today notable for its conservatism. The Dominican, on the other hand, which lies just over the road, has a liberal reputation and is popular with students.

The experience of the Franciscan church is naturally at its most spellbinding during the Mass, when the aroma of incense hangs in the air, and the lights do full justice to the brilliance of Wyspianski's designs. The chief chorister, a sterling member of the fairer sex, has a highly uplifting voice that makes a very powerful impact. There are also regular concerts here - and what a fine venue - for this is certainly a church in a million.

Recently I led a group of pilgrims to Auschwitz-Birkenau, which is always a very harrowing but enrichlng experience. I am sad that the candle in Fr Maximilian Kolbe's cell in Block 11 was not lit. I shall be taking abother group there in the summer, and would be so grateful if the candle could be lit, to show the thousands of visitors that there is light even in the deepest darkness. With thanks, Fr Mark

i am asking prayers from cracow franciscans for my husband who is 100%descendant from there , john and our daughter 12 who has lost interest in good learning please thank you, pat