Largely thanks to its term behind the Iron Curtain, Poland is often perceived as an overwhelmingly grey country where rainbows fear to tread. But the truth is that Poles have always loved colour, and at no point in the year is this more apparent than at Easter - an inspirational time to travel the country.

In the days leading up to Holy Week, Cracow's Main Market Square will pullulate with dozens of stalls selling curious-looking totems. These paganesque concoctions, woven from dyed wildflowers, are in fact Polish versions of the Easter Palm (tropical palms were rather scarce in medieval Poland, and always full of fantasy, the Poles created their own alternative). On Palm Sunday itself, processions will bring a kaleidoscope of colour to churches across the country.

Another classic feature of the Polish Easter is the painted egg, or rather painted eggs, for as with flowers, Poles like to see lots of colour together. These 'pisanki' are an essential part of the Polish Easter table, and on Holy Saturday, families dressed in their Sunday best will take little baskets to be blessed at church, replete with pisanki and many traditional Easter victuals. 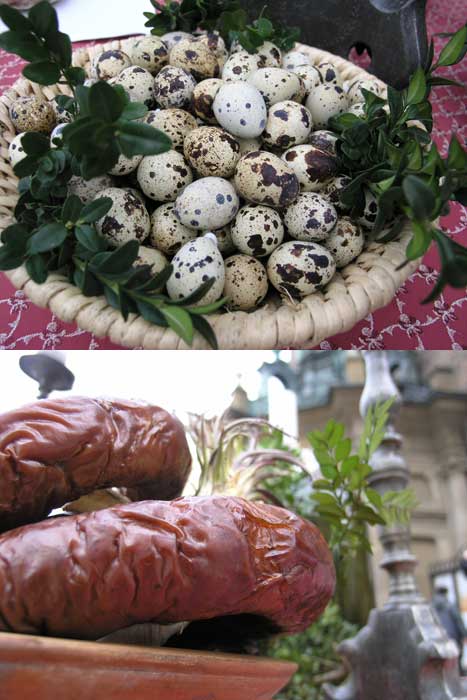 Holy Week begins in earnest on Easter Thursday, and at Cracow's Wawel Cathedral (as at cathredrals nationwide) bishops wash the feet of twelve elderly men in an echo of Christ's gesture towards the apostles at the Last Supper. The following day, Good Friday, is one of the most intensely religious days of the year, and Krakow's churches will fill up with the faithful. The tone is deeply mournful, recalling Christ's crucifixion on this day.

Easter Saturday is a more cheery occasion, and from mid-morning, as mentioned earlier, there will be a constant trail of families coming to and from Cracow's many churches. This blessing of the little baskets of victuals, a custom known as 'swiecone' (literally 'blessed') has been practised since time immemorial. A typical basket includes eggs, salt, cake, sausage and bread, but there will also be painted eggs and always a small model of a lamb. Not wanting to leave their pets out, children often bring a little something extra - you might even spot a little packet of Whiskas peeping out from some baskets.

Easter Sunday itself revolves around the home, and food that was blessed in church the previous day is consumed in an elaborate extended family breakfast, often involving a dash of alcohol. Cracow itself will be rather sleepy, and as with Saturday, there will be little open in the way of shops, let alone museums. However, in recent times, restaurants and cafes have started to creep open, so travellers won't be entirely left in the lurch.

Things go rather more upbeat on Easter Monday as the age-old custom of Smigus Dyngus comes into play. In an echo of a pagan rite, Poles have carte blanche to soak each other with pails of water on this barmy occasion - you might want to take a water pistol as a cunning self-defense measure. On a different note, a popular family destination is the Emaus fair, which continues to be held, as it has been for centuries, by the Convent in the Zwierzyniec district. It's a short walk west along the river from Wawel Castle. However, bear in mind that you may encounter some mischievous fellows intent on greeting you in the traditional aquatic style.

On Tuesday, life begins to return to normal - shops, offices and museums will be back in business. Some schools have one last day of freedom, and if so, many children will head for Kopiec Krakusa (The Mound of Krak) legendary burial mound of the city's founder. The traditional fair, known as 'Rekawka', has been revived of late, and there are often sword-fighting antics (by professional medieval knights of course) and various forms of pagan revelry. For a glimpse of the Rekawka of yesteryear, and indeed into the world of Polish Easter customs in general, head for the Cracow's marvellous Ethnographic museum, which has many charming old photographs, as well as pisanki galore.

Meanwhile if you're a man or woman of action, and fancy coming to Krakow for Easter - it's better than just reading about it - then visit our page on Easter breaks...

Im planning on meeting my girlfriend and her children Easter Monday and after reading this I cant wait!! She always says what a wonderful place it is and I cant wait to join her. Thanks for the information.

This page was very informative and very interesting. My family came from a town near Krackow, and I have been wanting to learn more about the customs and people of this region. Easter time was a special and happy time when I was growing up; and I want to get as much info about it as I can. Judi Waterbury, CT USA

why do polish people find Easter so important ????!

My Wife and I ,have visited Krakow for the past 3 easters,it's absolutely fabulous.We are going next Easter 2011,it is without doubt the best place to be at Easter.

Does anyone know what time masses are at the shrine of Divine Mercy?

I think Easter in Krakow would be slightly cooler than Easter in Warsaw. http://polishmeknob.blogspot.com/2010/04/holy-week-and-wielkanoc.html

Looking forward to spending some time in Krakow over Easter. Sounds great!

Krakow is lovely at Easter. I highly recommend it! So much to see and do....

I returned from Krakow and visited Wawel while I was there. The church was wonderful and the entire city is great. I would love to return for Easter and take it all in again.

Easter in Krakow - for those thinking of visiting Krakow around Easter, I was there last year, arriving mid-afternoon on Saturday. Everything was closing quickly, including all the Wawel Hill places. I realized the only way I'd get to see the Cathedral was to attend the Easter Vigil service from 6-9 pm. I grew up Catholic during the Latin days, but nothing prepared me for 3 hours of Polish chanting! Experience of a lifetime! Get there early!

Susanne, for sure everything will be closed on Easter Sunday, but on the other days most bigger shops, and definitely all the restaurants and bars in the Old Town should be open. Also, if you're looking for a place to stay I recommend Krakow Apartments!

Hi! Thanks for a great webbsite! I´m planning a trip to Krakow this easter, friday to monday, and you described the town as sleepy these days, We are not churchgoers, but not heave shoppers either. Do you think we will be dissappointed if we travel to krakow in easter and everything is closes? Or are for exampel the castle and boattrips open? Would be great if you hade the time to answer! Best regards from Sweden

Hi John! There will be plenty of services on Sunday morning. They'll be packed and certainly inspiring. 'Resurekcja' is the logical name of those Sunday morning masses (some are even held Saturday evening). You could try Wawel Cathedral itself, but really, all of the churches in town will have a special atmosphere over the coming days, so you can take your pick. Not sure if you'll have time but try and pop into a church on Saturday/midday/ afternoon to see the blessing of victuals known as 'Swiecone'.Something unique to this part of the world! All best!

I'm going to Krakow as a solo traveler this Saturday through Tuesday. I've heard the city is just beautiful during easter and would love to attend Sunday services somewhere. Does anyone have any suggestions?

I like Krakow a lot! I was there last spring and tomorrow I am going to go to Krakow spend Easter!