Yes, against all the odds, Poland and Ukraine will be hosting the European Football Championships in 2012! After the announcement by UEFA chief Michel Platini in Cardiff on 18th April 2007 that the two countries will be hosting the tournament, winning out over more favoured bids by Italy and Croatia/Hungary, widespread jubilation has spread throughout the two Eastern European countries.

The action will be spread over six cities in Poland: Warsaw, Gdansk, Poznan, Wroclaw, Chorzow and Krakow; and four cities in Ukraine: Kiev, Lviv, Dnipropetrovsk and Donetsk. Kiev's Olympic Stadium, which hosted the football at the 1980 Moscow Olympics, is the proposed venue for the final. 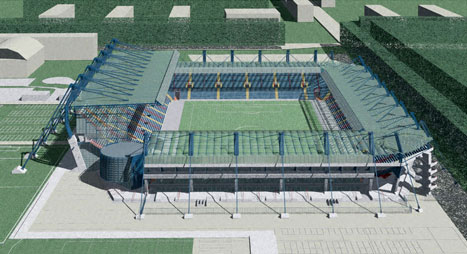 Above: The planned renovation of the Wisla Stadium in Krakow, which currently seats 33,000 fans, is expected to be finished in 2010.

While Krakow was only chosen as a reserve venue, not as one of the main match hosts, there's still a good chance at least one match will take place here. Regardless, Krakow is sure to see some of the infrastructure money allocated by the Polish government and the EU going into the city, from improving roads and railways that will make getting to Krakow much faster and easier, to renovating the city's stadiums.

Be sure to stay tuned to Cracow Life as the 2012 European Championships approach, for updates on the status of matches in Krakow, as well as schedules for matches in other Polish and Ukrainian cities. If you can't wait for 2012 however then check out all the latest news and views on Euro 2008 in Austria, courtesy of our colleagues in Vienna. See you at the game!

Pretty crazy here in Cracow right now. Our offices are next door to Hotel Stary - where the England team are staying. Big crowds each time the team get on and off the bus! Shame there are no matches being held in the city. 25,000 people pitched up today just to watch the Dutch training!

Try the Art Mont not far from the rynek glowny (market square). Reasonably priced. Ideal location. Why people pay a fortune for hotels when we have this little gem. Just google Art mont-they have a website.

I tried to make a reservation in nearby hotels, but everything is overbooked for Euro! Desperatly looking for a hotel/hostel in the centre. I found a hotel near the river - Hotel Forum - is it open? Cause I can't find any info about rooms, only about gokarts or laser paintball there.

Apparently there will be a tented camp for fans built on the Blonia in Krakow. Will believe it when I see it!

The England Team will be training at the Hutnik Krakow Stadium. There is a newly opened, modern 4*hotel next to him (only 500m from the stadium). I can recommend it! :)

The England team will be based in Krakow during Euro 2012 - staying at Hotel Stary right next to our Cracow Life office! There are just a few rooms available in some local hotels, so book fast if you want to be here during the competition! Just fill in teh booking enquiry form on this page (on the right) and someone will get back to you with suggestions whilst rooms are still available!

I don't care about this stadium! Does any one know that they are burning stray animals alive to make way for the upcoming soccer match??? It is shocking, barbaric and APPALLING!!!! I am disgusted!

it is a nice stadium

It hardly seems fair that France have been awarded their third UEFA European Championships while there are other countries still waiting to host their first. Anyway, here's the full history of the Euros from 1960 to 2012 showing the progress made by all participating countries... http://www.myfootba llfacts.com/European FootballChampionship sFinals1960to2008.ht ml

Looking forward to the big showdown in Poland, 2012!

krakow deserve a better football stadium then that .. and why is the best city in poland a reserve city to host a euro 2012 football match .. strange planning .. come on polska wake up !!

Krakow has some of the best stadiums and the infrastructure in the country - why is it only a reserve city? Plus, it has more hotels than any of the other cities other than Warsaw, so it's ready to handle such a large amount of tourists. I really hope Krakow gets at least a match after all.