Maiden-chomping dragons, enchanted pigeons, sorcerers who fly about on giant cockerels - Cracow is not short of the odd legend or two. And every summer, one of the most peculiar of them all springs to life in Cracow's Old Town.... Lajkonik.

At the centre of the Lajkonik custom is a strange looking rider. He's been around for many moons now. With his wizard's hat, shimmering oriental clothes and Rasputin-like beard, he looks like a fugitive from a nineteenth century circus. Once every year, this exotic figure gallops onto the Market Square to meet the Mayor. (Actually, he doesn't really gallop, he comes Monty Python style like the prancing King Arthur in 'The Holy Grail').

On the way to the clock tower, the eccentric rider will rap people with his mace - a sign of good luck for the battered - and he'll be sure to take 'ransoms' from various shopkeepers too. Fond of the finer things in life, he often stops at liquor and food stores. The possibility that he will be sloshed by the time he meets the Mayor is not ruled out. The same goes for his eccentric band of musicians, who assist in procuring those crucial beverages. 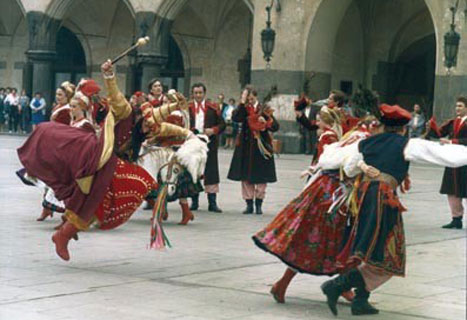 Where does this peculiar character hail from? Well, the Lajkonik story stretches all the way back to medieval times, when the Mongol was Poland's foremost bogey-man. During those days, Tartar hordes sacked Cracow many times, but Genghis Khan did not always get his way....

One particular summer, a crew of gallant raftsmen got word of an approaching band of raiders. They rooted out the enemy camp in the depths of the forest, and when night fell, pounced. Once the Tatars had fled, or, one presumes, met a rather sticky end at the hands of the raftsmen, the victors returned to Cracow, laden with booty. The most valiant raftsman dressed himself up in the rich clothes of the Tatar general, and the heroes entered Cracow to the rapturous applause of the townsfolk.

Thus Lajkonik was born, and the parade has been enacted for several centuries now. As always, the potty parade will commence some time in mid-summer in Zwierzyniec, at the imposing Norbertine Convent (ten minutes walk west along the river from Wawel Castle). From there, Lajkonik and his merry men will prance their way to the Market Square (along Kosciuszki, Zwierzyniecka and Franciszkanska streets).

When they finally meet the Mayor, Lajkonik will raise one more toast, by this stage rather giddily. A number of venerable figures will then make some stirring pronouncements about the city - Cracow has been saved once more!

We saw the "Lajkonik" when we were in Krakow a couple of weeks ago and were somewhat bemused...! Thank you for explaining what it was all about!

I believe that the Lajkonik festival is on Thursday 18th of June 2009. This will be my 1st year to see it and I can't wait. What I want to know is what time does it usually start from the convent at? And how long does it last?

Have you got dates for this year's event

i have aquired a lajkonik figure/doll, it seems intact but the mace is missing, is this bad luck??? my boyfriend is convinced its cursed but thats probably due to the dolls scary appearance, be grateful if you could help us out

this is such a cool, informative website!keep doin' what you're doin'.