The Prince, the Pigeons and a Putrid Hag

Long, long ago, there lived a king called Boleslas, and he was known as 'The Wrymouth'. He was a clever man, but in his old age he made one fatal mistake. He resolved to divide his kingdom between his five sons. And so it happened. Poland - once a great country - was split into five pieces. And in time, the five sons passed their lands to their own sons, and they in turn to their sons. As it was, generations were to pass, and not one was bold enough to reunite the old kingdom.

Then one day, a Prince of Krakow named Henryk Probius steeled himself for this great task. It was, to be sure, no easy venture. And in winning the support of the other kingdoms, the Prince would have to spend a great deal of money. What is more, he would have to make a journey to Rome to gain the approval of the Pope himself. Yet the treasury in Krakow was almost empty! There was no way that he could afford such a journey. What was he to do? And so with great energy he set about winning the support of the local merchants and nobles.

'How glorious it will be' he would cry, 'Poland shall be born again! Who knows what glories and triumphs await us!'

It was indeed a great plan, but somehow, the nobles were reluctant to gamble their money on such a venture, and after a year had passed the Prince was still no better off than he had been before.

Down the length and breadth of the kingdom he travelled and still no luck was to come his way. He became terribly unhappy. Why did nobody rally to his calls? 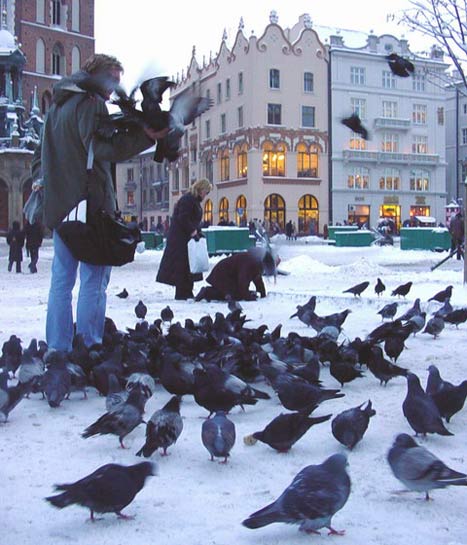 The Prince had just about given up all hope when one of his faithful knights brought news of one final place that he might try. As many people in Krakow knew, there was an old witch who lived in the wilds beyond the city - perhaps she could help him in his task?

Yet this hag had such a foul reputation that none would dare go out in search of her. But the Prince, determined to try anything, would not be put off by such stories, and off he went on his own.

It was a treacherous journey to be sure, and foul marshes beset the Prince at every turn. Night fell and still he had not found the witch. And such strange noises one hears at night - from where could such terrible croaks and screeches come? But he was a brave Prince and he would not turn back.

Then, pulling aside some ferns, he came upon a clearing. There in the centre was a hut. Taking a deep breath, he strode up to the door and entered.

There, lit up by the flames of her gurgling cauldron was the terrible witch. She was throwing all manner of disgusting things into the brew and at first she appeared not to notice him. 'What a foul woman indeed' he thought, and nearly placed his handkerchief over his nose in disgust. But he was a brave Prince and he would not be shaken by such a strumpet.

Clearing his throat, he quickly explained to her his problem. She did not need much time to come to her decision� indeed she would come to his aid and see that he travelled to Rome with all the splendour that was due a mighty prince. Yet this would only be granted if he agreed to her terms. His trusted knights must not accompany him on his quest, they would remain transformed into pigeons until his return to Krakow.

What on earth was he to do? After pacing back and forth for a moment, deep in thought, he resolved to accept her harsh terms.

The next morning the witch appeared in the great Market Square where the Prince had agreed to meet her. With a sharp glance and a swift gesture of her arm the knights were indeed transformed into pigeons. Up they flew onto the roof of St. Mary's church. And as they settled there, they dislodged a great shower of little stones. As each stone hit the ground it bounced up and turned into a spinning coin of brilliant gold.

Soon the whole square shimmered with this fabulous treasure. It was a marvelous sight and before long the townsfolk had filled many baskets to the brim. The Prince was ecstatic and the people of Krakow saw him off with a tremendous fanfare. And thus it appeared that fortune was smiling on our Prince. Yet things rarely turn out as one might expect. And true enough, he became so giddy at his new found wealth that he splashed it about in a most unwise manner. At every town on his journey he frivolled it away on banquets and balls (and not a few beautiful maidens).

By the time that he realized the error of his ways it was too late. He was so penniless that he never even made it to the Italian border. Full of shame the Prince returned to Krakow. How foolish he had been.

And what of his trusted knights, one might ask? He searched far and wide for the hag but much as he might try he never could find her. Worse still, all attempts to remove the spell from the knights were to no avail. The merchants quipped how wise they had been not to lend their money to this hapless fellow. Thus the Prince had to live out his days a very unhappy man, forever searching for the strange witch of the marshes.

And so it was that Poland remained divided until the reign of King Casimir the Great in 1333. But all the while the pigeons have lived on, and this is why the Krakovians treat them with such respect. They are indeed no ordinary birds but the enchanted knights of Henryk Probius, still full of hope and awaiting the arrival of their Prince with the crown of a King.

I really liked the way you made it sound! I knew this legend for a long time, but it never was this interesting for me :))

Very interesting... Is there any movie based on the story?? Name?

that was a great read, legends can really add to the atmosphere of a place

....Grandmother herd whispers of this woman being a witch. When my grandparents caught her stealing, my grandmother called her a witch, and probably from the woman's perspective, she felt insulted and humiliated but she left. after about a week my grandmother got what looked like a mole on her neck. After a few more days she got sick and the mole kept growing. eventually she got better but my grandmother ever since had a scar where the mole once was. And they believed the woman was infact a vengeful witch that had cursed them. and everytime I visit my dear Polska something unfortunate always happens to me. So who knows, maybe she was a witch.

both of my parents are from poland. My father is from a town not far from Kielce. 20km away are the ?wi?tokrzyskie Mountains, hom of ?ysa Góra, a place that locals believe to be the metting grounds for witches on their sabbaths. My mother's home town is Krakow, the old capital city. Surprisingly enough, I've never herd this myth about its pigeons. It wouldn't surprise me if some of our legends are true. My mother's mother use to tell me stories like this when I was little. One of her stories, I later came to find, was no story but something that my grandmother lived. (might I add, the part of my mother's city where she grew up is one of the oldest parts of the city called Podgórze.) When my mother and her 2 sisters were young both of her parents worked. As a result there was a woman that took care of my mother and her sisters during the day. She seemed nice enough.(I almost forgot, this was sometime during the 60's) Eventualy things in the house went missing. my grandparents thought nothing of it........

Nice legend, I will travel to Krakow and I will tell it to my traveling friends

What a wonderful story. I am currently living in Poland and love hearing the legends. We often visited Krakow and each new story enhances our visits! Thank you. Christine

That legend was great! Please more legends about Cracow!