Latin languages, easy-peasy; Saxon languages, none-too-taxing; Slavic languages, tricky; Finno-ugric languages... next to impossible! Ok, there's no need to be defeatist, learning Hungarian isn't that hard, but as one of only three European languages that don't originate from Indo-European (the other two being Finnish and Estonian) Magyar will certainly deliver a few surprises even to the most experienced linguist. Aside from the complications of a fair few extra letters to contend with, the large number of suffixes and prefixes and almost completely flexible word order can disorientate the newcomer. On the plus side there are no genders to deal with, pronunciation shouldn't present too many major dramas, and it turns out that the flexible word order does have its advantages after all... Surely approve Yoda would. 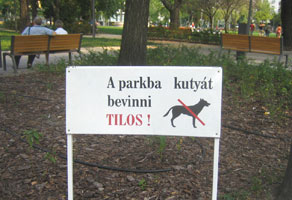 For those of you who are easily amused you'll be delighted by one of your first discoveries about the Hungarian language... the word 'Szia', pronounced 'See ya', means hello, whilst 'hello' is very frequently used to mean 'goodbye'. Don't underestimate the fun you can have with this one! Plus try these phrases on for size... Nem ?rtek - I don't understand
Tilos a doh?nyz?s - Smoking is forbidden
Hol lehet jegyet v?ltani? - Where can I buy tickets?
Jegy - Ticket
V?z - Water
S?r - Beer
Bor - Wine
M?zeum - Museum
Posta - Post Office
Tudna seg?teni? - Could you help me?
Besz?l maga angolul? - Do you speak English?

Hungarian, or Magyar as it is called by native speakers, is spoken by around fifteen million people, ten million of whom live in modern day Hungary with the majority of the rest living in neighbouring countries which were once part of the Austro-Hungarian Empire. This guide is unlikely to make you the fifteen million and oneth Hungarian speaker but hopefully it will help you get a shoe in when it comes to everyday situations like ordering food in shops and restaurants. If you're hell bent on reading Miklos Banffy in his native language then check out our services section for some schools who can help.