Toe-numbingly cold in winter and skin-blisteringly hot in summer, don't come to Budapest without taking proper account of the weather. You'll find a…

Above: Take off with Malev airlines Centre: Train it in from Krakow Below: Or rely on some trusty horse powerBy air Budapest is easily…

Above: Scoot around town Centre: Festival-goers await the HEV Below: These SUVs really clog up the roadBy public transport Budapest has…

The days when a credit card in Budapest was about as much use to you as alka seltzer in Algiers are long gone. Most half-decent shops, restaurants…

Budapest began life as a Celtic settlement before the Romans founded the town of Aquincum on the same site towards the end of the 1st Century AD. It… 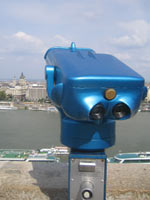 Above: Scope out the Hungarian Parliament Below: Count Istvn Szechenyi - the Greatest Hungarian. 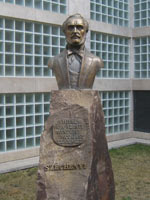 "There is such a constant variety and movement in the streets, such a blending of the Oriental with the European and such a holiday look about the whole population that it is impossible to feel ennui in the chief city of the Magyars." So wrote Julia Pardoe in 1840, and she was certainly right in saying that one could spend many weeks exploring Budapest without tiring of her charms...

If, unlike Julia, you're not blessed with the job of travel writer and have only a few days for sightseeing then you'll want to prioritise your time to take in the key attractions. A natural place to start your exploration is on the hilly outcrops of Buda, where visitors can marvel at the Royal Palace and from this high vantage point enjoy views of the Danube and Pest sprawling below. An afternoon walking around the peaceful avenues that criss-cross the castle district is time well spent indeed, and as you lose yourself in this peaceful oasis it's hard to imagine you're in a city of 2 million people.

Take a walk across the Chain Bridge however, at the foot of Buda Hill, and you'll find yourself in an entirely different metropolis - the bustling, beguiling Pest-side. The flavour and attractions of a big city are all packed into this energetic side of the river, and yet somehow a laidback vibe prevails - it seems the locals always have time for a coffee or beer in the hundreds of charming cafes and outdoor gardens (known in Budapest as 'kertek').


Essential sightseeing in Pest includes of course the stunning Budapest Parliament, the second largest in Europe, whilst St. Stephen's Basilica majestically holds court over one of the town's most famous squares.

Just east of the Basilica is the start of Budapest's most impressive street. Dubbed the Hungarian 'Champs D'Elysee', Andrassy Utca is a commanding boulevard fitting of such a grand capital. Look to your left for Miklos Ybl's wonderful Opera House, and a little further up on the right find Lizst Ferenc Square, where some of Budapest's best bars and cafes hold court.

Those who don't give into the temptation of a pint at Incognito, and continue up the Andrassy Boulevard will discover the magnificent Heroes' Square, where towering columns and statues celebrate Hungary's greatest men. If you've still got the legs for it you can round off your tour with a stroll in the adjacent City Park, where you'll also find the popular Szechenyi Baths.

By now you can claim to have seen Budapest's most famous tourist attractions, but there's certainly plenty more to discover. The Arcadian islands on the Danube, the scores of fascinating museums, of course the unique vibes of the Budapest nightlife... (get ready for a really bad pun...) are all certain to leave you Hungary for more. Last time we promise!

This is very useful for a tourist, great effort. I just went there last month and blogged this subjective and non very touristic version of a guide, it might also be useful and interesting : www.surfingtheflow.wordpress.com/2012/07/28/budapest-hungary-a-subjective-and-non-very-touristic-guide/

It's an incredible city.