Budapest began life as a Celtic settlement before the Romans founded the town of Aquincum on the same site towards the end of the 1st Century AD. It wasn't until the 10th Century that the Magyar (Hungarian) people arrived in the region from the East, and not until the year 1000 itself that King Stephen established the Kingdom of Hungary with Pope Silvester II's blessing. Even at this time the then separate towns of Buda and Pest were of little importance as the Stephen's palace was situated in Szekesfehervar and the country's religious centre in Esztergom. After the Mongol invasion of 1241 ravaged the country King Bela made the decision to build a number of fortresses to better protect the country from invaders. The castle on Buda Hill was one such fortress, and this stronghold later allowed Buda to become the Hungarian capital (in 1367).

In the following years Budapest's fortunes ebbed and flowed with that of Hungary's, enjoying a golden age under Matyas Corvinus, but being sacked in 1526 by the Turks (Ottomans) who then returned in 1541 to occupy the city. The Ottomans were eventually ousted by the Austrians in 1686, who tried to rule Hungary by force. During the next two centuries there were several unsuccessful bids for Hungarian independence (as well as periods of peace and prosperity - Count Istvan Szechenyi oversaw the building of the Chain Bridge, opened in 1849, which was the first permanent structure to finally link Buda and Pest together), before the Austrians sought to mollify the Hungarians by granting them their own parliament in 1867 in what became known as the Dual Monarchy of the Austro-Hungarian Empire.

Modern history has seen Budapest the centre of the storm on more than one occasion, most notably in the Siege of Budapest, when the Nazi Occupiers fought bitterly to stop the advance of the Red Army, and then in the 1956 Revolution when the Hungarian people rose up against their Soviet masters - only to be brutally crushed. Of course, the Iron Curtain collapsed in 1989 and Budapest has been a decidedly brighter place since then. Hungary's dynamic capital has taken well to Western ideas, without sacrificing its soul along the way. Global companies and Western brands might be visible on every corner, but Budapest remains a laid-back, relaxing city content with what it's got and to develop at its own pace. 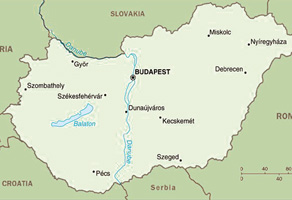 Hungary was officially founded on Christmas Day in the year 1000, when King Stephen was crowned and pronounced ruler of the Hungarian state. Despite the Mongol invasion of the 13th century, which cut the population in half, the state grew in status through the Middle Ages and enjoyed a period of Renaissance culture under King Corvinus in the 15th Century.

When the Turks seized Budapest in 1541, afterwards the country was divided into three states. Budapest and the surrounding land came underneath the direct rule of the Ottoman Turks, whilst Transylvania (previously part of Hungary) became an independent principality, loyal to the Ottomans. The rest continued to be ruled by Hungarian nobility, under the auspices of the Habsburgs.

As the Habsburg-led Austrians became the dominant force in the region, the Turks were ousted and the Kingdom of Hungary reestablished in the 18th Century. However, it wasn't until the 19th Century that the Austrians conceded Hungary it's own parliament and the Austro-Hungarian Empire was born. This era came to an end with the onset of World War I. Indeed 'the Great War' saw the demise of four empires, the Russian, the Ottoman, the German and the Austro-Hungarian, and it also contributed to the demise of the British Empire.

The interwar period saw Hungary establish itself as an autonomous republic. However, finding herself on the losing side of WWI, the country was stripped of two thirds of its territory. Bitterness at this loss at least partially influenced Hungary's decision to enter World War II on the German side. That said, when the Germans looked to be losing the war leftists tried to negotiate a separate peace treaty with the allies, causing the Nazis to invade and occupy Hungary in 1944.

The Red Army would liberate the country shortly after in 1945, although freedom from the Nazis came at a price. With Soviet help, leader of the Communist party Mtys Rkosi established Stalinist rule in Hungary, and his mismanagement of the economy saw living standards fall. His increasing unpopularity allowed Imre Nagy to come to power (following Stalin's death in 1953). Nagy's attempts to promote a new form of Socialism in Hungary didn't go down well in Moscow and he was forced out of power in 1955. However during the 1956 Uprising Nagy was appointed prime minister by popular demand, and he announced to the world on November 1st of that year that Hungary was leaving the Warsaw Pact and asked the UN to recognize Hungary as a neutral country. Fearing that if Hungary broke away, more satellite states would follow, Soviet recriminations were unexpectedly swift and brutal. 2,500 were left dead and up to 20,000 were arrested after the struggle. Around four hundred of those were executed - including Nagy.

Hungary remained behind the Iron Curtain until 1989, although so-called 'Goulash Communism' in the 1970s and strong moves towards democracy in the late 80s meant Hungary was better off than many of its neighbours. After an initially tough transition to a full market economy, Hungary is now experiencing buoyant times with foreign investment running into the billions and the general standard of living drastically improving. Accession into the EU in 2004 was confirmation of Hungary's status as a modern European country, which is becoming increasingly attractive not just to investors but to tourists too.