Tarmac shimmering in the Hungarian sun, the powerful roar of ten cylinder engines reverberating in your ears, colourful flags of every nationality waving trackside, cute girls in sponsored jumpsuits smiling for the cameras and Fleetwood Mac's 'The Chain' on repeat play in your mind. The Hungarian Grand Prix returns for another year!

It all started way back in 1936 when drivers from Italy, Germany and Britain gathered at Nepliget Park in Budapest to do battle in Masseratis, Alfa Romeos and Mercedes's on a five kilometre track. Fifty laps later and Tazio Giorgio Nuvolari (aka 'The Flying Mantuan) claimed first place on the podium in his Alfa Romeo... Hungary's love of the Grand Prix was established. 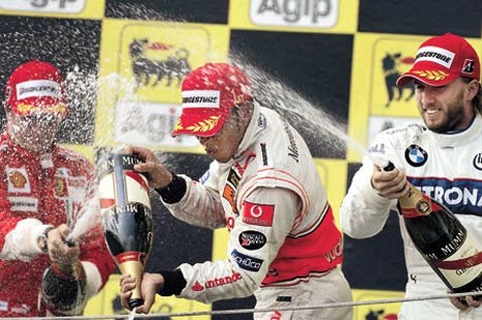 Above: Lewis Hamilton celebrates victory in the Hungarian Grand Prix 2007

Politics, the outbreak of World War II in 1939 and the rise of Communism meant that it was fifty years until the Grand Prix returned to Hungary. It was 1986 and the Iron Curtain was still drawn over Central and Eastern Europe, but Bernie Ecclestone had a dream to hold a Formula 1 race in the USSR. However, he was persuaded by a friend to opt for Budapest instead and with permission from the Hungarian authorities a course was built in record time in a valley outside the city called Hungaroring. The 4.83 kilometre track is the second slowest on the F1 circuit (Monaco being the slowest) and is considered by many drivers as too demanding thanks to the large number of turns, the dustiness of the track, the heat (the Hungarian Grand Prix is held in August, when Budapest is at its hottest) and the difficulty of overtaking. However, many of Formula One's most celebrated legends claimed to love the track, including Ayrton Senna, Michael Schumacher, Fernando Alonso and Nigel Mansell, the latter of whom not only was crowned World Champion here in 1992 (his fifth position meant that he wrapped enough points to win the title early in the season), but also has a curve of the Hungaroring track named after him.

Indeed, in the twenty odd years that have passed since its reintroduction to the Formula 1 circuit, the Hungarian Grand Prix has seen some great events and rivalries played out. Nelson Piquet, Ayrton Senna and Nigel Mansell battled in the late eighties for supremacy with Piquet winning the honours in 1986 and 1987, and fellow Brazilian Senna claiming victory in 1988. It was Nigel Mansell's 1989 performance that had the F1 pundits in rapture however - he won the race despite starting twelfth on the grid. Mansell is not the only Brit to enjoy success here, with Damon Hill winning twice, Jensen Button claiming first in 2006 (from 14th on the grid, breaking Mansell's record) and rising star Lewis Hamilton popping open the champagne in 2007. No prizes though for guessing that Michael Schumacher is the most successful driver at the Hungarian Grand Prix, claiming four first place finishes, the first in 1994 the last in 2004.

Tickets for the Grand Prix don't come cheap - even in Hungary, and a standard general admission ticket for the weekend will set you back 90 Euros. If you want a place in the grandstands then you can choose from a Bronze ticket costing 139 Euros or splash out for a Super Gold ticket for 360 Euros where you'll not only enjoy the best views but some shelter from the mid-summer swelter. Giant TV screens are visible from all of the Grandstands, whereas the hills of Hungaroring mean that even the paupers with general admission tickets get a decent view - especially if they arrive early. Things worth bringing include binoculars (if only for views of the Formula One babes!), sunglasses, suncream, a hat and an umbrella (it rained in 2006!). A packed lunch will also save you a few forints.

Getting from Budapest to Hungaroring

By suburban railway (HEV in Hungarian)

It is relatively easy to reach Hungaroring by public transport. Take the HEV railway from Ors Vezer Square and alight at either Szilasliget or Hungaroring itself, journey time around thirty minutes. The former has a paved walkway to the track, whilst for the latter you will walk over a dusty road.

Ticket holders for the Grand Prix can board a special bus laid on for the purpose. The bus departs from the Pest end of the Arpad Bridge, and takes you to the centre of Mogyorod, the village adjacent to the track.

By car you can get to Mogyorod in twenty minutes on the M3 motorway. You have to buy a permit to drive on the motorway, which you can get at all petrol stations for just a handful of Euros. The drawback of arriving by car is the likelihood heavy traffic jams to and back from the event. If you are determined though check out our services section for car rental.

For more information on the F1 Hungarian Grand Prix check out the official website right here.