Chopin - Master of the Mazurka

So read the official verdict on the pianist's final exams at the Warsaw Conservatory, back in 1829. 200 years after his birth, and the tag of genius remains indelible. "It's often said that there are three composers who never wrote a bad piece of music - Bach, Chopin and Debussy," notes biographer Adam Zamoyski, yet Chopin was also a revolutionary, profoundly altering the course of music.

Although he only lived to the meagre age of 39, chroniclers didn't waste much time in weaving a romantic whirl around the composer's past. According to some, he was hauling himself out of his cot in the middle of the night and tinkling away on the ivories in the moonlight. Later, his striking good looks and dapper style provided plenty of grist to the mill for gossips. His enduring relationship with cross-dressing lady of letters George Sand still keeps tongues wagging, and biographers have cited strings of other affairs, most of them fictitious. Regardless, until this day, Chopin's tomb in Paris's Pere Lachaise cemetery remains a point of pilgrimage that outdoes even Jim Morrison's (a pebble's throw away) in public adulation. 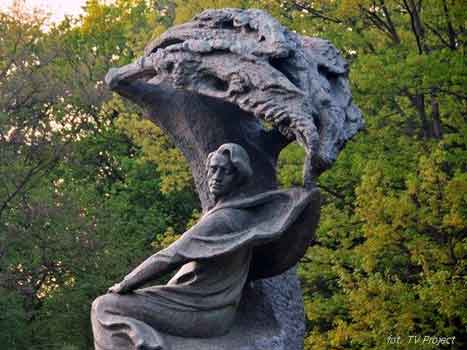 Above: Statue of Chopin in Warsaw's Royal Lazienki Gardens, sculpted by Waclaw Szymanowski

Whilst tales about Chopin composing cantatas on his potty may be dismissed as amusing myths, there can be no denying that he was a child prodigy. Born in the village of Zelazowa Wola near Warsaw on March 1st 1810, the future star grew up in a musical household. His French father, Nicolas, an academic tutor to the aristocratic Skarbek family, played the flute and violin, and his Polish mother Justyna, an impoverished relative of the Skarbeks, taught piano.

When Fryderyk was still a baby, the family moved to Warsaw. Chopin Senior had found a job teaching French at the Warsaw Lyceum, and it was here in the erstwhile Polish capital that the child's career would be launched.

In those days, Warsaw was an elegant city, but very much caught between a rock and a hard place. Although Poland had been a sovereign state for almost 800 years, the country had been wiped from the map at the end of the 18th Century by three eager neighbours - Russia, Austria and Prussia. Although briefly resurrected under Napoleon, Poland was back under foreign domination by the time Chopin was six. Warsaw was a part of the Russian Empire, but during Fryderyk's formative years, the so-called Congress Kingdom of Poland, of which Warsaw was capital, had a fair amount of freedom, albeit fragile, as later events would prove.

Chopin's father was assimilated into the local culture, and Polish was the main language spoken at home. Fryderyk's musical talents were spotted early, and by the age of 8, he was performing in the salons of some of Poland's grandest aristocratic families. A key venue was the so-called Blue Palace, which was rebuilt from scratch - like so much of Warsaw - after World War II.

In 1826, aged 16, Chopin enrolled at the Warsaw Conservatory. His tutor, the distinguished composer Jozef Elsner, was to be a key influence on the young pianist's career. However, Chopin Senior insisted that his talented son continue his academic studies at the same time.

By all accounts Fryderyk was a jovial young fellow with an entertaining talent for mimicry that stayed with him into his adult years. During the holidays, visits to friends' houses in the countryside had a profound impact - his encounters with folk music provided the inspiration for much of his later work. Meanwhile, his unrequited love for a young maiden named Konstancja Gladkowska was echoed in his early compositions.

Whilst completing his studies at the Conservatory, he composed what would be two of the best loved pieces of his career, his pair of piano concertos. Due to embark on an extended tour of Vienna, he played the first to great fanfare in Warsaw on October 11th 1830. It was a farewell concert, but he could not have known the degree to which this really was goodbye. On November 1st, the 20 year-old pianist had a parting dinner with close friends. His proud teacher Elsner had composed a cantata especially for the occasion, which was sung by a small choir as Chopin's coach prepared to depart. He would never return.

Four weeks later, on November 29th, armed struggle broke out between Poles and Russians after unpopular new decrees were passed. All out rebellion ensued. It was a year before the Poles were finally defeated.

Chopin would ultimately make his career in Paris, where he became an inspirational figure amongst the community of Polish exiles. Echoing the romantic tradition, his heart was taken back to Warsaw after his death. It was sealed in an urn within a pillar at the Church of the Holy Cross, where it remains until today. His music continues to delight fans, conquering parts of world where other western composers have made little impact.

We too, of Polish heritaage, are celebrating the 200th anniversayr of Chopin.We will honor him at our Texas Folklife Festival (Polish Booth) and at our annual Gala, held in November. We are looking for large posters or photos to display. Please, let me know where to locate these.