Minsk is not exactly a tourist haven at this point, and you can go entire days without hearing a single word of English (or any other western…

Above: Constant improvements Left: Rail gateway to Minsk Below: All aboard! By air The Minsk National Airport (MSQ / Minsk-2) is currently…

Above: No. 100 - a tourist favourite Left: Taking the metro Below: Bus tickets can be purchased on boardBy metro The metro is by far the…

The state of currency exchange in Belarus can be a bewildering experience for visitors, not to mention Belarusians themselves. With the National Bank…

While there are two official languages in Belarus - Belarusian and Russian - but day-to-day life in Minsk takes place mostly in Russian. If neither…

The first settlers on Minsk soil were Early East Slavs, who arrived in the 9th century. The Svislach River, which runs through present-day Minsk, was… 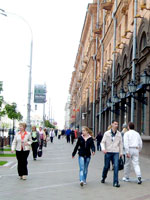 Above: Plenty of room on picturesque Lenina street Below: Bride and groom 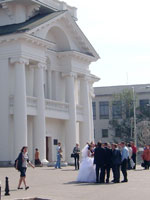 While it may not be the isolated enclave of communist life it once was (after all, it has been technically free from the grip of Russia since 1991), Minsk remains a fascinating city where dramatic Soviet architecture clashes with a quickly approaching westernisation of the day-to-day lifestyle of its urban population.

Minsk's grand avenues, such as its central thoroughfare Nezavisimosti, are lined with posh restaurants serving anything from sushi to tapas, and the nightlife is buzzing at the bars and clubs, which can easily rival those of Minsk's European neighbours. But ultimately, its this contrast of urban modernity and incongruous, almost absurdly serious Soviet surroundings, that makes Minsk a one-of-a-kind destination that you won't soon forget.

Minsk can be a little difficult to negotiate for first-time travellers, but with all the major sights located within reasonable walking distance of one another, all you need is a map and a sense of adventure. And having chosen Minsk as your holiday destination, you've surely got plenty of that already!

If you're arriving in Minsk via rail, you'll have the best introduction to the city right under your nose. Across from the Central Train Station on Prevokzalnaya Square are the iconic twin towers known as the City Gate, welcoming visitors to the city in classic Soviet style.

All roads lead to Nezavisimosti avenue, the eight-lane thoroughfare which extends across the city eastwards. But first, make your way to the picturesque Kirova and Karla Marxa streets which are accessible from Sverdlova street on the south-eastern corner of Independence Square. Karla Marxa street in particular, is a welcome and pretty respite from the somewhat overbearing Stalinist buildings in most of central Minsk. Historic buildings and plenty of greenery line this small street, which is known for its cute cafes and shops. One street over on Kirova you'll find the Minsk Arena, Crowne Plaza hotel, and National History Museum. Turning left from Kirova down Lenina street, you'll pass by the National Art Museum, one of the city's best cultural attractions.

Continue up Lenina, another one of Minsk's lovelier streets continuing the Parisian feel of Karla Marxa with trees and benches along its sidewalks and several first-rate restaurants including the superb Grand Cafe. After a few minutes you'll pass the busy Nemiga street (turn left to see St. Peter and Paul church and Blessed Virgin Mary Archcathedral), and eventually meet the Svoslach river to your right. In the distance is the Sports Palace where you can rent a bike or go go-karting in the summer.

Just across the river is Minsk's tiny Old Town, known as Trinity Suburb as well as the footpath to the Isle of Tears memorial. Cross the Svisloch once again and walk up the short stairs to Upper Town, which leads to the Palace of the Republic. At this point you can join on to Nezavisimosti Ave. once again, passing by the Circus on the right and Yanka Kupala Park on the left, with the Bolshoi Theatre just a few minutes further.

At this point you'll be continuing on Nezavisimosti, crossing the Svisloch at yet another point in its many twists and turns, passing by Gorky Children's Park on the right (you'll see its ferris wheel in the distance). Straight ahead is Victory Square where Minsk starts to take on a more typically Stalinist look, but before you resume your trek up Nezavisimosti take a detour to your left on Kommunisticheskaya Street and take a peek at one of Minsk's more unusual tourist attractions - the former residence of Lee Harvey Oswald.

Finish off your day by jumping on the metro from Victory Square (Ploschad Pobedy station) or taking bus no.100 east on Nezavisimosti to the National Library. Reward yourself with a celebratory drink on top of city at the National Library's 22nd floor cafe. Congratulations - you've just done Minsk!

I'm going on a bikecycle tour from Minsk to Kaunas. Is it possible to rent a bike in Minsk? If yes, where? Thanks a lot in advance for the answer