The first settlers on Minsk soil were Early East Slavs, who arrived in the 9th century. The Svislach River, which runs through present-day Minsk, was a boundary between settlements of two tribes - the Krivichs and the Dregovichs, who by 980 were incorporated into the early medieval Principality of Polotsk (part of the Kievan Rus' polity).

The first mention of the town of Minsk was in 1067, the year now recognized as the founding of the city. The town eventually became part of the Grand Duchy of Lithuania in 1242, which nearly 200 years later was joined with the Kingdom of Poland in union. In 1499 Minsk received its town rights according to Magdeburg Law.

The Polish-Lithuanian Commonwealth was created in 1569, bringing many Polish settlers to Minsk and increasing its importance as a cultural and economic centre. By 1654, Minsk was in Russian hands, and was soon wedged in the Polish-Russian conflict until it was returned to Polish hands in 1667. The town's population had shrunk to 2000, and was further devastated during the Great Northern War through a series of occupations by Sweden and Russia in 1708-9.

As the strength of the Polish-Lithuanian Commonwealth faltered, Russia took control of Minsk as Poland was partitioned in 1793 marking the beginning of serious Russian influence in the city and the decline of Belarusian identity. As a regional capital, Minsk grew rapidly in the 19th century with the creation of its first paved streets, public library, and local newspaper. The city also became an important transportation hub between eastern European cities and grew in economic, cultural, and religious power. By the end of the 19th century, Minsk's population was roughly 100 000.

The First World War made Minsk a battle-front city, with the eventual Treaty of Brest-Litovsk handing Minsk over to German forces in 1918. This was the first chance for independence for Belarus (despite being under German occupation), declaring independence as the Belarusian People's Republic in March 1918 - only to be taken by Soviet forces in December of the same year. The Byelorussian Soviet Socialist Republic was founded, with Minsk at its capital.

By the time World War II hit Minsk, the city had developed into a strong economic and cultural centre as part of the USSR, with a population of 300 000. As Germany occupied Minsk, the Nazis created one of their largest Jewish ghettos in Minsk. The ghetto's 100 000 Jews were allocated 1.5 metres per person, not including children. Because of its important role in the eventual victory of Soviet forces in the area, Minsk was awarded the title of Hero City in 1974. However, the war caused enormous destruction throughout Minsk, leaving 90 per cent of the city in ruins and a tiny population of 50 000.

Following the Great Patriotic War (World War II), Minsk was rebuilt according to Stalin's urban vision with wide avenues and grand buildings, a style which remains prominent even until today. As part of the BSSR, Minsk's population grew rapidly (up to 1 million in 1972) and the city was massively industrialized, as was standard across the USSR.

As the Soviet Union collapsed, Minsk became the capital of the Republic of Belarus in 1991 as well as the administrative centre of CIS (Commonwealth of Independent States) - a network of former USSR nations. Since then, Minsk has been modernized and somewhat westernized, though its distinct Soviet flavour remains - visually, at least. Today, Minsk is the largest city in Belarus and has a population of roughly 2 million. 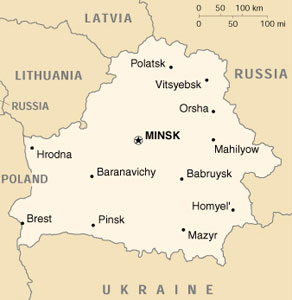 The history of Belarus is a tumultuous one, with a great deal of war, subjugation, tragedy, and relatively little independence. But with its unfortunate location, wedged between the European kingdoms and ever-expanding Russian forces, it seems Belarus was always in the middle of something.

The region now recognized as Belarus was first settled by Slavic tribes in the 6th century, who later joined Scandinavian warriors known as Varangians in creating the 9th century Kievan Rus network of principalities based around the city of Kiev. After the death of their ruler and a 13th century Mongol invasion, the region joined the Grand Duchy of Lithuania.

After the union of the Grand Duchy with the Kingdom of Poland by marriage in 1386, the two eventually joined to create the Polish-Lithuanian Commonwealth in 1569. By this time, Russian forces had already begun attempts to reunite the lands of the former Kievan Rus' which succeeded in 1795 as the Polish-Lithuanian Commonwealth dissolved under the partitioning of Poland, leaving Belarusian lands to Imperial Russia.

It wasn't until the First World War that the German Empire got its hands on the region, giving Belarus its first chance to declare independence in 1918. Almost immediately Belarus was stuck once again in the middle of a war, as Poland fought Soviet Russia dividing Belarusian lands between the two nations yet again.

The eastern, now Russian, portion of Belarus became the Belarusian Socialist Soviet Republic in 1921 and a founding member of the USSR. Nearly 20 years later, as Poland was somewhat distracted by the Second World War unfurling around it, the BSSR marched in and claimed its original western regions.

The most devastating period for modern Belarus followed this brief victory, as Germany invaded the Soviet Union and once again Belarus was caught in the midst of it all. Its lands were destroyed, buildings razed to the ground, and two to three million people killed - not to mention a completely devastated Jewish population.

An intense period of Russification ensued, as Stalin sought to isolate the BSSR for western Europe as the region worked hard to rebuilt after the near complete destruction of the war. And to top it all off the country was severely hit by nuclear fallout from nearby Chernobyl in 1986.

The USSR eventually collapsed, allowing Belarus to finally declare sovereignty in 1990, changing its name to the Republic of Belarus in 1991. A national constitution was drawn up the same year, and the first elections for presidency took place in 1994 which resulted in the appointment of Aleksander Lukashenko as Belarus' president. He has held the position ever since.

I never visited this and at my school we are planning a field trip!

I just loved your information about Minsk because it would love to go there one day.

It looks like a really interesting place to visit!